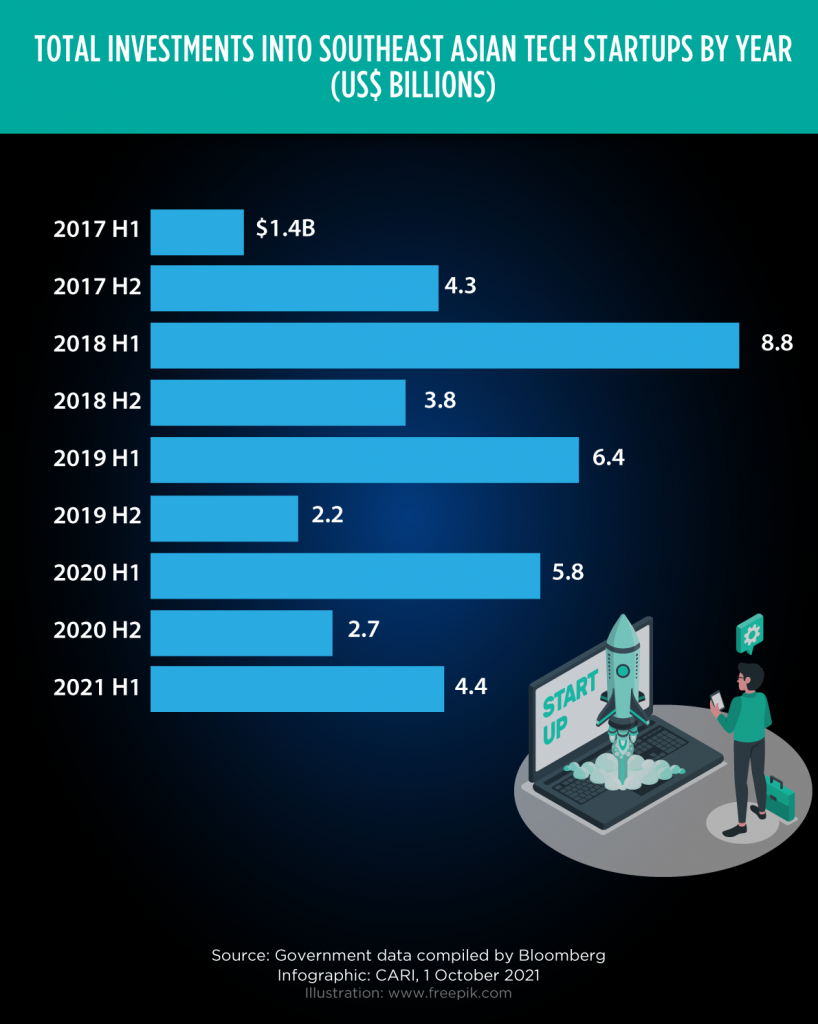 ASEAN
Southeast Asian tech startup deals hit record numbers in first half of 2021
(27 September 2021) The number of investments by venture backers in Southeast Asian tech startups hit a record number in the first half of 2021, although the value of those deals declined as investors focused on early stage deals in the region’s burgeoning digital market. There were 393 investments across the region in the first half of 2021, topping the previous record of 375 in the first half of 2019. Total capital raised however reached US$4.4 billion, down from US$5.8 billion a year earlier. The fall is mainly attributable to less outsized fundraising by unicorns such as Grab Holdings Inc. that dominated the region’s capital raising in the past but are now seeking to go public. The average deal size fell to US$11.2 million from US$17.7 million a year earlier, as investors focused on early-stage investments. Indonesia was the top destination for investment in Southeast Asia.

MALAYSIA
Malaysian government to consider allowing fully vaccinated Malaysians to travel abroad
(28 September 2021) The Malaysian government is to consider allowing fully vaccinated Malaysians to travel abroad, as well as to allow tourists to enter the country. The National Recovery Council chairman stated that the matter would be brought to the prime minister and an announcement would be made soon. This comes as the Council was informed that 90% of the adult population would be fully inoculated by early October, paving the way for the resumption of inter-state travel by mid-October. The Council was also informed that the rate of ICU bed utilization was also showing a reduction.

VIET NAM
Viet Nam’s GDP dropped by 6.17% year-on-year in the July-September period due to lockdown measures
(29 September 2021) Viet Nam’s GDP fell by 6.17% year-on-year in the July-September period due to ongoing lockdown measures in key economic regions including Ho Chi Minh City. This is the country’s first decline on a quarterly basis since 2000. The economy contracted during the third quarter after recording 6.57% growth in the previous three months. Viet Nam’s economy had grown by 2.69% in the third quarter of 2020. Viet Nam’s GDP grew by only 1.42% in 2021 though September. Final consumption, which accounts for about 70% of Vietnam’s GDP, fell 2.83% in the third quarter due to severe travel restrictions. However, exports grew by 5.2% in the third quarter. The Vietnamese government slashed its growth forecasts for 2021 to a range of 3.5% to 4% on 14 September. The Asian Development Bank likewise in September lowered its 2021 growth forecast for Vietnam to 3.8% from 6.7% in April.

INDONESIA
Indonesia’s parliament approves US$190 billion state budget for 2022
(30 September 2021) Indonesia’s parliament approved a US$190 billion state budget for 2022 on 30 September 2021. The 2022 budget also set an economic growth forecast of 5.2% for 2022, while reducing its budget deficit to 4.85% of GDP from a projected 5.8% in 2021. Earlier in the same day, a parliamentary commission approved a tax reform proposal that will introduce a carbon tax policy, overhaul the VAT system, expand income tax brackets, and offer another round of tax amnesty program. The tax reform bill will next be deliberated at the plenary level so it can be passed into law. This bill is expected to help Indonesia fund its spending and cut its reliance on debt markets. The Indonesian government has pledged to bring its budget deficit back to 3% of GDP by 2023 by streamlining spending and expanding revenue sources.

THAILAND, INDIA
Thailand looking to attract tourists from India during Diwali holiday season in November
(28 September 2021) Thailand will seek to attract Indian tourists during the Diwali holiday season in November 2021. This is expected to coincide with the planned waiver of quarantine for vaccinated visitors from 01 November onwards. Tourists from India are expected to make up for the expected absence of Chinese tourists, and Indian nationals composed the third largest group of visitors to Thailand before the global pandemic, behind the Chinese and Malaysians. Almost 2 million Indian tourists visited Thailand in 2019, when the country welcomed some 40 million tourists and generated more than US$60 billion in revenue. Thailand saw foreign tourist arrivals plunge to 73,932 in the first eight months of 2021.

JAPAN
Former foreign minister Fumio Kishida set to become next prime minister of Japan
(29 September 2021) Former foreign minister Fumio Kishida won a four-way race to become the next leader of the ruling Liberal Democratic Party (LDP) in Japan. He will be formally elected as prime minister in a parliamentary session scheduled to begin on 04 October. Kishida will lead the LDP in lower house elections in the autumn, as well as upper house elections in the summer. Kishida promised to compile an economic stimulus package worth hundreds of billions of dollars by the end of 2021, realize the vision of a free and open Indo-Pacific, make Japan an important international player through helping tackling important global issues such as global warming, and create a ‘new capitalism’ for the people which would tackle issues of inequality.

CHINA
Chinese manufacturing activity contracts in September 2021, with power cuts threatening further damage
(30 September 2021) China’s manufacturing purchasing managers index fell to 49.6 in September 2021, marking the gauge’s first drop below the 50 mark that separates an expansion of activity from contraction since February 2020, when the city of Wuhan and surrounding Hubei province were shut down to contain the COVID-19 outbreak. The gauge fell from a reading of 50.1 recorded in August 2021. This contraction in manufacturing activity comes as the Chinese economy is experiencing several issues which have beseted its initially strong economic recovery, including regional COVID-19 outbreaks, a global semiconductor shortage, port shutdowns and supply-chain disruptions, a widening regulatory campaign against the country’s tech sector, and rising commodity prices. Recent concerns about power outages and a possible downturn in the real estate market is expected to further add pressure on China’s economic growth moving forward.

AUSTRALIA
Australia to remove ban on international travel in November 2021
(01 October 2021) Australia will remove its restrictions on international travel in November 2021, one month ahead of schedule. The government will allow states that have reached 80% vaccination rate to welcome immunized overseas visitors, while Australians will be able to travel abroad with no restrictions on destination. The current cap on the number of arrivals allowed into the country will be removed, and returning Australians will only have to undergo a shortened seven days of home quarantine. The country has been subject to some of the strictest controls on overseas travel since the pandemic first broke out in March 2020, but with vaccination rates climbing there is an increasing push to wind down COVID-19-related restrictions.