With the theme “A Strategy for ASEAN: Cross Sectorial Perspectives”, this session brought together all NAF delegates to provide a summary of discussions at each of the first three roundtable discussions, as well as outlining a roadmap going forward for each sector. Sector Chairs and Co-Chairs from the Aviation, Connectivity and Infrastructure, Power & Utilities roundtables came together to each provide a summary of their individual roundtable discussions.

An underlying issue which was present in all three roundtable discussions was the need for more regulatory harmonisation. There was a shared call among the different stakeholders for stronger regulatory frameworks to be put in place in order to facilitate economic integration.

What are the other drivers of growth in ASEAN? As a total of 75% of trade in ASEAN is outward based, there is more that can be done to increase intra-ASEAN trade and investment. As ASEAN prepares for the formation of the AEC, many industries will face challenges to integration. The obstacles facing the automative industry include the streamlining of technical standards and custom processes across the region. Whilst the standardisation of 40% local content is clear, the question on what constitutes local content remains unclear. Until these policies and standards are integrated, ASEAN is still a long way off from becoming an automotive hub.

Despite the existence of a clear regional roadmap for integration of the shipping industry in ASEAN, significant political will and thorough economic integration is still required to make ASEAN a more competitive and dynamic player in the regional and global supply chain. The session also highlighted that economic integration will ensure higher quality food products that are not only used for export beyond ASEAN but also for domestic and intra-ASEAN consumption. This will also mean more movement of human capital in the sector which will help drive innovation and knowledge building in less developed food manufacturing markets in the region.

The third Plenary Session, set to the theme of ‘The Future of ASEAN’, revealed key concerns that may be of interest to policymakers. The session shone the spotlight on the chief executives of two fund houses—Zhang Lei of China’s Hillhouse Capital Management and Azman Mokhtar of Malaysia’s Khazanah Nasional Bhd—as well as Singapore’s High Commissioner to Malaysia, HE Ong Keng Yong. The session was moderated by Haslinda Amin, eminent news anchor for Bloomberg Television.

Mr. Zhang Lei, CEO of one of the leading investment firms in Asia stated that he would like to see greater entrepreneurship within the region that focused on building talent and innovation, rather than just gross assets and capital.

The Khazanah chief noted that there was a need for greater institutional capacity in the region to ensure that integration goes ahead seamlessly, but added that ASEAN members needed to ensure that the region’s regulations “don’t get in the way of business people who know what to do”.

Singapore’s High Commissioner to Malaysia, HE Ong Keng Yong noted that there was a need for more regional champions—businesses of scale—to emerge to forge the way forward. He noted that the current pace of development was slow, particularly with respect to infrastructure.

Much similar to the morning summation sessions, there were several consistent themes throughout all three afternoon roundtable discussions. Within the Financial Services and Capital Markets roundtables, stakeholders identified that despite these sectors being heavily regulated, there was an inherent lack of harmonisation between ASEAN members nations which was a key hindrance to a freer business environment. Healthcare faced similar issues of different levels of regulatory maturity between ASEAN states which inhibited integration. 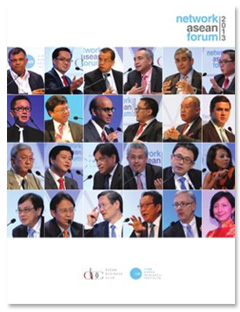