(This article contains 19 charts and best viewed on a desktop or horizontally on your mobile.) 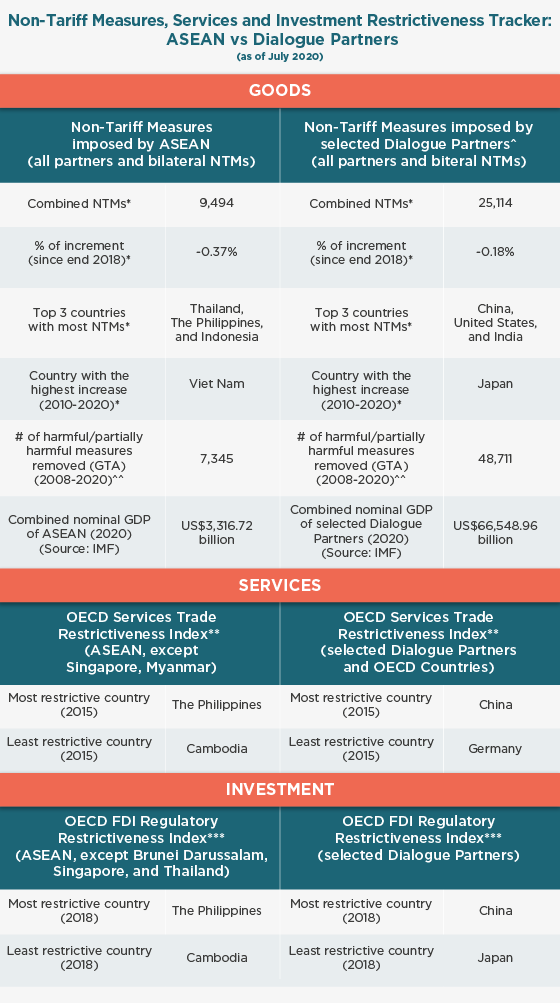 Non-tariff measures (NTMs) are policy measures, other than ordinary customs tariffs, that can potentially have an economic effect on international trade in goods, changing quantities traded, or prices or both1.

In the goods sector, the United Nations Conference on Trade and Development (UNCTAD) is the primary source of NTM data worldwide. UNCTAD collects NTM data from 190 countries affecting the import and export of goods. Within import measures, classification of data is divided into technical and non-technical classifications (Table 1).

Understanding and analysing NTMs are challenging due to the heterogeneous nature of definition, classification and measurement across countries and different economic players.

2. Overview of NTMs in the ASEAN

a) NTMs in ASEAN have more than doubled since 2008

Breaking down the total number of ASEAN NTMs by Member States in 2020, we see that Thailand imposed the largest share of NTMs at 34.5%. The Philippines came second at 12.9%. The NTMs of both countries collectively make up 47.4% of total ASEAN NTMs in 2020 (Diagram 2).

Amongst the categories of NTMs implemented in 2020, technical barriers to Trade (TBTs) ranked as the most commonly utilised measure at 36.3%, followed by Sanitary and Phytosanitary (SPS) at 29.5%. Both collectively compose 65.8% of total ASEAN NTMs applied to all partners (Diagram 3).

d) The high TBT figures in ASEAN are driven by Thailand, followed by The Philippines, Indonesia, and Malaysia

Breaking down the number of NTMs used in 2020 by country, the high TBT figures were driven by Thailand, followed by The Philippines, Indonesia, and Malaysia respectively. As a share of total enforced NTMs, however, Singapore’s total number of enforced TBT measures constituted 49% of their total measures (Diagram 4).

(I) By aggregate, Thailand overwhelmingly had the largest number of TBT measures compared to other ASEAN countries, at 1,099. The following country, Indonesia, only had 431 measures (Diagram 5).

(II) Likewise, Thailand also had the largest number of SPS measures in 2020 at 1,258, with The Philippines coming in second with only 364 measures (Diagram 6).

While Viet Nam had a smaller number of cumulative NTMs compared to other ASEAN countries as of May 2020, it saw a larger rate of increase between 2010 and 2020, at 609.17%. In comparison, Thailand only saw a 67.81% increase within the same period.

In understanding the degree of usage of NTMs by countries, there is no perfect measure, however, the following two key metrics are typically used:

d) Varying degrees of NTM FIs in agriculture, manufacturing and natural resources sectors: all ASEAN countries imposing NTMs on more than 80% of all their agricultural exports

Despite the usages of FI and TCR, both do not adequately capture the actual trade protection policies as a result of NTM imposition6. In attempts to define and measure the unseen cost of NTMs, Kee et al. (2009) utilises quantitative based measures and estimated the ad valorem equivalents (AVEs) of the NTMs for each country at the tariff line level7.

b) Overview of AVEs of NTMs in ASEAN

5. The relationship between NTMs and trade: Positive Outcome

a) Transparent NTMs may lead to increased export volume

Chen, Otsuki and Wilson in a 2008 study examined the importance of various types of standards for the export decisions of developing-country firms.12

Using information from the World Bank TBT survey database, they found that different types of standards exhibit sharply distinct relations with the intensive and extensive margins of exports of firms.

b) Harmonisation of standards may reduce costs of compliance

They suggest that while country-specific standards increase the marginal and fixed costs of exporting for African firms, the use of international standards as the basis for harmonisation may reduce their costs of compliance.15

More generally, the results suggest that efforts to promote African manufacturing exports in high-income countries should include the international harmonisation of standards.16

a) Combined NTMs of ASEAN outnumbered its dialogue partners

ASEAN’s total number of NTMs in 2019 outnumber the number of NTMs imposed by each of its eight major Dialogue Partners, with the closest being China with 7,255 NTMs (Diagram 11). However, it is important to note that a more meaningful comparison should be made between individual countries as opposed to comparing a mixture of countries and economic blocs.

However, when ASEAN is divided into individual countries, the NTMs of almost all Dialogue Partners surpass the majority of ASEAN countries (save Thailand) in terms of total NTMs. Only the European Union has less NTMs than all ASEAN countries save for Cambodia and Myanmar (Diagram 12).

While ASEAN had a higher total of NTMs, in terms of bilateral measures, the NTMs of the US outnumbered the bilateral NTMs of the ASEAN bloc by 2,651 to 1,629 respectively (Diagram 13).

a) The nature of the services industry is not as tangible as the goods industry and thus the measures being used are less standardised, granular and readily available. The typical measure of non-tariff trade barriers (NTBs) in the service sector is the OECD Services Trade Restrictiveness Index (STRI).

b) There are several limitations with the STRI measure which are unavoidable but should be noted when interpreting STRI data. As the STRI is a binary indicator, it requires the judgement of experts to determine if a country meets the measure threshold, which will inadvertently lead to subjective judgement. Furthermore, the STRI is not a numerical-based indicator and thus does not provide information on price or cost impacts for the specific services being traded.

c) It should be noted that for analysis on ASEAN, data on Singapore is not included in the OECD STRI database. As Singapore makes up roughly 51% of ASEAN service trade, a holistic view of ASEAN NTMs using STRI data will be handicapped. 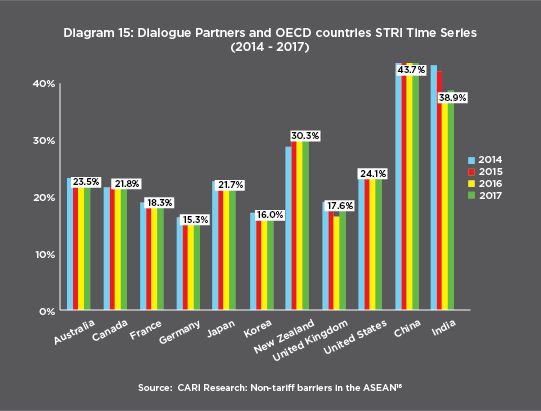 The composition of ASEAN services trade has remained unchanged from 2000, it is concentrated in 3 countries – Singapore (47.09%), Thailand (17.53%), and Malaysia (10.88%) accounting close to 80% of ASEAN’s services exports. The imbalance of the services trade in ASEAN is also reflective of the different levels of development across ASEAN.20

2. Overview of Investment Restrictiveness in ASEAN

a) Cambodia has the least regulatory restrictiveness in FDI in ASEAN

Between 1997 and 2018, there has been a marked decline in many ASEAN countries FDI Restrictiveness Index scoring. By 2018 results vary across significantly ASEAN, ranging from as high as 0.37 (The Philippines) to as low as 0.05 (Cambodia) (Diagram 16). During this period only Cambodia’s index score was lower than the OECD average of 0.065.

In 2018 the average FDI restrictiveness in the select ASEAN economies featured in the index was higher than most of ASEAN’s Dialogue Partners with the exception of China, New Zealand, and India (Diagram 17).

According to the OECD Investment Policy Reviews Southeast Asia published in March 201823, five ASEAN countries (The Philippines, Myanmar, Thailand, Malaysia, and Lao PDR) are now among the top ten most restrictive countries for FDI among the over 60 economies covered by the FDI Restrictiveness Index at the time (Diagram 18). 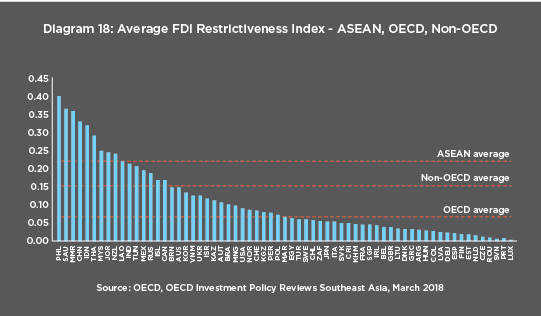 Although many ASEAN countries have among the most restrictive FDI regimes worldwide, especially in primary and service sectors, certain countries such as Malaysia and Viet Nam have also been among the most active FDI reformers between 1997 and 2016 (Diagram 19).24 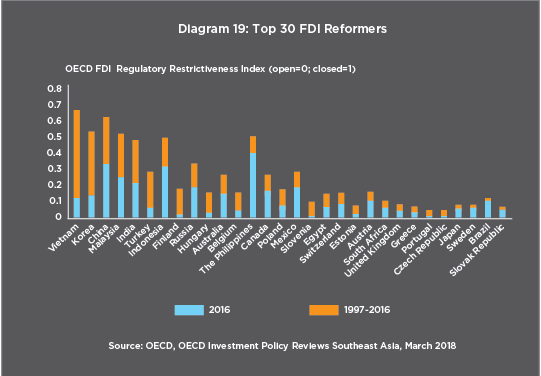 It should be noted, however, that although collectively ASEAN imposes a larger number of NTMs as compared to its major Dialogue Partners, when broken down into individual countries the NTMs of almost all Dialogue Partners surpass the majority of ASEAN countries (save Thailand) in terms of total NTMs. Only the European Union has less NTMs than all ASEAN countries save for Cambodia and Myanmar.

To truly understand the impact of NTMs it is also necessary to look at the Frequency Index and Trade Coverage Ratio, which measure a country’s usage of measures on total imports by volume and value.

CARI’s internal calculations found that while Thailand had the largest number of NTMs, its FI and TCR scores in 2017 were below the ASEAN average across almost all NTM categories. On the other hand, Lao PDR, despite only composing 5.5% of ASEAN’s total 2020 measures, had the highest FI and TCR score among all ASEAN countries in 2017.

d) Not all NTMs hinder trade

The assumption that all NTMs hinder trade volumes is not necessarily consistent.

When looking at NTMs affecting the trade of services, the OECD Services Trade Restrictiveness Index (STRI) found that the STRI average in ASEAN was significantly higher than both the major OECD economies as well as non-OECD economies such as China and India.

The average FDI restrictiveness in ASEAN (latest available data 2018) was higher than most of ASEAN’s Dialogue Partners with the exception of China, New Zealand, and India respectively. However, between 1997 and 2018 most ASEAN countries saw a decline in their respective OECD FDI Restrictiveness Index scoring.

The high FDI Restrictiveness Index scores for many ASEAN countries are often due to the relatively closed nature of these countries’ services and primary industries sectors, in comparison to their relatively open manufacturing sectors. The relative success of attracting foreign investments in their manufacturing sectors may put less pressure on ASEAN governments to open up other sectors.