For the past few years, the Philippines has been one of ASEAN’s economic stars. The economy grew at 6.9% yoy in 2016. Although the 1Q17 growth was only 6.4% yoy on the back of lower government and consumer spending, economy is expected to expand by 6.7% in 2017, due to large-scale infrastructure projects that will give the economy a boost. The performance of exports improved recently, however, robust domestic demand and import intensive infrastructure investments will mean that import growth will continue to outpace exports, leading to an increase in the trade deficit. The current account, however, should continue to post a healthy surplus thanks to foreign remittances.

Inflation climbed to 3.4% in March driven mainly by increasing food and oil prices. Although, it remained within the Filipino central bank’s (BSP) target range of 2% to 4%, it was closer to the upper limit of the range, which along with currency depreciation pressures might result in BSP increasing the interest rate near the end of 2017. The success and timeliness of tax reform, is the key risk factor to the overall positive outlook as it will determine whether the government will have the fiscal space to fulfill its infrastructure investment agenda.

Trade: Strong exports to be outpaced by imports

Inflation pressures and weakening peso might result in rate hike 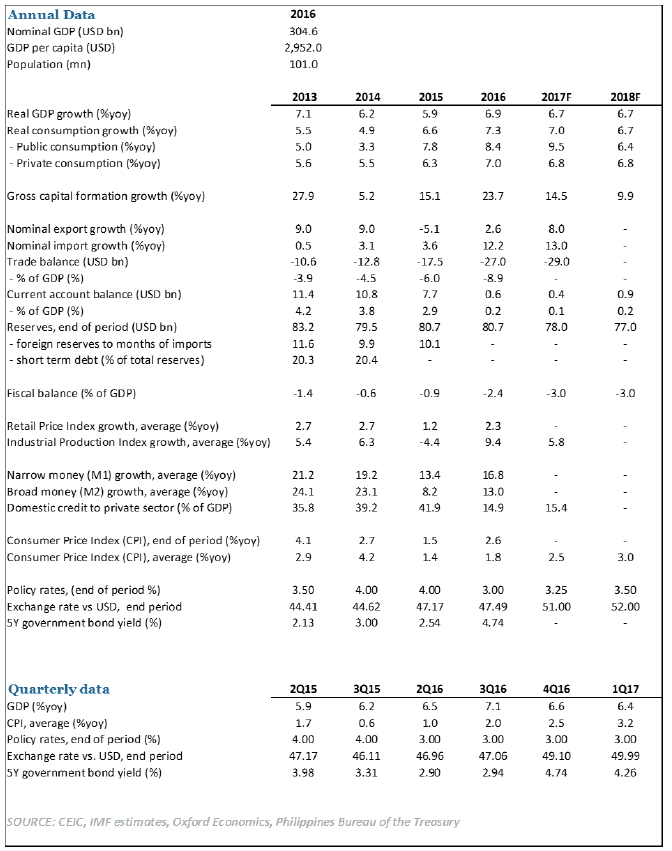 1 Measured by volume of production index