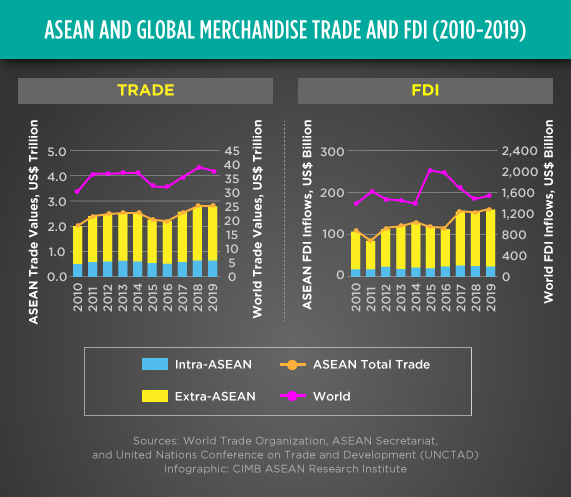 ASEAN-India economic ministers discuss AITIGA at meeting
(31 August) Economic ministers at the 17th ASEAN-India Economic Ministers Consultations discussed the ASEAN India Trade in Goods Agreement (AITIGA). The virtual meeting held on 29 August was co-chaired by Vietnam’s Minister of Industry and Trade Tran Tuan Anh and India’s Minister of Commerce and Industry & Railways Piyush Goyal. The ASEAN India Business Council (AIBC) Report has recommended that the AITIGA, which entered into force in 2010, be reviewed for mutual benefit. The ministers instructed senior officials to start the discussions to determine the scope of the review at the earliest to make the free trade agreement more user-friendly, simple, and trade facilitative for businesses. The review is intended to update the AITIGA with modern contemporary trade facilitative practices, and streamline customs and regulatory procedures. Apart from AITIGA, ministers at the meeting reaffirmed their commitment to take collective actions in mitigating the economic impact of the COVID-19 pandemic.

ASEAN holds first economic dialogue with UK post-Brexit
(28 August 2020) After the UK’s exit from the EU, the first UK-ASEAN Economic Dialogue was held on 26 August. The virtual economic dialogue was co-chaired by Liz Truss, UK Secretary of State for International Trade and the 2020 Chair of the ASEAN Economic Community Minister Tran Tuan Anh of Vietnam. The UK and ASEAN committed to working together to sustain and deepen the close economic ties between them; mitigate the economic impact of COVID- 19; strengthen economic resilience; and pursue sustainable economic growth that keeps markets open and transparent. The UK also committed to supporting ASEAN through initiatives that include providing technical assistance to develop green financial systems and energy efficiency across the region via the US$18.8 million (£15 million) Prosperity Fund ASEAN Low Carbon Energy Programme and US$15.9 million (£12 million) global Green Recovery Challenge Fund.

Ho Chi Minh City sustains export growth in the first eight months of 2020
(4 September 2020) Vietnam’s Ho Chi Minh City recorded a 4.0% year-on-year increase in exports in the first eight months of 2020, according to the local Department of Industry and Trade. Industrial products accounted for US$19.93 billion while agro-forestry-fishery exports accounted for more than US$3 billion. Imports fell by 2.8% to US$32.07 billion. Ho Chi Minh’s biggest export market was China, which accounted for US$6.84 billion or 26.2% of total shipments, followed by the US with US$4.45 billion. The city’s index of industrial production in the first eight months grew by 8.55% month-on-month. Nguyen Phuong Dong, deputy director of the department, said the city has managed to sustain economic growth in 2020 despite the COVID-19 pandemic thanks to the efforts made by the government to control it. He said more measures would be taken to boost the economy during the rest of 2020.

Malaysia to impose entry ban on countries with more than 150,000 COVID-19 cases
(3 September 2020) The Malaysian government plans to impose an entry ban on citizens of countries recording more than 150,000 cases of COVID-19 beginning 7 September, Senior Minister (Security Cluster) Ismail Sabri Yaakob announced on 3 September. The countries in the list include the US, Brazil, France, UK, Spain, Italy, Saudi Arabia, Russia and Bangladesh, as well as three countries announced previously, namely India, Indonesia and the Philippines. The minister clarified that those coming to Malaysia for emergency cases or those involving bilateral relations will still be allowed but with permission from the country’s Immigration Department. Malaysian citizens from high-risk countries listed are permitted to return home but will be subjected to the 14-day mandatory quarantine as stipulated in the standard operating procedures (SOP).

Tourism Authority of Thailand pledges to eliminate dual pricing for expatriates
(4 September 2020) The Tourism Authority of Thailand (TAT) plans to discuss stopping dual pricing for expatriates with the National Parks, Wildlife and Plant Conservation Department, as well as famous tourism sites. According to TAT governor Yuthasak Supasorn, the “We Travel Together” stimulus campaign is carried out with budget from the Loan Act, which has a clear mandate and objectives that make it hard to include foreigners and this results in dual pricing. Yuthasak said the removal of dual pricing will let expats save money, allowing them to spend more as a key target to boost domestic tourism. The agency wants to introduce an identity card to verify expats’ status, helping to distinguish them from tourists so they will be charged the same price as locals.

Parliament deliberating changes to central bank law, including allowing ministers to vote on monetary policy
(2 September 2020) Indonesia’s parliament will be deliberating potential changes to central bank law which would, among other things, give government ministers voting rights at monetary policy meetings and expand the central bank’s mandate to include supporting economic growth and employment (as opposed to the bank’s current mandate of maintaining the stability of the rupiah). These recommendations were presented to parliament by an expert panel on 31 August 2020, and following news of the recommendations, the rupiah weakened against the dollar, suggesting investor concerns over the future independence of the central bank. The rupiah was already one of the weakest currencies in Asia in 2020, partly due to investor fears over the central bank’s recent policies of helping the government finance a larger deficit through the purchase of government bonds.

Brunei’s GDP expected to expand 2.2% in 2020 despite slowdown in global economy
(1 September 2020) Brunei’s GDP is projected to grow by 2.2% in 2020 despite a slowdown in the global economy, according to a report by ASEAN+3 Macroeconomic Research Office (AMRO) released on 31 August. The country’s inflation rate is expected to measure at 1.3% in 2020 in part due to the weakening of the exchange rate. AMRO predicts a strong external sector despite a projected continued reduction of the current account surplus in 2020 in light of declining oil and gas prices. The fiscal balance is expected to return to a deficit of 7.2% of GDP in the fiscal year 2019/2020, and increase further to 11.1% of GDP in the fiscal year 2020/2021.

Lao Telecom launches 5G system
(1 September 2020) Lao Telecommunications Pcl (Lao Telecom) officially launched its 5G network, the first of its kind for Laos, and commemorated the occasion in a ceremony held on 31 August. For the initial 5G service area, Lao Telecom will first provide services in some areas of Vientiane, such as in community areas of the city centre like Sihom village, and the night street market along the Mekong River, Sailom village and the National University of Laos (Dongdok Campus). For the second phase, service will be extended to major provinces around the country. Lao Telecom is a joint venture between the Lao government (51%) and Singapore-based Shenington Investments Pte Ltd (49%), which is a subsidiary of Bangkok-based satellite operator and satellite communications provider Thaicom Pcl.