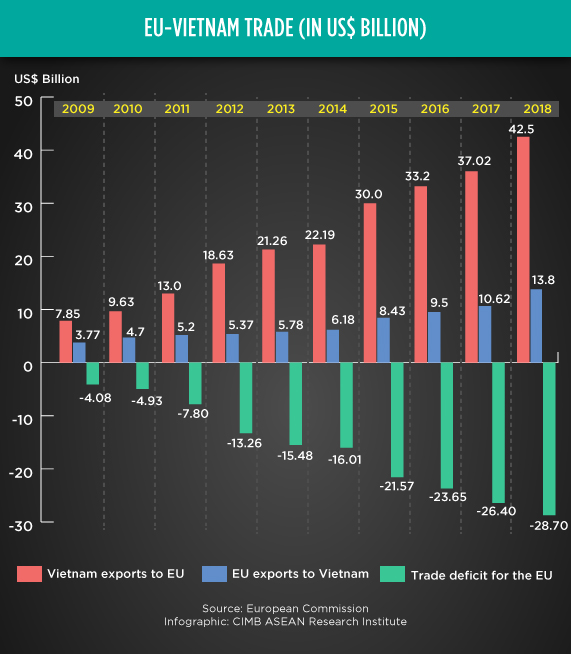 Vietnam, EU sign landmark free trade deal
(30 June 2019) Vietnam and the European Union (EU) inked the landmark EU-Vietnam Free Trade Agreement (EVFTA) on June 30, making it the second ASEAN member to do so. The agreement effectively eliminates 99% of tariffs between the countries, although certain tariffs will only be phased out over a ten-year period and certain goods will be limited by quotas. The agreement, which was in negotiation for over three years, was signed in Hanoi by EU trade commissioner Cecilia Malmstrom and Vietnamese industry and trade minister Tran Tuan Anh. The EU, for their part, called the EVFTA “the most ambitious free trade deal [it has] ever concluded with a developing country.” Vietnamese minister Tran Tuan Anh, for his part, penned an article outlining the benefits of the EVFTA, which he says is not only limited to opening up new markets for Vietnamese goods, but also provides improved regulations for the development of services, investments, public procurement, e-commerce, intellectual property rights, state-owned enterprises and sustainable development. The EU is Vietnam’s second-largest export market after the US, with main exports including garment and footwear products.

US slaps import duties of more than 400% on Vietnam steel
(2 July 2019) The US Commerce Department announced on July 2 that it has imposed tariffs of up to 456.23% on steel imports from Vietnam that were originally produced in South Korea and Taiwan as part of the department’s crackdown on what it considers to be tariff evasion by steel producers from the two countries. More specifically, the tariffs will apply to steel produced in South Korea or Taiwan that are then shipped to Vietnam for minor processing, before being exported to the US as corrosion-resistant steel products and cold-rolled steel. US President Donald Trump described Vietnam as “almost the single-worst abuser of everybody” as he vowed to crack down on parties abetting companies rerouting their goods through Southeast Asian countries such as Vietnam and Cambodia in order to circumvent US tariffs on their country of origin. The Vietnamese Ministry of Foreign Affairs did not respond to a news outlet’s request for comment, while the US Embassy in Hanoi said this week that it hopes the Vietnamese government will “take steps in the near term to address our concerns in a constructive manner.”

Cambodia launches National Single Window
(1 July 2019) The Cambodian Ministry of Economy and Finance in a statement dated June 25 launched its National Single Window (NSW) facility to boost the country’s trade capabilities and to further align its trade procedures in accordance with the ASEAN Single Window and ASEAN Economic Community 2015. With this, parties trading with and transporting to Cambodia can submit a set of standardised documentation at a single entry point to fulfil all import, export and transit-related regulatory requirements. Furthermore, the NSW also began issuing the ATIGA e-Form D on June 28 — a certificate of origin for exports and imports within ASEAN to help expedite the electronic exchange of customs data between ASEAN countries, thus enhancing trade efficiency among ASEAN members. The launch of the NSW was well received by the Cambodia Freight Forwarders Association, who said that the NSW will help significantly reduce the required paperwork and tackle corruption since an electronic system removes the need for a middle man.

ASEAN manufacturing index falls as operating conditions worsen
(2 July 2019) Southeast Asia’s manufacturing employment fell at its quickest pace in 20 months while manufacturing output continued to decline in June, recording only 49.7 in June on the IHS Markit Purchasing Managers’ Index (PMI), down from 50.6 in May. However, the agency noted that while Southeast Asia as a whole recorded its first slowdown in four months, five of the seven countries in the region that it monitors continued to report even stronger output. Of the five countries, Myanmar’s manufacturing sector recorded the strongest growth at 53.0, Vietnam recorded 52.5, while growth slowed in the Philippines (51.3), Thailand (50.6), and Indonesia (50.6). Meanwhile, Malaysian manufacturing saw its ninth consecutive month of deterioration (47.8), while Singapore saw a sharp drop (42.9). According to IHS Markit economist David Owen, the region’s weak growth in June can be attributed to weak demand and falling employment, in line with ongoing struggles in the global manufacturing industry.

Indonesia and South Korea hope to ink trade agreement by November
(28 June 2019) South Korea and Indonesia are in negotiations on a Comprehensive Economic Partnership Agreement (CEPA) which they hope to sign by November during the ASEAN-ROK summit on November 25, South Korean President Moon Jae-in said. Moon’s comments were made during his bilateral meeting with Indonesian President Joko Widodo on the sidelines of the recent G20 Summit. According to Moon, the CEPA will not only carry the benefits of a bilateral free trade agreement but also include provisions that will broaden bilateral economic cooperation beyond trade. Moon also expressed particular interest in leveraging South Korea’s technological capabilities to partner with Indonesia on infrastructure development, as well as on other joint projects such as the development of a next-generation fighter jet. Separately, South Korean finance firm APRO Financial Co Ltd. announced that it will soon merge with Bank Oke and Bank Dinar Indonesia in an expansion plan that would involve acquiring 19 existing Bank Oke branches across Indonesia and opening 50 new branches in the next three years, thus enabling APRO to serve Indonesia’s retail, wholesale and small and medium enterprise (SME) sector.

Indonesia, Japan aim to sign new economic partnership agreement this year
(3 July 2019) Indonesian trade minister Enggartiasto Lukita shared on July 3 that President Joko Widodo also held talks with Japanese Prime Minister Shinzo Abe on the sidelines of the G20 Summit, during which both sides agreed to expedite negotiations on their new bilateral economic partnership agreement — the General Review Indonesia-Japan Economic Partnership Agreement (GR-IJEPA) — and have it signed by year end. Both sides also agreed to work towards finalising the Regional Comprehensive Economic Partnership (RCEP) this year. Separately, Toyota announced on June 29 that it will invest around US$1.9 billion in Indonesia from now till 2023 to boost the company’s hybrid car production capacity and prepare for the future growth in demand for electric vehicles. The move follows Toyota’s 2017 announcement that it was aiming for electric vehicles to account for over half of its global sales by 2030. The company manufactured around 200,000 cars in Indonesia last year.

Indonesia, India aim for US$50 billion in bilateral trade by 2025
(29 June 2019) Indonesian President Joko Widodo and Indian Prime Minister Narendra Modi held bilateral talks on June 29 on the sidelines of the G20 Summit, which concluded with both sides agreeing to aim to reach US$50 billion in bilateral trade by 2025, according to the Indian Ministry of External Affairs. The leaders also discussed ways to elevate bilateral cooperation, especially in the areas of trade, investment, defence and maritime security. According to the Indonesian government, trade between India and Indonesia rose reached US$18.13 billion in 2017, up 28.7% from US$12.9 billion in 2016. Meanwhile, Indonesia’s exports to India reached US$14.08 billion in 2017, while its imports from the same reached US$4.05 billion.

PH, France look to boost economic cooperation
(30 June 2019) Filipino trade and industry secretary Ramon M. Lopez hosted a business delegation from France led by French foreign affairs secretary of state Jean Baptiste Lamoyne for their 8th Joint Economic Commission (JEC) held in Makati City. While no specific agreements were signed during the meeting, both leaders concluded the meeting by signing the Summary of Discussions of the 8th JEC, which included several considerations to promote stronger bilateral relations between the countries. This includes greater cooperation in the fields of critical aerospace, auto-electronics, electronics design, shipbuilding, maritime, renewable energy, green technology, e-commerce, and research and development. The Philippines also raised the possibility of reviving direct flights between the countries, and invited France to help grow its startup and creative industries. The French delegation, for their part, encouraged the Philippines to hasten its economic liberalisation, particularly in its public service and retail trade sectors. Trade between the countries grew 52.43% in 2018 reaching US$2.64 billion, up from US$1.73 billion in 2017.

World’s top natural rubber producers committed to developing Rubber City
(30 June 2019) The world’s and Southeast Asia’s three top natural rubber-producing countries are committed to the continued development of the Rubber City in the Indonesia-Malaysia-Thailand Growth Triangle (IMT-GT), said the IMT-GT’s regional cooperation head Firdaus Dahlan. According to Firdaus, the IMT-GT will focus on the development of downstream activities and the manufacturing of value-added products to boost rubber consumption and stabilise the price of rubber in the global market. To this end, a private sector-led project implementation team will be formed to explore opportunities in the growth triangle’s downstream rubber industry. There are presently four Rubber City sites: one each in Malaysia’s Kedah and Thailand’s Songkhla, as well as Indonesia’s Tanjung Api-Api and Sei Mangkei Special Economic Zone (SEZ). The three countries account for 66% of global natural rubber production.

Thai PM submits resolutions from the ASEAN Summit to the G20
(29 June 2019) Thai Prime Minister Prayut Chan-ocha said that he, as this year’s ASEAN Chair, has submitted resolutions from the recent 34th ASEAN Summit to the G20 meetings held in Osaka on June 28-29. According to Prayut, most of the Southeast Asian bloc’s views were in line with that of developed and developing countries. He added that he also disagrees with the view that the G20 grouping does not place much importance on ASEAN, saying that the bloc may feel overlooked simply because the region has “very few regional conflicts,” with the exception of the South China Sea dispute. According to the Bangkok Post, Prayut also said that the EU is now willing to normalise ties and increase trade and investment with Thailand, since the country has “returned to democracy.”