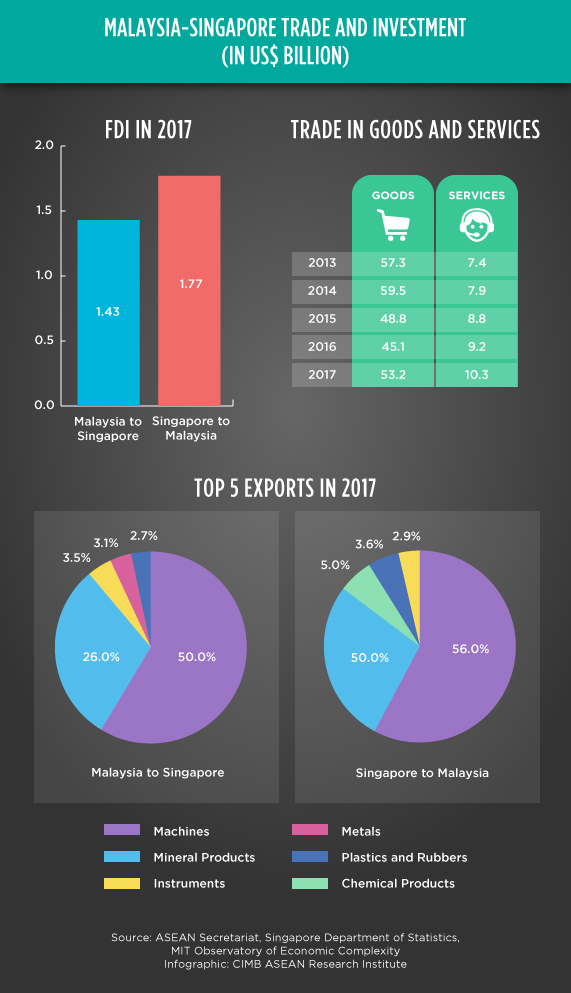 9th Malaysia-Singapore Leaders’ Retreat held in Putrajaya
(9 April 2019) The 9th leaders’ retreat between the prime ministers of Malaysia and Singapore held in Putrajaya concluded on April 9 with both leaders reaffirming their commitment to preserving and improving their vital bilateral ties, as well as to explore cooperation in new areas. According to the joint leaders’ statement issued after the meeting, this includes agreements to: (i) establish a joint committee within a month to resolve disputes over the Johor Bahru Port Limits off Tanjung Piai and Singapore Port Limits off Tuas; (ii) find new, innovative ways to enhance security and efficiency at the Causeway and Tuas Second Link checkpoint; (iii) explore ways to enhance cross-border connectivity, such as through Malaysia’s proposal for a new ferry route between the countries; (iv) withdraw their respective restrictions over the airspace between southern Johor and Singapore, thus paving the way for aircrafts approaching and departing Seletar Airport to be based on visual approach; (v) finalise the terms of the six-month suspension of the Johor Bahru-Singapore Rapid Transit System (RTS); (vi) explore possible ways to reduce the cost of the Kuala Lumpur-Singapore High Speed Rail (HSR); (vii) seek amicable solutions to the water price dispute, including through arbitration if needed; and (viii) explore potential collaborations in the development of the eSports industry.

Commuters in Malaysia and Singapore to benefit from dual-currency travel card
(9 April 2019) Singapore’s EZ-Link and Malaysia’s Touch ‘n Go announced on April 9 that plans to roll out a dual-currency “Combi Card” that allows users to pay in both Singapore dollars and Malaysian ringgits is currently underway. The announcement was made by the companies following a mention of the project in Prime Minister Mahathir Mohamad and Prime Minister Lee Hsien Loong’s joint statement at the closing of the Malaysia-Singapore Leaders’ Retreat on the same day, when the leaders spoke of plans to promote bilateral cooperation in the areas of data, cybersecurity and digital economy. The card, which will be introduced in the last quarter of 2019, will allow users to pay for electronic road pricing in Singapore, road tolls in Malaysia and parking charges in both countries — with plans to expand the card’s use for shopping and dining in the future. According to a joint statement by EZ-Link and Touch ‘n Go, the Combi Card is the first card in Southeast Asia which combines e-wallets from two countries. Touch ‘n Go currently has more than 23 million active Touch ‘n Go cards in circulation in Malaysia while EZ-Link has issued about 30 million Cepas ez-link cards in Singapore.

Indonesia, Malaysia send letter protesting EU palm oil curbs
(9 April 2019) Indonesian President Joko Widodo and Malaysian Prime Minister Mahathir Mohamad sent a joint letter of objection to the European Union (EU) on April 5 over its plans to phase out the use of palm oil in renewable transport fuel, according to a Reuters report. Reuters claims to have reviewed a copy of the document and provided the following excerpt: “Both our governments view this as a deliberate, calculated and adverse economic and political strategy to remove palm oil from the EU marketplace… Should this delegated regulation enter into force our governments shall review our relationship with the European Union as a whole, as well as its member states. This may include the reviewing of our partnership negotiations, procurements contracts and key imports from the EU.” Meanwhile, EU ambassador to Malaysia Maria Castillo Fernandez told The Malaysian Reserve that there was no trade war between the parties and neither were keen on starting one. She further emphasised that the bloc has no intention of ever placing an absolute ban on palm oil imports.

Four ASEAN central banks ink agreement to boost local currency transactions
(7 April 2019) The central banks of Indonesia, Malaysia, Thailand and the Philippines signed an agreement for the implementation of a Local Currency Settlement (LCS) framework to encourage the use of local currencies for internal trade transactions within ASEAN countries on April 5 on the sidelines of the ASEAN Finance Ministers and Central Bank Governors’ Meeting held in Chiang Rai, Thailand. Under the agreement, each country will seek to increase the use of local currencies in bilateral trade transactions in order to reduce their dependence on foreign currencies and accelerate financial integration among ASEAN countries. In furtherance of these goals, Bank Indonesia (BI) announced that it has also submitted a draft proposal to expand the use of local currencies in intra-ASEAN transactions to all ASEAN Member States. According to BI international department director Wahyu Pratomo, if all 10 member states agree to the draft after discussions later this year, the proposal could be approved during the next ASEAN central bank governors’ meeting in Vietnam in April 2020.

ASEAN reintroduces online trade consultancy portal ASSIST
(10 April 2019) The ASEAN Secretariat relaunched the ASEAN Solutions for Investments, Services and Trade or ASSIST programme on April 9 — a portal which allows companies registered in ASEAN countries to submit queries and complaints related to intra-regional trade. According to the secretariat’s trade facilitation expert Paolo Vergano, the website had to be relaunched because it received only six cases after launching four years ago. Vergano therefore urged businesses to make use of the service as it is not only free but also a way to relay questions to ASEAN governments without having to engage a lawyer in the country. However, he stressed that ASSIST only provides advice of a consultative nature and is not an avenue for dispute settlement, and that companies may have to wait for a response for up to three months since questions are relayed to local governments.

Thailand aims to be the destination of choice for aircraft MRO in ASEAN
(8 April 2019) Thailand’s Board of Investment (BOI) recently announced that it has approved investment incentives for aerospace companies who choose to set up their ASEAN base in the country. These incentives include eight years of corporate income tax exemption, an additional five years of 50% reduction of said tax after the initial exemption period, and a further two to four years of exemptions for projects based in the Eastern Airport City — Thailand’s planned flagship MRO hub — that works with local partners to develop the workforce. The move comes as part of Thailand’s 15-year aviation development plan to position itself as the ASEAN hub for aircraft maintenance, repair and overhaul (MRO) activity. At the heart of its plan is the Eastern Airport City project under the country’s Eastern Economic Corridor (EEC), which includes plans to expand U-Tapao Airport’s passenger capacity from five million to 54 million in the next three decades.

Hanoi plays host to Dutch Prime Minister’s official visit to Vietnam
(9 April 2019) Netherlands Prime Minister Mark Rutte’s official visit to Vietnam concluded on April 9 with both parties committing to work together to create new opportunities for Dutch businesses to invest and do business in the country. Furthermore, both sides agreed that the EU-Vietnam Free Trade Agreement (EVFTA) has the potential to give bilateral trade between the countries a significant boost, and they therefore urged all parties involved to support the signing and ratification of the agreement. According to Rutte, the Netherlands is presently Vietnam’s biggest European investor with investments worth over US$9.5 billion and bilateral trade in 2018 recorded at over US$7.84 billion. Separately, Vietnamese industry and trade minister Tran Tuan Anh inked a deal with Germany’s Siemens AG in Berlin that will see the company working with the Vietnamese government to develop “smart infrastructure for sustainable development” in accordance with the industry and energy cooperation framework between both governments.

Malaysian trade mission to the US eyes over US$1.5 billion in potential investments
(9 April 2019) The six-day Malaysian trade mission to the US led by international trade and industry minister Darell Leiking concluded on April 6 with several potential investments in hand. According to Leiking, the delegation facilitated several discussions during the trip, which could lead to investments worth around US$1.6 billion (RM6.6 billion) primarily in the electrical and electronics, and chemical industry. Most notably, Leiking announced during the trip that Microsoft Corp and MIMOS Berhad (an agency under Malaysia’s Ministry of Trade and Industry) will establish an applied artificial intelligence (AI) centre in the country that aims to equip local players with capacity development for “rapid response government policymaking” and “tools required to increase intelligence and leverage on modern technologies such as AI” in line with Malaysia’s National Policy on Industry 4.0 and the ASEAN Digital Skills Vision 2020. Meanwhile, Malaysian defence minister Mohamad Sabu is slated to visit Moscow on April 20 where he will reportedly negotiate a barter trade of Russian defence assets and Malaysian palm oil.

Singapore opens e-Commerce trade office in London to facilitate trade with UK businesses
(10 April 2019) The UK’s trade and export promotion minister Baroness Fairhead announced on April 10 that the Singaporean government has opened a trade and enterprise development agency known as SEED in London that aims to help UK businesses tap the growing ASEAN market through e-commerce. According to a statement by the UK government, SEED was established with the support of Enterprise Singapore in accordance with the Singapore-UK Partnership for the Future roadmap which was launched at the start of the year. The office will provide UK companies with services such as market research, data analytics and e-commerce strategy development with the aim of helping them access the ASEAN market through Singapore.