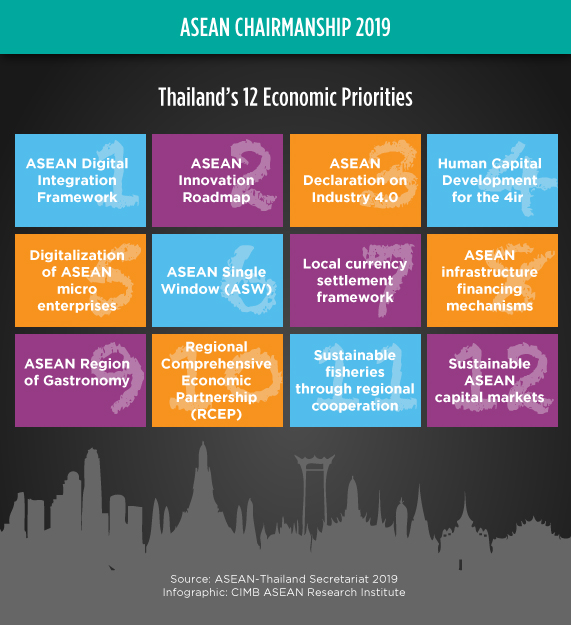 Thailand to host first Senior Economic Officials’ Meeting this month
(8 January 2018) The Thai Ministry of Commerce will commence its term as the new ASEAN Chair with the first ASEAN Senior Economic Officials’ Meeting (SEOM) in Bangkok from 12-18 January. According to the director-general of its trade negotiations department Oramon Sapthaweetham, 12 economic priorities will be proposed during the meeting. The priorities include issues such as preparing the ASEAN workforce for the fourth industrial revolution, expanding the ASEAN Single Window Customs Systems to include all ASEAN Member States, and the promotion of sustainable tourism in the region. The meeting will also discuss ASEAN’s cooperation framework with its 11 dialogue partners and the finalization of the Regional Comprehensive Economic Partnership (RCEP), which is meant to conclude this year.

Strong demand for Philippine global bond issue signals confidence
(8 January 2018) The Philippines raised US$1.5 billion in 10-year US dollar bonds to help fund its 2019 spending plan, making it the first emerging market to do so in the new year. According to its national treasurer Rosalia de Leon, the bonds carried a coupon of 3.75% and were priced at spread of US Treasuries plus 110 basis points, below guidance of plus 130 basis points amid strong demand. De Leon argued that this proved strong global investor confidence in the Philippine’s economic fundamentals. The move comes as the country looks to raise funds to support President Rodrigo Duterte’s infrastructure spending through bond offerings, which will include samurai and panda bonds.

Indonesia mulling over electric car regime options
(9 January 2018) The Indonesian government is currently weighing regulatory options as it moves forward with plans to increase the adoption of green vehicles in order to reduce its reliance on fossil fuel imports. According to a government source, the administration intends to adopt either a pure electric vehicle regime from the outset or start first with hybrid electric vehicles (HEVs). The source claims that industry minister Airlangga Hartarto prefers a gradual shift by first using HEVs, as these vehicles do not require charging stations and would therefore place less of a financial burden on the government, while energy and mineral resources minister Ignasius Johan prefers outright adoption of pure electric vehicles. The government is expected to announce presidential regulations and tax incentives to encourage the sale of electric vehicles and the development of a domestic electric car industry.

Cambodia’s single window system still in test phase
(9 January 2019) Cambodia’s national single window system is currently in its trial phase. The country has thus far upgraded the system to allow export certificates to be signed and stamped electronically, and is currently testing the cargo clearance system. Joining the ASEAN Single Window system is a priority for the country, said the director of its export and import department, who did not provide a specific implementation timeline. Further, the Cambodia Chamber of Commerce extolled the country’s progress in adopting the system but expressed doubts that it will be fully adopted by all ASEAN Member States this year.

Customs reforms and modernisation help boost cross-border trade
(10 January 2019) Vietnam is committed to reforming its cross-border trade mechanisms to ease the flow of goods and services across the border, said deputy director-general of general department of Vietnam customs in an interview with the Vietnam Economic Times. Touting the department’s modernisation initiatives, the senior official shared that the customs authority has continued to maintain stable operation of its e-Customs system, which has a 99.65% participation rate from enterprises currently working with customs agencies throughout the country. Furthermore, its national single window has processed over 1.6 million documents and attracted the participation of over 25,000 enterprises. Vietnam is also working with its ASEAN partners on the implementation and expansion of mechanisms under the ASEAN Single Window (ASW), especially in the exchange of certificates of origin.

Malaysia’s cashless conundrum
(9 January 2019) A study by Nielsen found that while 63% of Malaysians have a debit card, most still prefer to use cash when making payments for daily expenses. Of those surveyed, 93% prefer cash when dining out, 90% use cash when buying groceries, 89% use cash for public transport, 81% use cash for petrol, 81% use cash for taxis, and only 8% of Malaysians have adopted mobile wallets. The study also revealed that Malaysians prefer the convenience offered by online banking when it comes to recurring expenses such as phone and internet bills (53%), utility bills (47%), car loan instalments (38%) and rent (37%). Further, the study found that the public’s three main concerns when it comes to digital money are security and fraud, control and overspending, as well as merchant acceptance of mobile payment wallets.

Sluggish demand, tighter loan approvals weigh on Brunei property market
(7 January 2019) Prices of residential properties in Brunei are slipping due to lacklustre demand and increasingly stringent requirements for bank loans, say industry players. A recent report by Autoriti Monetari Brunei Darussalam (AMBD) found that Brunei’s Residential Property Price Index (RPPI) fell by 5.7% year-on-year to 85.5% in the third quarter of 2018, while it fell by 5.7% compared to the second quarter of 2018 on a quarter by quarter basis. AMBD also found that the median purchase price for all residential properties in the third quarter was US$183,000.