China will stand by its Belt and Road initiative. No question. It could hardly do otherwise given the high-profile promotion of its ambitious global undertaking–trumpeted as the nation’s foreign policy centrepiece and enshrined in the Chinese Communist Party Constitution.

This is Chinese President Xi Jinping’s brainchild–his vision of how the world’s economic and financial relations could be reshaped in the coming decades. This is the vision that launched the Asia Infrastructure Investment Bank (AIIB), a major diplomatic coup for Beijing that persuaded 57 countries to join the new multi-lateral lender as founding members despite American objections.

But China is in a very different place today from two years ago when the China-led AIIB was making global headlines and from three years ago when the renminbi clinched reserve currency status on joining the IMF’s Special Drawing Rights basket.

China today is battening down the hatches for the storm threatening its economy–a storm that will get worse each day that its tariffs confrontation with the United States drags on.

THE SHOW MUST GO ON

Beijing will continue to talk the talk on BRI projects but it is almost certain to drag its feet when walking the walk. The start of new projects (as opposed to opening ceremonies and inking new agreements) will slow and the financing available for projects is likely to be much less attractive.

The problems facing the Chinese economy is the reason why.

The widespread myth is that China has endlessly deep pockets and thus the wherewithal to do whatever it sets its mind to do. The truth is the Chinese economy is much less robust than is popularly believed. Suffice it to say that resources for external largesse cannot be unlimited in a nation with a GDP per capita of US$8,643 against the global average of US$11,730 (current prices).

This is the worst possible time for China to be confronting its biggest export market. The economy is already on a knife-edge. The problems are not cyclical, as some have argued. They are systemic. Among them:

The anecdotal evidence is even more alarming: An increasing number of Chinese firms owe more in interest than they earn after tax, the P2P sector has imploded with hundreds of firms collapsing within days, and continued pressure on capital outflows held back by an administrative firewall. And then there are numbers that just doesn’t look right. The 2017 increase in retail sales is not matched by a similar increase in output for consumer products over the period. For both numbers to be true, there would have to be some heroic de-stocking or wild price increases.

IT IS WORSE THAN IT LOOKS

China’s leaders are already preparing the nation for seriously tough times ahead. Weeks earlier, a state-run newspaper targeting the judiciary said courts should be prepared for a possible spike in the number of corporate bankruptcy cases as a result of the trade dispute.

Arguments that Chinese retaliation might force the US to back off from its tariff threats ignore the reality that Beijing has few retaliatory options that are cost effective.

The so-called nuclear option–China dumping its holdings of US Treasuries–assume that suicidal revenge is an overriding motivation in Chinese policymaking. Massive dumping of US Treasuries would certainly hurt the US but it is just as likely to decimate the value of China’s foreign exchange reserves with bond prices and the greenback doubtless going into freefall from such a massive sale. And this is without even considering the logistics of offloading more than US$1tr in US government paper onto the market in one fell swoop.

And China has a further handicap. Dollar for dollar, US tariffs carry the bigger clout. Chinese goods compete mostly on price in the United States. Not so American goods in China. The Chinese consumer does not pay for an iPhone because it is cheaper than the local product. But when tariffs are increased, the American shopper is likely to think twice about buying a Chinese t-shirt that will cost almost as much as one made in, say, North Carolina.

Yet, as in all conflicts, there are opportunities. An obvious near-term benefit for third-party countries are the supply gaps in both China and the US as tit-for-tat tariffs cut off established sources.

Malaysian exporters, especially palm oil producers, are already eyeing China’s soybean market. Last year, China imported 87% of the soybeans it needed of which a third was supplied by American farmers. Beijing is pulling out the stops to boost domestic production. But agriculture is not like manufacturing. Farmers cannot deliver more soya beans at short notice the way that manufacturers of toys or T-shirts can by cranking up overtime. And then there is weather–as Chinese farmers can attest. Unusually early frost hit parts of China in September damaging millions of acres of soybean fields.

But while China can be expected to import more from ASEAN, it will also be looking to sell more to these markets. Chinese steel and aluminium once destined for the US market might now be diverted to Indonesia. Although China is an important trade partner for ASEAN with two-way flows hitting a record US$514.8bn last year, the trade imbalance remains an irritant for these countries. Apart from Singapore, every ASEAN nation has a trade deficit with China.

Furthermore, China will be competing hard with ASEAN exporters for third markets in its bid to replace US demand. This will cause friction especially if the renminbi depreciates and a cheaper currency is seen as unfairly giving Chinese exporters an edge.

Beijing is aware it must tread carefully. Keeping its jobs-generating exports sector buoyant is not just about dollars and cents. The Chinese Communist Party will be celebrating its 100th anniversary in 2021. To have the economy humming along nicely is vital in presenting the nation with a convincing recording of outstanding performance by the ruling Party. It stands to reason that the government will give Chinese exporters every help even at the risk of upsetting some of its trade partners.

In the medium term, the benefit to ASEAN nations are more likely to come from the relocation of manufacturing capacity from China. Relocation helps producers selling to or sourcing from the US market to remain competitive.

And tariffs are just part of the relocation story. Production costs have been rising for some time in China. Manufacturers have already been relocating capacity across the supply chain to lower-cost countries such as Vietnam and Malaysia.

About a fifth of the companies surveyed by the American Chamber of Commerce in early September are thinking of transferring some or all of their manufacturing out of China, and another third are delaying or outright cancelling new investment on the Mainland. The European Union Chamber of Commerce in China found that one in six of the respondents to a survey of its members are also delaying investment or expansion while one in 14 are considering relocating.

Southeast Asia and India are among the popular destinations for companies fleeing the China-US tariffs confrontation. Some governments, notably Thailand, have lost no time in actively wooing these businesses and encouraging them to move production from China.

IMPORTANT BUT NOT URGENT

Although the BRI is important to the Chinese leadership, it is not an urgent priority. Far more immediate for the nation’s wellbeing–and the Party’s grip on power–is shoring up growth at home as US tariffs come into effect. And the case for setting aside funds for domestic stimulus projects rather than diverting much needed investment abroad will be far more compelling once job losses become a political issue.

Not that BRI funds will completely dry up. Beijing is pushing the private sector to invest more. And there is Hong Kong. In September 2018, its Financial Secretary noted in his personal blog that the Hong Kong Monetary Authority is considering investing in BRI projects for the first time.

Beijing will continue wooing the 10-nation bloc but will probably re-direct its efforts. Recipient nations such as Malaysia and Indonesia have been taking a more hard-headed approach to China’s BRI proposals. And in light of its own changed circumstances, Beijing might decide that efforts focussed more the other ASEAN-5 (Vietnam, Myanmar, Cambodia, Laos and the Philippines) might bring greater dividends. 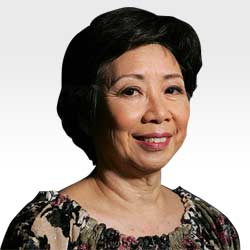 Pauline Loong is managing director of the Hong Kong-based research consultancy Asia-analytica. She is also a Senior Fellow of CIMB ASEAN Research Institute. She has earned an outstanding reputation as among the best-informed analysts of China’s political economy. She authors the wellknown “Loong on China” newsletter which has won accolades for its perceptiveness as well as its meticulous research and reliability.