The BRI in Southeast Asia

Five years after it began, if you had to summarise the BRI in one word, ‘connectivity’ would be it. But it is more than just the common one-dimensional view of connecting countries by hard infrastructure.

Economies that are well-connected are those which have a high degree of exchange of both the inputs into economic activity and the outputs from economic activity. Therefore connectivity between countries (not just countries with BRI related agreements in place) needs to be three-dimensional in order to deliver economic value for the local and international economy. These dimensions are (1) the cross border flow of goods and services, (2) capital, and (3) people. In the context of BRI, economies most active in all three dimensions of economic connectivity are likely to benefit the most from the initiative.

The first dimension is trade. China’s supply chain connectivity has risen across BRI regions over the past decade, but ASEAN economies remain the most connected. This is likely to reflect a continuation of outsourcing to China from high-cost economies in the region, such as Singapore and Malaysia, while Chinese firms themselves outsource lower value-added processes to the region’s cheapest economies such as Cambodia and Laos. Meanwhile, supply chain connectivity has also deepened across other BRI regions. The Former Soviet Union and South Asia regions are now almost as connected to Chinese suppliers as ASEAN economies were in 2005.

Singapore, Vietnam, Thailand, Malaysia, Cambodia, and Myanmar are all ranked amongst the top ten most connected to China via trade,1 and China continues to deepen trading relations with partner economies in Southeast Asia. The Free Trade Agreement (FTA) with ASEAN was the first of its kind, between China and a regional organisation, and was upgraded in 2014 as part of the BRI. Trade and investment flows have accelerated since this upgraded agreement came into effect in 2016. Several underlying dynamics are crucial in this respect.

For particularly low-cost economies, outsourcing from China has been fundamental. Growth in Chinese trade with Vietnam (up an impressive 25% in nominal US$ in 2016) has been driven by outsourcing the most cost-sensitive parts of electrical and machinery assembly, while food processing is a key sector for Cambodian trade with China, and Myanmar is cooperating (and indeed competing) with Chinese clothing manufacturers. China’s increasingly challenging demographics, and ever rising wage costs, mean that these channels of trade connectivity are likely to deepen in the years ahead.

Higher income economies in the region act as key inputs to China’s manufacturing itself. For example, Malaysia’s position at the cutting edge of microchip production means it supplied China with US$16bn worth of integrated circuits in 2016, second only to Korea in this respect. Singapore’s role as a global trade hub slightly complicates an assessment of the role domestic production plays in its exports to China, but again inputs to Chinese manufacturing predominate, including around US$7bn in chemicals, plastics, and rubber products. Both Malaysia and Singapore will likely become increasingly important as China’s manufacturing shifts into higher value-added sectors.

The full impact of ‘trade war’ is yet to be reverberated globally. However, uncertainty over policy action and reaction has been the most destabilising common denominator causing jitters across global markets. The most vulnerable economies include Cambodia, Singapore, Vietnam, Thailand, and Malaysia. These are open economies with export markets worth at least 70% of their GDP. They are strongly integrated into global supply chains, which could be disrupted by trade tariffs imposed.

The second dimension is capital. In a nutshell, this involves direct investment, portfolio investment, and official investment. Before 2013, China’s capital connectivity was focused on commodity-exporting economies because its priority was securing raw materials for domestic industrial activity.

In more recent years, capital connectivity with higher value-added economies has become more important. Rather than accessing materials, China is increasingly focussed on accessing technology. Thus, China’s role as an outbound investor has become increasingly important. Indeed, China has been a net exporter of capital since 2016. This is not necessarily entirely triggered by the BRI, but is driven by the current stage of China’s economic development cycle.

Unlike trade, capital–especially portfolio flow–is difficult to quantify. Despite the sprawling size of the BRI, no publicly available official data source keeps tally of all these investments. As a result, much of the available information is qualitative. In our analysis of 88 BRI countries,2 we estimate that over 1,100 investment projects were announced or are underway, worth more than a total of US$750bn, that can be considered BRI projects. These include infrastructure construction projects in BRI countries with Chinese involvement in financing, construction, or operating capacity, and Chinese investment directly into companies through merger and acquisitions.

The transport and logistics sector has by far the highest concentration of BRI investments, with roughly US$330bn of tracked projects in the 88 countries we follow. The energy and utilities sector has attracted the second most investment since 2013, at US$266bn. These two sectors together represent more than three quarters of the tracked total and are what are typically considered as the mainstay of the BRI.

Within transport and logistics, railways have attracted the highest value of investment at just under US$190bn. Road and automotive projects is the next largest sector with a total investment of US$66bn, followed by ports and shipping category at US$39bn, the majority of which is investment in new or expanded harbours and port facilities.

There are only a handful of projects investing in infrastructure to facilitate intermodal trade (transport of goods using multiple modes of transportation) and very little investment in aviation. Other tracked investments are spread across sectors less directly associated with public infrastructure projects, including heavy industry, technology and finance, real estate, and tourism. Within technology and finance, the largest investments come from Chinese entities into businesses in developed markets such as Singapore. Notable examples include a consortium of Chinese investors purchasing a Singaporean semi-conductor manufacturer.

From an investment and project finance perspective, the reliability of the business climate and the risk of appropriation are central concerns when weighing up a foreign investment decision. In our comparative analysis of the same list of 88 BRI countries,3 we find that Singapore is the highest ranked country in the BRI in terms of its business environment. The country’s strong adherence to the rule of law and the transparency of its institutions have long underpinned one of the most successful development stories of the past 50 years. At the other end of the scale, some ASEAN countries such as Laos and Myanmar, together with Afghanistan, remain extremely problematic climates for investors. Many of the countries across Central and South Asia on the face of it look to be dynamic with strong growth prospects, but viewed in terms of their tax and regulatory regimes or the robustness of legal institutions, start to look less favourable.

Whether the funding gap is US$4tr or US$8tr, the scale of financing required for BRI projects will be vast, and banks alone cannot be relied upon. According to the IFC (International Finance Corporation) the share of all infrastructure-financing in emerging markets coming from private sources was estimated at between 20% and 25%, with governments and development banks providing the rest. This contrasts with BRI projects to date where, according to our research, the share of tracked financing coming from private sources is less than 10%. In addition, it is large Chinese government-backed entities providing the majority of funding; other governments and multilateral development banks (MDBs) are estimated to have provided less than 10% of the total.

As such, generating interest from non-Chinese and third-party private sources remains a work in progress, though there are examples starting to emerge. With increasing demand from interested parties globally for enhanced transparency, risk mitigation, and environmental and social governance to be embedded into BRI project financing, joint cooperation with multilateral development banks is likely to be key for the future of BRI financing. The future will also involve new financing products to channel private assets, e.g. insurance and pension funds, towards BRI projects. This is where international financial centres such as Singapore and London will play an increasingly significant role in the BRI.

As hard infrastructure is thought to define BRI, soft infrastructure is often sidelined but it is equally important. An increasingly outward-looking Chinese population in search of education and tourism, plus a growing global appetite to visit China, have been key drivers in this respect.

Geographical proximity to China has served ASEAN and other neighbouring Asian Pacific countries well so far. Nonetheless, future success depends on the dynamism of policy targeted to engage both the public and private sectors with all three dimensions of economic connectivity with China. The BRI needs to be a catalyst for regional and global growth, not an excuse for China to seek further leverage. 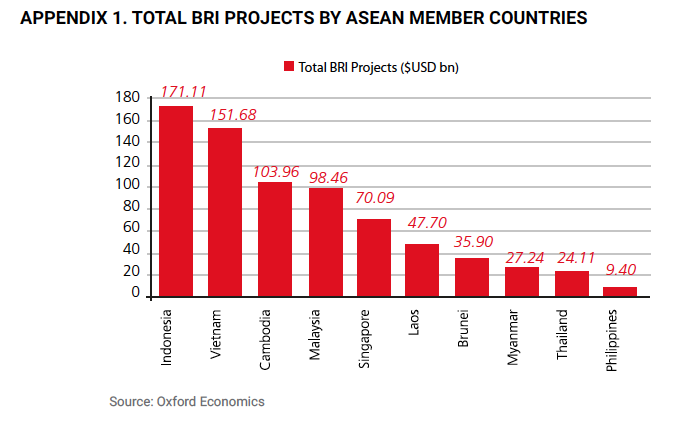 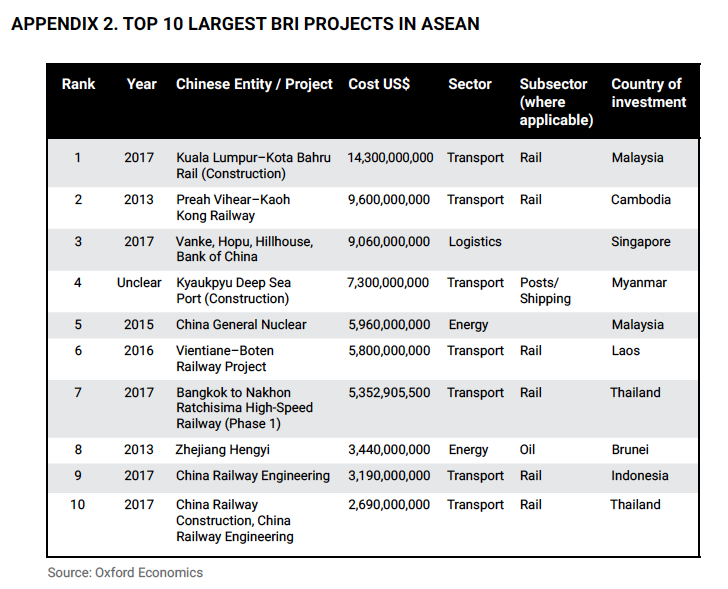 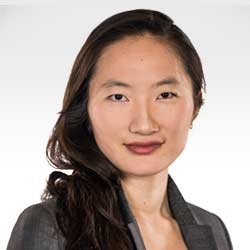