ASEAN is viewed to be amongst the most exciting places to invest over the next decade. The region is on track to reach a historic number of venture capital deals in 2017, with 244 deals accounting for nearly US$5 billion in total funding through 31th July. The wave of Venture Capital (VC) firms has already begun coming into the region for a few years, giving a lot of encouragement for the local ecosystem. This essay will look at how this wave is evolving across the countries in ASEAN and how much VC firms can bring to the table other than the capital.

Much of the ASEAN’s growth is rooted in macroeconomic trends that are seeing the expansion of the digital economies and middle classes. Deep-diving into the opportunity, the report commissioned jointly by Google and Singapore’s sovereign wealth fund, Temasek identified three main drivers for this optimism in the ASEAN region that will drive this explosive growth: a fast-growing young population of 70 percent being under 40, a growing middle class of consumers that will contribute significantly to GDP growth, and the lack of major retail establishments as compared to the rest of the world. Investments in ASEAN are growing in both frequency and size, particularly with regards to growth-stage financing. According to a CB Insights report, Southeast Asia has already seen more venture capital than any prior year with nearly US$5 billion in total funding. Relative to investment destinations like Malaysia and Indonesia, Singapore appears to be a crucial connector to other Asia Pacific and international markets. In case of the most successful regional companies, they have been actively cooperating in Singapore to obtain final-stage financing and most global VC firms expand into Singapore when they decide to invest in the region. Since 2012, Singapore has seen over 700 disclosed deals with an aggregate value of US$7.3 billion, the most of any country in the region, followed by Indonesia, Malaysia, and Vietnam.

There is an active interest in the region from technology investors as there has been an increased focus on B2B, robotics, and automation. Meanwhile, fintech-focused start-ups are expected to continue to garner significant investment in Asia. Apart from technology, the Google-Temasek also report showed that ASEAN’s internet economy was expected to be valued at more than US$200 billion within a decade. With around 260 million users in the region, ASEAN has become the 4th largest eCommerce market in the world. However, this market still remains underdeveloped, accounting for less than 1 percent of total retail sales, compared to rates of an average of 7 percent in Europe, China, and the United States. As early as 2025 the size of the eCommerce market is foreseen to grow into a US$88 billion market, led by Malaysia, Thailand, and Singapore. While online shopping experiences remained constrained five years ago, in 2016 some internet retailers reported that mobile already surpassed 50 percent of online sales across Southeast Asia. For example, the online sales of The Gioi Di Dong (MWG), Vietnam’s leading enterprise in the digital device distribution sector, grew 94 percent in 2016, far outpacing its competitors in Vietnam. Additionally, MWG is also one of a few Vietnamese businesses that have US$1 billion or more in capitalisation value.

In the last few years, quite a few VC firms have added eCommerce as a strategic pillar of investment…However, a key shortfall in the ASEAN ecosystem at this time are exit considerations for ventures…the region will need to show that it can provide more potential exits in a way that brings meaningful returns to entrepreneurs and investors.

In the last few years, quite a few VC firms have added eCommerce as a strategic pillar of investment. To illustrate, VC firms are prone to companies in the branded consumer space that showcase a strong desire to achieve profitability and have strong balance sheets. However, a key shortfall in the ASEAN ecosystem at this time are exit considerations for ventures. Within the next two to three years, the region will need to show that it can provide more potential exits in a way that brings meaningful returns to entrepreneurs and investors.

According to Temasek’s report, there are currently around 7,000 start-ups in Southeast Asia, with 80 percent of them based in Singapore, Indonesia, and Vietnam. In 2016 leading VC firms such as Alibaba, Tencent Holdings, SoftBank, 500 Startups, and Golden Gate Ventures invested US$1.1 billion in Southeast Asia’s start-ups, spreading over 355 deals. With 88 percent of the cash going into Singapore and Indonesia and 65 percent of the sum going into five giant start-ups – Grab, PropertyGuru, Trikomsel, Qoo10, and iCarsClub. In Southeast Asia’s ride-hailing market, Grab has successfully raised US$2 billion from SoftBank and Didi Chuxing in July 2017. This investment is expected to create a more powerful rival to Uber, which has already struggled to build a base in the region. Similarly, Go-Jek, a bike and car on-demand platform in Indonesia that is seen widely as the market leader in the country, is competing with Grab by securing a new round of US$1.2 billion led by Tencent Holdings in May 2017. Understanding that the business environment in ASEAN is highly fragmented, Grab has established a clear leadership in the region based on its market position, superior technology, and truly local insight. In the digital economy, the transformation requires businesses like Grab and Go-Jek to fully understand multiple cultures and languages, localise their products, connect with local business contacts, and recruit a talented local team. 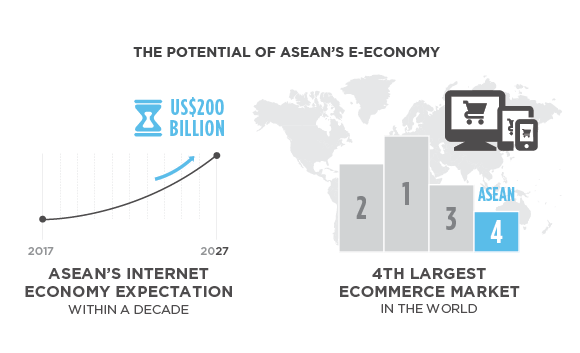 Funds like 500 Startups has been targeting the Vietnam-connected start-ups since 2016. As a part of the ASEAN community, Vietnam is a rapidly growing country with talented entrepreneurs and engineers. It is one of the world’s fastest growing economies since 1990 and has been Apple’s fastest growing market in the world. This is further strengthened by other developments, like the agreement on the Trans-Pacific Partnership (now in abeyance), inexpensive labor costs, and growing consumer spending. Notably, IDG Ventures, a USA early-stage Venture Capital firm, has been active in Vietnam since 2004. With US$100 million under management, the firm has invested in a diverse portfolio of 40 start-ups in areas like technology, media, and consumer services and products. One of the first investments of IDG Ventures Vietnam was VNG, raising a series A investment in 2005. From there, this company has built a platform stretching from music downloads to mobile games to its flagship chat app, Zalo which was valued at US$1 billion and secured US$100 million in revenue in 2016. Hence, VNG is an example of how the company specifically targets Vietnamese consumers and is touching on a large enough market to make it worthwhile for investors like IDG Ventures.

Overall, it is probably due to the sheer complexity and heterogeneity of Southeast Asia that Western companies would look to establish their foothold here. Start-ups in the region have offered VC firms their fundamental and strategic values in the markets they operate in so it is widely believed that by investing in talent and in business, both entrepreneurs and investors can yield successful cases in the ASEAN region.

Henry Nguyen serves as the Managing General Partner of IDG Ventures Vietnam, a private equity firm focused on technology, media, and telecom investments in Vietnam. He is the Master Franchisee for McDonald’s restaurants and the Chairman for Forbes Magazine in Vietnam. He is also the President of the Vietnam Basketball Federation (VBF) as well as the Vice Chairman and Owner of the Los Angeles Football Club (LAFC), the newest club in Major League Soccer (MLS).