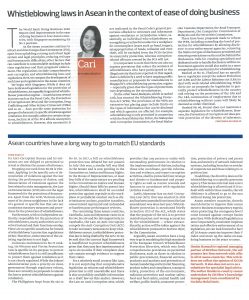 The World Bank Doing Business 2020 Report cited improvements in the ease of doing business in four ASEAN countries, with Singapore maintaining its No 2 position.

As the ASEAN countries continue to attract and drive foreign direct investment (FDI), apart from upholding a strong and robust legal system and legal principles, reducing red-tape and bureaucratic difficulties, other factors that can contribute to commendable rankings include clear regulations and their pragmatic enforcement. These regulations include comprehensive anti-corruption and whistleblowing laws and regulations. Here, we compare the development of such laws and regulations in the ASEAN countries.

We begin with Singapore. While it does not have dedicated legislation for the protection of whistleblowers, its arguably fragmented whistleblower protection regime – located across several statutes such as the Penal Code, the Prevention of Corruption Act (PCA) and the Corruption, Drug Trafficking and Other Serious Crimes Act (CDSA) and so on – does provide some protection for groups of informants in specific situations against retaliation. For example, subject to certain exceptions, Section 36 of the PCA affords anonymity to whistleblowers. However, this anonymity is not replicated in the Penal Code’s general protections afforded to witnesses and informants against retaliation or intimidation where, essentially, an individual who whistleblows on wrongdoing or unlawful conduct in a workplace for commonplace issues such as fraud, forgery, misappropriation of funds, collusion, and even theft, will be excluded from the PCA’s section 36 anonymity protections, whereas corruption-related offences covered by the PCA, will not.

It is important to note that there are also no express provisions that reduce the sentence of whistleblowers who have participated in the illegal activity they have reported. In this regard, there is definitely a need to have ongoing public consultations or proposals for amendments to Singapore’s whistleblowing protection regime – especially given that the types of protections vary depending on the circumstances.

On the other hand, Malaysia, which is ranked 12th, has enacted the Whistleblowing Protection Act (WPA). The provisions of the WPA are extensive but glaring gaps include limits on the types of information that can be disclosed, and which agencies are affected. For example, whistleblowing is only permitted in connection with the Royal Malaysian Police, the Malaysian Anti-Corruption Commission, the Royal Malaysian Customs Department, the Road Transport Department, the Companies Commission of Malaysia and the Securities Commission.

Ranked at No 21, Thailand has no specific law or regulation except the Labour Protection Act (LPA) and the Labour Relations Act (LRA) to deal with work-related whistleblowing. While there are no proposals for legislation to generally protect whistleblowers in the country and relying on the provisions of the LPA and the LRA, termination of employment due to whistleblowing without cause will likely be deemed as unfair dismissal.

Ranked No 66, Brunei does not maintain a separate legislation for whistleblowers. However, the Prevention of Corruption Act does provide protection of the identity of informers. Its Anti-Corruption Bureau and its witnesses are not obliged or permitted to reveal or disclose the names of their informers.

Dropping one rank from No 69 is Vietnam. Applying to the specific acts of denunciation of violations against the law during the performance of duties; and denunciation of violations against the law related to state management, the Law on Denunciation (LOD) sets out the legal framework for the protection of denouncers. Apart from the LOD, Vietnam joins most of its ASEAN neighbours in the lack of a general or specific law that sets out consistent statutory measures and procedures for the protection of whistleblowers.

Furthermore, with no independent authority responsible for the protection of whistleblowers, many authorities are involved instead and their functions overlap. There are no specific sanctions for breach of whistleblower’s protection regulations either. Therefore, enforcement of the existing regulations is not high.

Indonesia maintained its No 73 ranking. Indonesia’s Witness and Victim Protection Law is specific in its purpose to protect whistleblowers but it is still insufficient to protect them against retaliation as it is not clearly regulated. While the Jokowi administration puts a priority on clean government through regulatory reform, there are currently no proposals to amend the law to protect whistleblowers against retaliation.

The remaining three ASEAN countries, Cambodia, Laos and Myanmar came in at No 144, No 154 and No 165 respectively. In Cambodia, the Law on Anti-Corruption compels the Anti-Corruption Unit (ACU) to take necessary measures to keep whistleblowers secure. A whistleblower protection law is being drafted by the ACU. It can be said that the current legal framework is insufficient to protect whistleblowers given that they may face imprisonment of up to six months if their complaint does not contain enough evidence to support their claim.

For a relatively small country like Laos, it is not surprising that comprehensive legislation on witness and whistleblower protection is still unavailable and there is also no publicly available information on a draft law on this matter. However, the Law on Anti-Corruption 2012, which provides that any person or entity with outstanding performance in relation to the implementation of this law, including those who coordinate, provide information and evidence, and report corruption activities, shall be protected from revenge and threats to fundamental and property rights as well as receive rewards and honours in accordance with regulation (Articles 8 and 54).

Lastly, Myanmar has an Anti-Corruption Law (ACL) that was enacted in 2013 and has been amended four times (the last amendment was done in 2018). Whistleblower protection is mentioned briefly in Section 17(J) of the ACL, which states that the purpose of the ACL is to prevent misinformation and wrong accusation of the whistleblower – where extraordinarily, action will be taken against the whistleblower pursuant to Section 16(m) by the Commission.

Arguably, ASEAN countries have a long way to go in emulating the high standards of the European Union’s Whistleblower Protection Directive, which sets forth comprehensive provisions on permitted disclosures, such as those in relation to public procurement, financial services, products and markets and prevention of money laundering and terrorist financing, product safety and compliance, transport safety, protection of the environment, radiation protection and nuclear safety, food and feed safety, animal health and welfare, public health, consumer protection, protection of privacy and personal data, and security of network information systems, including breaches or avoidance of corporate tax and those relating to competition law.

In addition, the directive does not limit whistleblowing to a specific government agency. This means internal and external whistleblowing is allowed and if it is not dealt with within three months, the whistleblower is allowed to go to the media without losing protection.

ASEAN member countries, therefore, must do better to improve its commitment to business transparency especially when protecting the courageous few that would come forward against corrupt business practices. With dedicated legislation and more importantly, consistent implementation and effective enforcement of such legislation, we can look forward to having all 10 ASEAN countries improve their FDI index and move up the ranks on ease of doing business in the years to come.

Hanim Hamzah is Regional Managing Partner of ZICOlaw Network, the only premier law firm network with offices in all 10 ASEAN countries. The network comprises independent leading law firms with a full presence in 18 cities across Southeast Asia, a region of over 650 million people and 10 countries. This article represents the author’s opinion and does not necessarily reflect that of the ZICOlaw Network. It also does not serve as substitute for specialist legal advice.