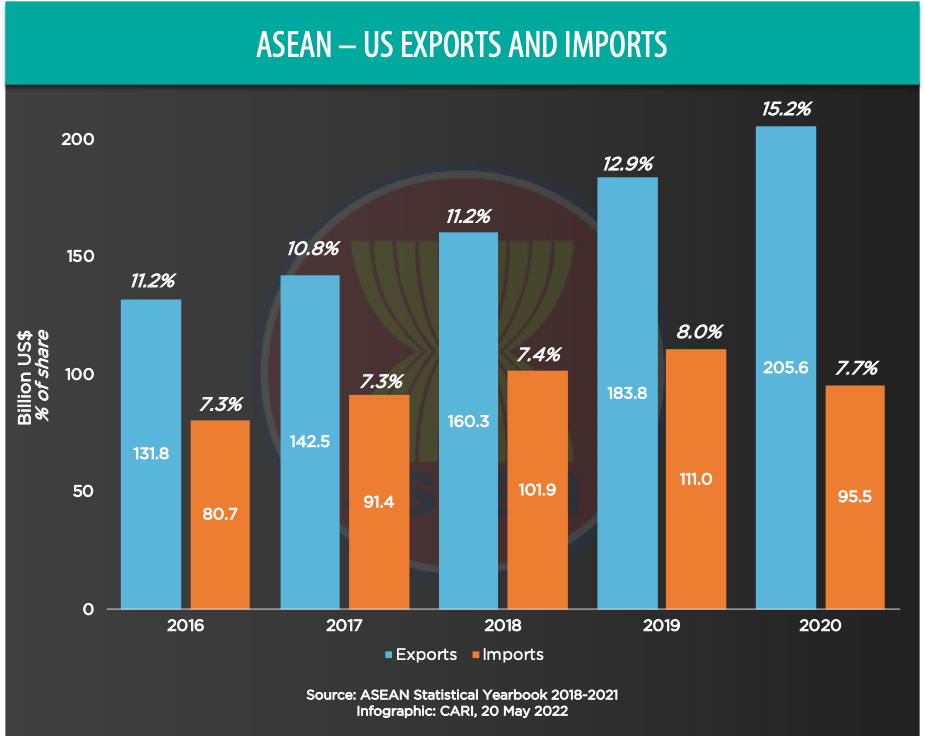 ASEAN, UNITED STATES
US makes US$150 million commitment to ASEAN leaders
(13 May 2022) ASEAN leaders were hosted by US President Joe Biden at the White House last week for a special two-day US-ASEAN summit, during which President Biden made a US$150 million pledge to help develop the region. Of the sum, US$40 million will go to infrastructure to help decarbonise the region’s power supply, US$60 million to maritime security, US$15 million to help with the early detection of COVID-19 and other respiratory pandemics, and the rest to help ASEAN countries develop digital economy and artificial intelligence laws. The US will also deploy a coast guard ship to help local fleets counter illegal fishing activity by Chinese fishermen in the region’s waters.

THE PHILIPPINES
Ferdinand Marcos Jr set to succeed President Rodrigo Duterte
(16 May 2022) Ferdinand “Bongbong” Marcos Jr is set to become President of the Philippines following a landslide win, with incumbent President Rodrigo Duterte’s daughter Sara Duterte set to become Vice President. While not much is known about his economic policies, Marcos Jr has said that he wishes to continue with President Duterte’s “Build, Build, Build” infrastructure program, channel part of the Internal Revenue Allocation to small and medium enterprises, not impose new taxes that would affect consumers who are still recovering from the pandemic, suspend the oil excise tax to tame the rise of fuel prices, and provide financial assistance to hog raisers to lower pork prices and increase supply.

INDONESIA
Indonesia relaxes mask mandate and border entry requirements
(17 May 2022) Indonesia has made the wearing of face masks outdoors optional and scrapped the COVID-19 test requirement for fully vaccinated travellers from overseas effective May 18. The country previously lifted the testing requirement for fully vaccinated domestic travellers in March. Indonesia also announced that mask-wearing is no longer needed in outdoor areas that are not crowded, though it is still required in crowded outdoor areas, indoors and on public transportation. Those who exhibit flu symptoms, have underlying health conditions or are elderly were also encouraged to continue wearing masks.

CAMBODIA
Cambodia announces US$150 million tourism recovery support
(17 May 2022) The Cambodian government has announced a US$150 million pandemic recovery co-financing scheme to address the lack of financing available for tourism-related businesses. Half of the loans will be disbursed through the state-run SME Bank, while the other half will be disbursed through commercial banks and microfinance institutions. The loans can go up to US$400,000 disbursed in either riel or US dollars, with a maximum interest rate of 6.5% per annum, loan terms of up to seven years, and a 12-month grace period. Over 20,000 tourism sector workers are still unable to return to pre-pandemic employment arrangements as of March 31, and 97% of tourism businesses reported cash flow problems.

THAILAND
APEC meeting to focus on free trade, food security and digitalisation
(13 May 2022) The Asia Pacific Economic Cooperation (APEC) Ministers Responsible for Trade Meeting held in Bangkok this week will focus on eight areas including the Free Trade Area of the Asia Pacific (FTAAP), preparations for future pandemics, the reopening of borders for travel, and support for rules-based multilateral trading. The meeting will be chaired by Thai commerce minister Jurin Laksanawisit and attended by members of 21 economic areas. Thailand hopes to play a role in helping the APEC transition to the FTAAP by 2040. If successful, the new free trade area will be the world’s biggest, representing 62% of the world’s GDP.

MALAYSIA, SINGAPORE
Johor-Singapore rail link to absorb at least 35% of causeway traffic
(18 May 2022) The Johor Bahru-Singapore Rapid Transit System (RTS) Link is projected to absorb at least 35% of road traffic between the checkpoints in Singapore and Johor Bahru as it will be able to transport 10,000 people per hour in each direction, according to MRT Corp, the developer of the Malaysian section of the project. MRT Corp is aiming for “five, five, five” when it comes to travel time: five minutes to clear immigration, five minutes of waiting time and travel, and five minutes to move out of the Woodlands North side. The US$2.35 billion project is scheduled to be completed by December 2026 with Singapore bearing 61% of the cost.

SINGAPORE, INDONESIA
Only two Asia Pacific markets are in positive territory so far this year
(18 May 2022) Singapore’s Straits Times Index and Indonesia’s Jakarta Composite have outperformed their peers across the region and are the only two indexes in the Asia Pacific that are “in positive territory” so far in 2022, according to CNBC. Analysts say that this could be due to factors such as the reopening of the region’s economies, markets in Indonesia and Malaysia benefiting from high commodity prices, and lower exposure to geopolitical risks since ASEAN equities have lower trade linkages to the rest of the world. China’s Shenzhen Component is currently in last place having plunged by over 24% since the start of the year.

JAPAN
Japan to allow limited foreign package tours as an experiment
(17 May 2022) Japan will start allowing small groups of tourists on package tours from Australia, Singapore, Thailand and the US to enter the country later this month as an experiment — the first time the country is opening up to foreign tourism since it closed its borders due to the pandemic. Each group can have a maximum of four people and they must have tour guides and fixed itineraries. A total of 50 tourists are expected to join the experiment and these participants will be issued special visas, not tourist visas. All participants must be triple-vaccinated. Japan currently allows up to 10,000 international arrivals per day though it is still closed to tourists.

NEW ZEALAND
New Zealand announces US$630 million in temporary stimulus(19 May 2022) The New Zealand government has allocated some US$630 million in its annual budget to help low and middle-income households cope with the rising cost of living. A large part of this will be a ~US$17 (NZ$27) per week direct cash payment to 2.1 million people earning less than ~US$44,440 (NZ$70,000) a year, starting on August 1 for three months. The government will also extend fuel tax reductions and half-price public transport for another two months. New Zealand’s inflation rate is presently at its highest in three decades at 6.9%.

NEW ZEALAND
New Zealand to speed up electric car adoption to cut emissions
(16 May 2022) New Zealand announced its first emissions reduction plan this week and said that it will allocate some US$1.84 billion (NZ$2.9 billion) from its new US$2.83 billion climate response fund over four years to fund a range of initiatives. This includes funds to invest in electric vehicle (EV) charging infrastructure and make EVs more accessible, especially to low and medium-income households. The government has also committed to investigating hydrogen as an alternative energy source, reducing landfill waste by increasing access to curbside food waste collection, banning new low and medium-temperature coal boilers, and planting more trees to boost carbon sequestration.