Focus: ASEAN Business Club Forum
Be it in China or in ASEAN, businesses can play an even bigger role in driving future growth 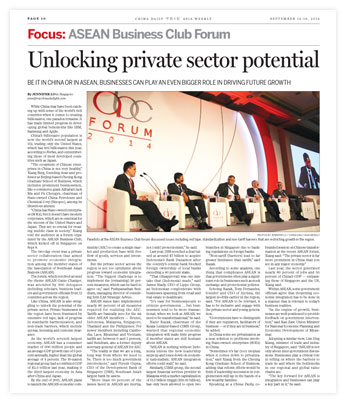 While China may have been catching up with some of the world’s rich countries when it comes to creating billionaires, one paradox remains: It has made limited progress in developing global behemoths like IBM, Samsung and Apple.

China’s billionaire population is now the world’s second largest at 152, trailing only the United States, which has 492 billionaires this year, according to Forbes, and outnumbering those of most developed countries such as Japan.

“China has State-owned enterprises (SOEs), but it doesn’t have modern corporates, which are so essential for the success of the United States and Japan. They are so crucial for creating middle class in society,” Xiang told the audience at a forum organized by the ASEAN Business Club, which kicked off in Singapore on Sept 8.

The two-day event was a private sector collaboration that aimed to promote economic integration among the member states of the Association of Southeast Asian Nations (ASEAN).

The forum, which revolved around the theme ASEAN Game Changer, was attended by 300 delegates including scholars, business leaders and government officials from 12 countries across the region.

Like China, ASEAN is also struggling to unlock the potential of the private sector. Private businesses in the region have been frustrated by extensive red tape, lack of progress in standards harmonization, and non-trade barriers, which include quotas, licensing and customs clearance.

As the world’s seventh largest economy, ASEAN has a consumer market of 600 million people and an average GDP growth rate of 6 percent annually, higher than the global average of 4 percent. The 10-nation regional group had a combined GDP of $2.3 trillion last year, making it the third largest economy in Asia after China and Japan.

By the end of 2015, ASEAN plans to launch the ASEAN economic community (AEC) to create a single market and production base with free flow of goods, services and investments.

But the private sector across the region is not too optimistic about progress toward economic integration. “The biggest challenge is to implement the (remaining) 20 percent measures, which can be hard to agree on,” said Pushpanathan Sundram, managing director of consulting firm EAS Strategic Advice.

ASEAN states have implemented nearly 80 percent of all measures required for realizing the AEC. Tariff s are basically zero for the six older ASEAN members — Brunei, Indonesia, Malaysia, Singapore, Thailand and the Philippines. For newer members including Cambodia, Laos, Myanmar and Vietnam, tariff s are between 0 and 5 percent, said Sundram, also a former deputy secretary-general of ASEAN for AEC.

“The reality is that we are a long, long way from where we need to be. There is too much government involvement,” said Piyush Gupta, CEO of the Development Bank of Singapore (DBS), Southeast Asia’s largest bank by assets.

“More than 50 percent of the issues faced in ASEAN are inertia, not (only) protectionism,” he said.

“That (disapproval) was one mistake that (Indonesia) made,” said James Riady, CEO of Lippo Group, an Indonesian conglomerate with businesses spanning from retail and real estate to healthcare.

“It’s easy for businesspeople to criticize governments … but businessmen tend to be more transactional; when we look at ASEAN, we need to be transformational,” he said.

“ASEAN is nothing without Indonesia unless the new leadership steps up and tones down on economic nationalism; ASEAN integration efforts could stall,” he said.

Similarly, CIMB group, the second largest financial services provider in Malaysia with a market capitalization of 61.5 billion ringgit ($19.39 billion), has only been allowed to open two branches in Singapore due to banking regulations on foreign banks.

According to some analysts, one thing that complicates ASEAN is that governments often play a significant role in businesses such as stock exchange and protectionist policies.

Echoing Razak, Tony Fernandes, founder and CEO of AirAsia, the largest no-frills carrier in the region, said: “For ASEAN to be relevant, it has to be inclusive and engage with the private sector and young generation.

“Governments have to distinguish if they are regulators, facilitators of business — or if they are in business,” he added.

In China some see privatization as a neat solution to problems involving State-owned enterprises (SOEs) in China.

“Sometimes it’s far (too) utopian when it comes down to privatization,” said Xiang from the Cheung Kong Graduate School of Business, adding that reform efforts would be futile if leadership succession in conglomerates still lay in the hands of a few wealthy families.

Speaking at a China Daily cobranded session on Chinese transformation at the recent ASEAN forum, Xiang said: “The private sector is far more prominent in China than you see in any major economy.”

Last year, the sector generated nearly 80 percent of jobs and 50 percent of China’s GDP — surpassing those of Singapore and the US, Xiang said.

Within ASEAN, some government officials agree that deepening economic integration has to be done in a manner that is relevant to today’s business realities.

“As the engine of growth, businesses are well-positioned to provide feedback on government intervention,” said Kan Zaw, Union Minister for National Economic Planning and Economic Development of Myanmar.

Adopting a similar view, Lim Hng Kiang, minister of trade and industry of Singapore, said: “ASEAN is not only about inter-government discussions. Businesses play a critical role in telling us where the barriers to trade lie and where the bottlenecks in our regional and global value chains are.

“The key forward for ASEAN is integration and businesses can play a key part in it,” he said.