Donald Trump’s surprising win of the US Presidential Election on 8 November 2016 has triggered mostly negative responses and reactions from across the globe. Tan Sri Dr. Munir Majid, Chairman of CARI, has pointed out1 the ironies that the US has exposed itself to, how Trump was able to voice out how the American people feel about their country and economy, and about the rest of the world. No matter how silly and derogatory his remarks have been, they seem to be what the Americans want to hear. President Obama may be a good leader for the US in the era of globalization, but for the hardcore nationalist Americans, he could be seen as not sufficiently prioritizing his own country in dealing with the rest of the world.

During his campaign, Trump attacked many current domestic and foreign US economic policies, labeling them not in the interest of the American people. What he was promising to supporters is departing from what the US has been doing and advocating domestically and to the global economy. Experts have attempted to analyse Trump’s economic campaign commitments, and how they may affect the US and global economies.

According to economists of Goldman Sachs2, there are four main economic policies that may shape US economy in 2017: (i) higher tariffs on imports, (ii) addressing illegal immigration (among others by deportation of illegal immigrants), (iii) increased government spending on infrastructure and defense, and (iv) tax cuts for businesses.

These policies are clear departure from the current policies taken by the Obama administration, and will have substantial consequences to the US and global economies. In the short run, especially propelled by the fiscal stimulus on infrastructure, the US growth may be higher. This may also increase demand for imports from other countries. However, given that tax rates are expected to be lower, such fiscal deficits cannot sustain and the effects may likely become negative. Higher tariffs will also limit products coming from overseas and depending on how local producers are able to meet the increasing demand, Americans will face higher prices. Deporting illegal immigrants, who have so far been willing to work under minimum wage, may impact corporate profits as labour costs will escalate, making it more difficult for American consumers in their consumptions. Tax cuts may be positive for corporate profits, who are probably expected to then expand their businesses and create more jobs for Americans.

The lack of clarity and coherence of these policies may result in volatility, rather bearish tendencies, in the US domestic market in the short-run, as suggested by the Economist3. If that is the case, prices of bonds, which offer fixed return, may drop as the risk of holding bonds becomes higher, diminishing its reputation as a risk-free asset. The impacts on monetary policy are also uncertain. Given the larger spending, and most likely larger borrowing to fund the spending, the most likely response from the Fed would be to impose tight monetary policy to curb inflation. However, the Fed’s independence will be tested, whether they can work together with the Treasury in maintaining macroeconomic stability and especially, in ensuring that price levels can be properly controlled.

​​Impacts on the Global Economy

The global economy is definitely not immune from the developments in the U.S., no matter how much it has recovered from the global financial crisis. Probably the most immediate affected two countries will be Mexico (and possibly some other Latin American countries) and China. Three possible scenarios4 will come from Trump’s proposed policies mentioned above:

1. Protectionism against free trade
Mexico may be directly hit, and the country has already experienced a plummeting peso since Trump started to emerge as the Republican candidate. This is because the Mexican economy is now more connected to the US (and Canada) since North American Free Trade Agreement (NAFTA) came into effect back in 1994. Trump’s promises to renegotiate the agreement, and to impose higher tariff on imports from Mexico, this will mean big trouble for Mexico, who will try its best to prevent any harmful renegotiation from taking place.

Imposing more barrier to imports from China, with the aim of getting back jobs to the US, may backfire since the US consumers are already used to cheap products from China (and from other emerging economies). Expecting jobs to return but not offsetting impacts from the rising prices due to higher wage rate in the US will not bring positive outcomes from this policy. In addition, since China (and Japan) is one of the biggest creditors to the US, going ahead with continuously blaming China for US economic and unemployment problems, and calling it “currency manipulator” may trigger retaliatory actions from the Chinese side, either by deliberately weakening the renminbi, selling its US assets, or speeding up its efforts to promote the renminbi as a global reserve currency.

There’s suggestion that a last possible move by China5 is a currency war which may take place when global demand slow down as a result of the increasing US protectionism. Such war may be difficult to stop since the current global financial governance have limited power to exercise their authority on the national level. Every country affected by the greater barriers imposed by the US may have to manipulate their currencies in order to win the increasingly harsh global competition.

2. Fiscal expansion on infrastructure
Again, spending more on infrastructure may stimulate the domestic economy and create jobs. If imposing the higher tariffs on imports is not implemented immediately, in the short term this will raise more imports especially from emerging countries and if this continues for some time, the economy may overheat.

The lower tax rates, coupled with greater spending, will result in larger fiscal deficit which will in the longer run put pressure on the US dollar. To address the overheating economy and, later, weakening dollar, the Fed may be forced to raise interest rates to curb the inflationary pressures and strengthen the currency.

3. Strong dollar resulting from fiscal expansion
Raising interest rates will cause the dollar to strengthen, and this could be good and bad for emerging economies. On one hand, it may benefit exports from those countries since the goods are cheaper of US consumers, but on the other hand, emerging economies with large debt denominated in US dollar will have difficulty servicing the debt. Countries borrowing the dollar but earning less from exports, and therefore less US dollar, will be the ones suffering most.
At this point, immediately after the election, the value of the US dollar has already gone up, perhaps not so much of greater confidence and market sentiment on the Trump presidency, but more on the pessimistic predictions on how it may affect the rest of the world. What is really happening is not the strengthening of the US dollar, but the weakening of the other currencies.

It remains to be seen how the US under Trump will cause any problem in ASEAN, but for sure ASEAN is not immune to any global impacts. There are three possible ways on how the Trump administration may affect the ASEAN economies and economic community development: (i) direct impacts from the protectionism policy, (ii) risk from foreign debt denominated in US dollar, and (iii) possible renegotiation of the Trans Pacific Partnership (TPP).

1. Higher tariffs on imports from ASEAN
As of end of 2015, ASEAN’s total trade with the US is USD 212 billion, making the US the fourth largest trading partner of ASEAN (after ASEAN, China and Japan). Trumps proposal to impose barriers to trade with the rest of the world will affect ASEAN, most likely quite significantly given the size. If Trump is successful in maintaining this policy, ASEAN may have to think about fostering closer cooperation with other countries or economic regions, perhaps by speeding up its FTA negotiations with its dialogue partners and expediting the conclusion of the Regional Comprehensive Economic Partnership (RCEP) negotiations.

In terms of individual ASEAN-5 countries, the Philippines is the most vulnerable given that it has the largest percentage of exports to the US over it total exports6 (figure 1), which of the Philippines, the figure is over 15 percent based on a 12-month moving average. Thailand and Indonesia are next with figures within the range of 10 to 12 percent, while the figures for Malaysia and Singapore are just below 10 percent. 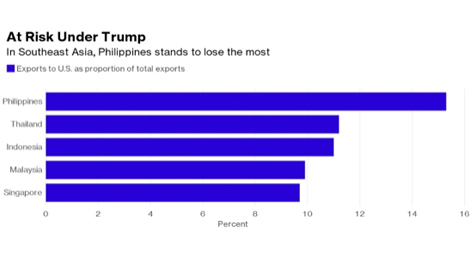 2. ASEAN’s foreign debt in US dollar
Foreign debt in ASEAN remains a big challenge to address. If not well managed, it may disrupt the economic stability the region has enjoyed thus far. The ASEAN crisis in 1997/98 should provide an important lesson on how currency and maturity mismatches from foreign debt ruined the so-called Asian Miracle. ASEAN governments need to avoid committing the original sin7, which refers to problems caused by abusing the ability to borrow in foreign currency.

During the first quarter of this year, ASEAN increased its foreign borrowing by USD 10 billion from sales of USD denominated bonds8. If the Fed decides to raise interest rates, and therefore strengthening the US dollar, countries like Indonesia, who alone borrowed USD 4 billion, will be in a vulnerable state. Figure 2 shows the progress of ASEAN’s foreign debt during the past 10 years. Note that from 2013-2015, the trend of ASEAN’s foreign debt was upward. 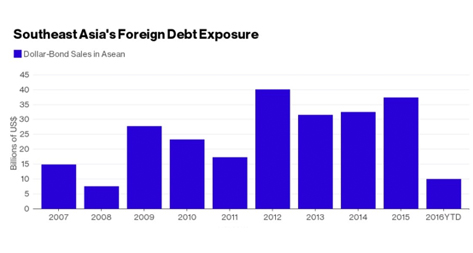 3. Renegotiation of the TPP
In the debate of TPP vs RCEP, we cannot help but realize that this is the US vs China in their effort to exert their economic influence in the Asia Pacific region. The RCEP is an effort by ASEAN and its main dialogue (and economic) partners to strengthen and harmonize the existing FTAs. Consequently, all ten member states of ASEAN are participating at the RCEP. China, together with Japan, are the strongest economies that drive the RCEP negotiations. On the other hand, TPP is driven by the US as a more ambitious attempt to create a regional economic cooperation with higher standards than the RCEP, which may be very challenging since China is excluded. For any regional economic collaboration in Asia Pacific to be larger and to make significant progress, China, as not only the region’s, but also the world’s largest manufacturer, has to be involved.

Exclusion of China, and Trump’s intention to renegotiate the TPP, may result in RCEP progressing better than the TPP. RCEP negotiations have been quite challenging, taking into account each member country’s readiness in moving ahead and ASEAN’s insistence on the ASEAN Centrality principle. Nonetheless, it builds upon the existing FTAs between ASEAN and its partners, so it’s more likely to be more robust. In addition, RCEP also involves both China and Japan, and the stronger ties between the two can only mean positive future for RCEP.

It remains to be seen how exactly the Donald Trump presidency will affect the global economy. If he goes ahead with everything he promised during his campaigns, then the world may expect a slower global growth aggravated by his intention to pull the US back from its current global involvements with the purpose of “making America great again.”

Nonetheless, there may be forces, either internal or external, that will pressure Trump to be more realistic with how the global economy has been progressing thus far, and to make him think of the repercussions if he really implements all his promises. In that case, we can expect the US economic policies will not divert too much from what they currently are.

For ASEAN, the possible weakening of the TPP may be positive for the conclusion of the RCEP, and ASEAN should continue to expedite the ongoing process. It is also important that ASEAN closely monitor what is happening in the US and continues to strengthen its economic fundamentals and be ready with the possibility of lower exports to the US. RCEP may be the answer to this as it will open new channels for ASEAN trade.