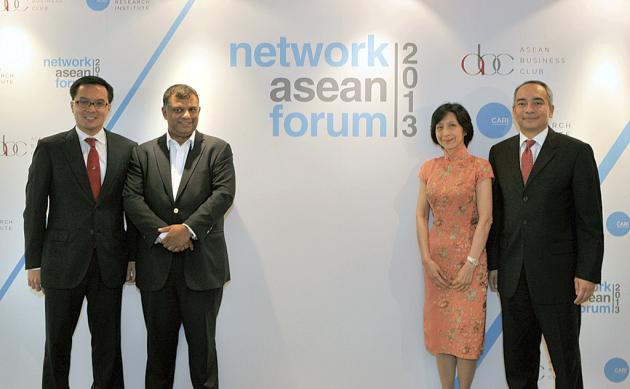 Key business leaders from across Asean were to gather yesterday for the inaugural Network Asean Forum to brainstorm solutions to some of the issues obstructing the creation of an integrated Asean Economic Community (AEC). The one-day NAF was held at the Shangri-La Singapore Hotel.

NAF chairman Patrick Walujo, who is also a council member of the ASEAN Business Club (ABC) and the managing director of Northstar Pacific Partners, stressed the timeliness of the forum in enabling business leaders to discuss how to manage the targets set out by the AEC agenda.

“Despite Asean’s vast potential as a global trade and commercial centre, the private sector remains a largely fragmented market, as member nations are at various levels of development. In addition, the recent crisis experienced by members of the euro zone is a harsh reminder that the formation of economic blocs may carry unexpected pitfalls,” he said.

“It is for this reason that the formation of the AEC must be done carefully and in a collaborative manner involving representatives from all ASEAN members to ensure each party is fairly represented.”

NAF convenor Nazir Razak, group chief executive of CIMB Group, added that there was insufficient critical-mass support for ASEAN economic integration and although there had been improvement, much more needed to be done in these areas.

“Individually, each of the countries within ASEAN – with the exception of Indonesia – represents a relatively small market. We want to compete with the likes of China and India, and with the US and Europe, which must recover at some point. To do so, we must build scale but not for scale’s sake alone. We must scale up in a sustainable and inclusive manner, and that means creating a collaborative regional bloc,” he said.

Organised by the ABC and the CIMB ASEAN Research Institute, a public organisation committed to realising the AEC, the NAF was premised on three goals: to identify bottlenecks and barriers to free trade, to construct solutions to industry-specific obstacles, and to bring together regional business leaders to shape ASEAN economic integration.

“Although we come from different industries and separate countries with our individual concerns and interests, it is to our mutual benefit that ASEAN succeeds,” said Chew Gek Khim, NAF convenor and executive chairman of Straits Trading Company, said before yesterday’s forum got under way. “The outcome of the six roundtable sessions … should be reflected in policy recommendations which will be submitted to the governments of the 10 ASEAN member countries.”

Central to the forum are the sector-based “Lifting the Barriers” roundtable sessions. These were designed to enable regional business leaders to discuss and construct solutions to existing and potential barriers to freer trade in six key sectors: aviation; connectivity; infrastructure, power and utilities; capital markets; financial services; and healthcare. The research partners for the sessions were National University of Singapore, Bain & Company, McKinsey & Co, Oliver Wyman, Boston Consulting Group and Accenture respectively.

“The outcome of these roundtable discussions will be reflected in policy recommendations, which will be published and presented to the policy-makers,” Walujo said.

“With [fewer] than a fifth of ASEAN businesses having made any plans for AEC 2015, it is abundantly clear that anyone in a position to make policy must make awareness a key consideration.”

The NAF also featured plenary sessions on topics such as the challenges of ASEAN as a single market, drivers for growth, and investing in Asean’s future.