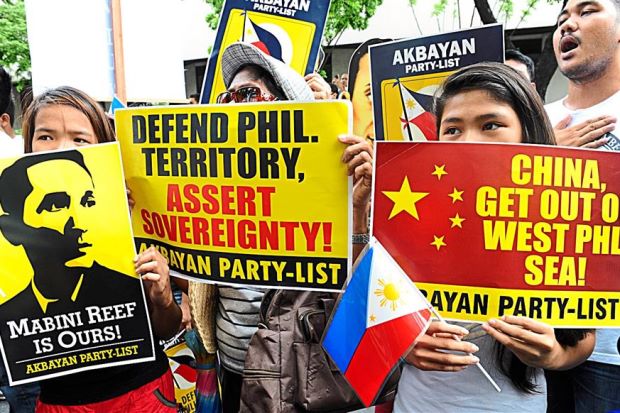 Protesters display placards during a rally in Manila, the Philippines recently against China’s claim to areas of the South China Sea. – AFP

ONE of the black messages of the downing of MH17 is that seemingly distant disputes can cause horror and harm even to those not involved in them.

International terrorism in recent times has become an agent of unexpected and gruesome death, but it was always expected conventional conflict was more definable and better contained, by territory and by international norms and conventions.

Civil wars were thought to be even more limited, but this has to be qualified by their geopolitical significance, the parties behind the protagonists and the weapons made available to them. Clearly the conflict in the Ukraine is a civil war in fact and should be so recognised in law, bringing to it the protection however ineffectively of legal constraints and expected conduct.

Where states commit acts of terror and genocide, as in the Israeli attack on Gaza, what can be observed are clear violations of international law, but there is nothing that can stop such a powerful regional power especially when supported by the most powerful nation on earth. Israel treats the court of world opinion with utter contempt and even regard genocide of Palestinians as justifiable, as Hitler did the Jews.

All these situations, even when we think we are only observing far away conflict and the violation of laws and humanitarian principles, affect us – as we now know only too well. Actually there were some people who speculated that the downing of MH17 was a Mossad conspiracy to distract attention from its attack on Gaza but Israel, even if it would not be beyond it to conspire to do such a thing, does not need or care for such distraction.

With respect to violent Israeli state terror too, our anguish over the slaughter of close to 2,000 Palestinian sitting ducks of whom over two-thirds are civilians in a period of less than a month, may not necessarily stop there. The allegation that Malaysia trains Hamas fighters may not be an innocent mistake. We must take note the Israeli arm reaches further than the rightful arm of the law.

The upshot is we must be alert to international situations. They are not just affairs of state. They affect individuals, families and corporations. When MH17 was shot down, there was an instinct to blame Malaysia Airlines (MAS) at first, not to appreciate the situation in Ukraine.

As a former chairman of MAS I take strong exception to this tendency. It was alleged the airline was following a flight path others avoided, that it was flying below 30,000ft and that it had diverted from its flight path. It was not helped by some assertion from our dear neighbour Singapore that Singapore Airlines (SIA) did not follow the route MH17 took.

All this unconscionable bunkum was latterly exposed. Everybody followed that route, anything above 30,000ft, including SIA. Indeed, as we subsequently were informed, an SQ flight from Copenhagen was just 90km behind on the same path. The flight path was approved by the European civil aviation authority Eurocontrol. It was only after MH17 was shot down that all flights over the Ukraine were stopped.

What this shows (apart from the tendency to knock MAS) is how not even the Europeans were prescient in a theatre of conflict in their very own region. All this has to improve. Even if it is now all 20/20 hindsight, it is all the more necessary to learn lessons, be more alert to situations in areas of conflict, real and potential.

In this regard, there is a situation in our region which could give rise to undesirable incidents, accidental or otherwise – the South China Sea disputes.

For as long as the situation remains volatile – and hostile as between China and the Philippines, and China and Vietnam – there is every possibility of a shooting in the air or at sea. If China were to declare a ADIZ (Air Defence Identification Zone) in the vast expanse (90% ) of the South China Sea within its nine-dash line claim, another KAL 007 (Korean Airlines shot down by Soviet fighter aircraft in 1983) or IR 655 (Iran Air hit in 1988 by US warship Vincennes) and, now MH17, could happen.

If we do not want MH17 and the lives lost to become just another statistic in history, apart from bringing the perpetrators to justice, we must also be more conscious of possible repeat events. Not just in terms of avoidance but also through preemption.

Over the South China Sea we have a specific situation which, particularly since 2009, carries a great political risk to safety of life at sea and above it, not to mention the great setback to the economies of the region should conflict break out.

It is incumbent upon the peoples and governments of the region therefore to be committed to finding a modus vivendi over the South China Sea, even if settlement of the disputes might be difficult to achieve.

It has been 12 years since the declaration on conduct of parties was signed between China and Asean, but the code of conduct that was supposed to emanate from it has still not been negotiated and signed.