RCEP a feather in ASEAN’s cap 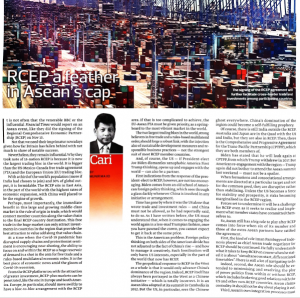 It is not often that the venerable BBC or the influential Financial Times would report on an ASEAN event, like they did the signing of the Regional Comprehensive Economic Partnership (RCEP) on 15th November.

Not that we need their imprimatur nowadays given how far Britain has fallen back with not much to show of notable success.

Nevertheless, they remain influential. Why they took note of 15-nation RCEP is because it is now the largest trading bloc in the world. It is bigger than the United States-Mexico-Canada free trade agreement (FTA) and the European Union (EU) trading bloc.

With a third of the world’s population (more if India had chosen to join) and 30% of global output, it is formidable. The RCEP sits in East Asia, in the part of the world with the highest rates of economic expansion, with China well placed to be the engine of growth.

Perhaps, most importantly, the immediate benefit in this large and growing middle-class market is the rules of origin in trade, which would connect member countries along the value chain to the final RCEP country destination. This free trade in the huge market can only attract investments in countries in the region that provide the best attraction to value add along that value chain.

At a time when the COVID-19 pandemic had disrupted supply chains and protectionist sentiment is encouraging near-shoring, the ability to focus on and within the RCEP as a huge reservoir of demand, is a shot in the arm for free trade and a rules-based multilateral economic order. It is the best piece of economic news in the gloom of COVID-19 recession.

From the RCEP platform too, with the attraction of greater investment, RCEP-plus markets can be penetrated, like in Europe and South America. Europe, in particular, should move swiftly to have a bloc-to-bloc arrangement with the RCEP area. If that is too complicated to achieve, the EU-ASEAN FTA must be given priority, as a springboard to the most vibrant market in the world.

The two largest trading blocs in the world, strong believers in free trade and a rules-based multilateral order, should forge a robust link, with the injection also of sustainable development measures and responsible business practices – not the strongest suit of most RCEP member countries.

And, of course, the US – if President-elect Biden dismantles xenophobic America First Trump thinking, opens up and engages with the world – can also be a partner.

First indications from the response of the President-elect to RCEP, however, are not too encouraging. Biden comes from an old school of American foreign policy thinking, which sees through the glass darkly whenever China is involved in any initiative or arrangement.

Time has gone by when it is the US alone that wrote trade and investment rules – and China must not be allowed, as he had reportedly said, to do so. As I have written before, US must understand, when it comes to engaging the world again in a less-mad Trumpian fashion, once you have pawned the crown you cannot expect to get it back at the same price.

This is the American problem. Foreign policy thinking on both sides of the American divide has not adjusted to the fact of China’s rise – and how to manage it creatively. Such fossilisation will only harm US interests, especially in the part of the world that now has RCEP.

The geopolitical response to RCEP in the West as a whole is that it would only advance China’s dominance of the region. Indeed, RCEP itself has always been portrayed in the West as a Chinese initiative – which is totally incorrect. It is an ASEAN idea adopted at its summit in Cambodia in 2012. But the US, in particular, sees the Chinese ghost everywhere. China’s domination of the region could become a self-fulfilling prophecy.

Of course, there is still India outside the RCEP. Australia and Japan in the Quad with US and India, but they are also in RCEP. Then, there is the Comprehensice and Progressive Agreement for Trans-Pacific Partnership (CPTPP), which they are both members of.

Biden has stated he would look again at CPTPP, from which Trump withdrew in 2017. But American re-engagement with the region – Trump again did not bother to attend the ASEAN summits last weekend – must not be a spoiler.

When formations and consociational arrangements are directed at a particular target and not for the common good, they are disruptive rather than stabilising. Unless the US becomes a force for stability and prosperity, it risks becoming marginalised in the RCEP region.

Forces set to undermine it will be a challenge for RCEP even as it seeks to realise and implement what member states have committed themselves to.

So, ASEAN still has a big role to play after RCEP comes into force when six of their number and three of the extra-ASEAN partners have ratified the agreement.

First, the kind of role Iman Pambagyo of Indonesia played as chief ASEAN trade negotiator for RCEP, should be continued. He fully understands what it takes to keep RCEP on course when he stated it is about “simultaneous start, differentiated timetables.” There is still a lot of navigating to do.

Indeed, second, the ASEAN role should be extended to minimising and resolving the play of power politics from within or without RCEP which includes brokering good relations with the US and other non-RCEP countries. ASEAN claims centrality. It should not be shy about playing it out.

Third, ASEAN’s own integration processes must not be neglected. In the association with the higher-level-of-development RCEP countries, for instance, e-customs trade facilitation should be introduced region-wide, and not with those countries alone.

The common rules of origin will allow companies to ship products between countries with a single certificate of origin to lower cost and, as earlier noted, to incentivize supply chains. The boost in trade across the bloc to be achieved by lowering tariffs, standardising customers rules and procedures and widening market access – should be taken advantage of across ASEAN as well.

The ASEAN Economic Community, on the other hand, is still unfinished business. Many proposals have been made by the private sector time and time again on its many shortcomings, not least the increase in non-tariff barriers and measures. There is similar commitment to such removal in RCEP. Hopefully it will be a fillip to an ASEAN clean-up as well.

Fourth, at the summit last weekend, a memorandum of understanding was signed by ASEAN leaders on the implementation of non-tariff measures (NTMs) on essential goods. It falls short of what the private sector has been pushing for: It is not binding. The list of essential goods also does not cover what had been proposed. There is too much room as well allowing for NTM introduction in “exceptional circumstances.” Nevertheless it is a start – and hopefully not just for the duration of the COVID-19 pandemic.

Fifth, ASEAN must not take its eye off an effective response to the pandemic, both in the ASEAN and RCEP context. Indeed, it should drive the sharing and pooling of the COVID-19 vaccine from whatever source – one of the many proposals contained in the private sector’s “A Pathway towards Recovery and Hope for ASEAN” (Pathway225) – recognised in the chairman’s statement at the end of last weekend’s ASEAN summit.

The summit adopted the secretariat’s ASEAN Comprehensive Recovery Framework (ACRF), which is a good document that needs the substance offered in Pathway225. The business councils stand ready to work with ASEAN officialdom on this, whether through the Special Business Advisory Board (SBAB) or the working group that had put together Pathway225.

ASEAN must recover its strength, moving out of the pandemic. Now with the RCEP, to be able to take full advantage of the promise of the economic bloc.

Finally, it must also not be forgotten by ASEAN that all the other members of RCEP are nation states which can make quick and focused decisions. If ASEAN is not to break up by itself making exclusively state-based decisions within the RCEP framework, it must enhance the regional grouping’s decision-making process.

Here, the ASEAN High Level Special Commission (AHLSC) proposed in Pathway225, designed for faster decision-making to recover from the COVID-19 pandemic, will also be useful to take united positions in RCEP. Whichever way you look at it there is no avoidance of improving ASEAN decision-making procedures.

Otherwise, there is the very real danger, if not quite of disintegrating, of ASEAN losing steam in its own integration process, as member states cast individual eyes on immediate and new attractions of the RCEP. Distraction has been a serious problem in ASEAN economic history.

So, well done ASEAN. The world has looked up and taken notice of the RCEP. But there is much work to be done, starting with its ratification, to give substance to its great promise. Thought must also be given to make ASEAN work together effectively within the RCEP – and not fall into separate silos.