Next Governor of Jakarta: Incumbent Pair or Prabowo’s Men?

The first round of voting for the Jakarta gubernatorial election took place on Wednesday, 15 February 2017. The incumbent candidate, Basuki Tjahaja Purnama, better known as Ahok, together with his running mate, Djarot Saiful Hidayat, was leading the quick count, winning more than 42 percent of the total votes. Governor and deputy governor candidates from Prabowo Subianto’s party (Gerindra), Anies Baswedan and Sandiaga Uno, followed closely with 39-40 percent of the total votes. Unfortunately for Agus Yudhoyono and Sylviana Murni, who represent former president SBY’s Democrat Party, they only managed to secure around 16-18 percent of the total votes.

The quick count is based on preliminary calculations by three leading survey institutes: LSI, Polmark Indonesia and SMRC. Official results will only be available in early March. 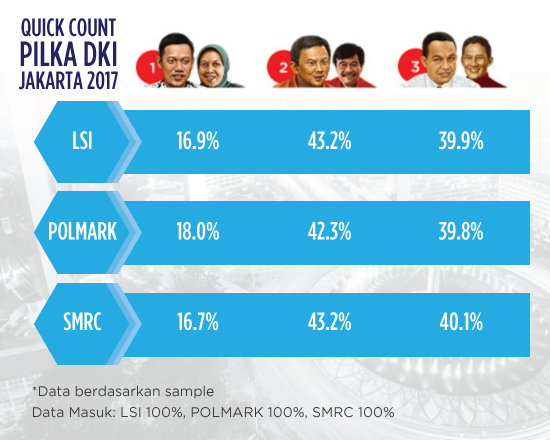 Despite the blasphemy case that Ahok has had to deal with during the last couple of months, it appears that the Jakarta residents (and therefore, voters) still believe that he is still the best person to lead the development of the capital city for the next period of five years. It began when in his campaign he encouraged Jakarta residents to rationally make the choice and not be driven by a verse from the Quran in doing so. Immediately the Muslim radicals of the Islamic defenders front (FPI) accused him of offending Islam. They managed to organise three rallies in the heart of Jakarta, aiming at the imprisonment of Ahok. While no verdict has been reached yet, it did have some effect on Ahok’s slightly lower popularity, with some voters swinging to the other candidates, but given the significant and real changes that he has brought to Jakarta, Ahok has remained a favourite choice in the race.

Anies, the former Minister of Education who was sacked by President Joko Widodo (Jokowi) from his cabinet last year, has managed to challenge Ahok in the second round1. Anies has been considered the best candidate that represents the Muslim majority, and therefore the better person to challenge Ahok, compared to Agus. In terms of capability, he is also seen as more mature and experienced. His strong educational background and more realistic plans for Jakarta (again, compared to Agus’ strategies) seemed to have won many votes. His only problem is perhaps the fact that Ahok has actually brought about many positive changes to Jakarta, and therefore Anies has been struggling to find development strategies for Jakarta that are both realistic and original, which has proven to be quite difficult given Ahok’s popularity.

Having “Yudhoyono” as Agus’ last name has been both a blessing and curse for him. It is a blessing because his father still has a strong position in Indonesian politics. He also still controls the Democrat Party, one of the largest political power in Indonesia. Agus’ rise to be a gubernatorial candidate would not have been possible without SBY’s massive influence, and Agus’ reputation and popularity is very much a function of SBY’s reputation and popularity. Given his very young age and lack of political experience, not many voters seem to have faith in him to run the big city of Jakarta.

The 2017 election has been marred by two political issues that may have heavily affected the outcome of the first round. The first one has to be the blasphemy case faced by Ahok. Several court hearings have taken place but there will be more to gather the facts and particularly to hear opinions and views of some Quran experts. This case may be prolonged and there has been no sign of where the verdict will be directed. The Muslim radicals have continued with their demand for Ahok to be punished. However, it is alleged by many, and Ahok himself, that the case has been severely politicised and driven by powers behind the other candidates.

The next one is the long running feud between SBY and Jokowi, which has not gotten any better lately, with SBY accusing the current government of discrediting him for legal issues that took place during his presidency. The latest blow is the accusation made by Antasari Azhar, former head of the corruption eradication commission (KPK), that SBY was behind his imprisonment for a murder that he claimed he did not commit. Just a day before the election day, Antasari called out SBY to come forward and explain the truth about that case. While SBY strongly denies his involvement, it may have resulted in people losing faith, affecting his son’s chances to be the next governor of Jakarta.

From the point of view of how people perceive the three candidates, the three debates involving the three running pairs have given voters some idea on how they intend to run Jakarta if they win the election. Ahok and Djarot, as expected, have relied on the real work that they have done as the incumbent governor and deputy governor. Anies and Agus seemed to be struggling to come up with original proposals that would be beneficial for Jakarta, and as a result, they have made unrealistic promises that are not likely to be met should one of them win the election. The road ahead remains challenging for Anies in trying to convince the Jakarta people that he has the capability to exceed Ahok’s achievements.

The fact that Anies managed to trail Ahok by a small margin to force a second round election is quite surprising. This may be because there have been many Muslims, moderate and educated, who are quite disappointed with Ahok. These are not the radicals but those who believe that there is an element of blasphemy in Ahok’s controversial speech. They are the swing voters who went for Anies instead of Agus. Overall, Anies is perceived to better represent the Muslim community and is more experience in the civilian government, compared to Agus whose career has only been in the military.

Nonetheless, Ahok is still the leading candidate, as expected. The moderate Muslims may be divided into those who were disappointed with Ahok, and those that still prioritise Jakarta’s development as the most significant factor in their decision. These are people who have benefited from Ahok’s programs and reforms thus far, and although they are Muslims, they don’t think too much of the blasphemy, especially since Ahok has publicly apologised for citing the Quran verse. This group did not participate in the rallies, did not support but did not condemn it either publicly. They preferred to wait and see the developments, but at the election day yesterday, they made up their mind, and as a result, Ahok became the leading candidate. This segment could be considered the “silent majority” who ended up deciding the final outcome of the election.

The voting has taken place and the results are almost final, Agus has conceded defeat and congratulated the other two candidates who will continue to fight in the second round. It remains to be seen at this point who will prevail in the second round. It will depend on how Ahok’s trial progresses, and how well Anies can convince the people of Jakarta that his ideas are satisfactory. It will also crucially depend on whom Agus’ voters will decide on this time, whether they will emphasize that the governor must be a Muslim, or whether they can accept that Ahok’s speech was not intended to discredit Islam. Anies may win the hearts of moderate to radical Muslims, but Ahok could convince them that his reforms and programs have been proven to be what Jakarta needs and therefore it is important that he continue to lead Jakarta.

1 The current election regulation provides that a second round is mandatory if the leading candidate is not able to secure at least 50% of the total votes. Given that Ahok only managed to win around 40% in the first round, the top two candidates will again compete in the next round.