Loong on China: Chinese investment – Behind those big sexy numbers 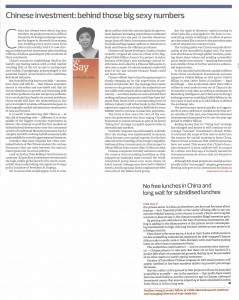 China has always been about big sexy numbers. Its people account for a fifth of humanity. Its foreign exchange reserves are the largest in the world. Its economy was doubling every seven years from 1980 until recently. And it is now driving an infrastructure investment plan involving trillions of dollars spanning 60-plus countries in three continents.

China’s success in establishing itself as the world’s top trading nation with a retail market rivaling that of the United States in size is undisputed. And widely if grudgingly acknowledged is the potential impact (if successful) of its ambitious Belt-Road initiative.

But it would be a big leap to conclude – as many have done and still do – that China’s economic ascent is relentless and inevitable and that its recent slowdown in growth and mounting debt and other problems are but temporary setbacks. Or to conclude that despite its current problems, China would still have the wherewithal to live up to its implicit promise of financial largesse to fund urgently needed infrastructure investments in Asia and beyond.

It is worth remembering that China is – at the risk of sounding trite – different. It is in the middle of the biggest economic experiment in history: the attempt to graft the free markets of industrialized democracies onto the command system of traditional Marxist economies. Such a complex and still evolving hybrid economy holds major pitfalls for even the most seasoned investors.

Consider that most singular but often overlooked feature of the Chinese system: the curious disconnect that can exist between the nation’s stated goals and its actual policies.

Look no further than Beijing’s recent moves to constrain Chinese direct investment overseas amid the high-profile global launch of its much-vaunted Belt-Road undertaking, the signature foreign policy initiative of President Xi Jinping.
Yet in moves that would appear to be in complete conflict with this national goal, the government has been increasing restrictions on outbound investment over the past 18 months. Measures range from off-limits investment sectors to new firewalls curbing capital outflows to restraints on bank remittances for offshore purchases.
Chinese real estate developer Country Garden recently stopped all sales in China of its flagship US$40 billion Forest City project in Johor, Malaysia because of Beijing’s new exchange control restrictions. And a deal by a Chinese billionaire to take over a major US entertainment studio fell apart at the last minute because funds could not leave China.

China’s official line is that the government is simply stepping up its risk supervision of outbound investment. But the message that comes across on the ground is that the authorities are not wildly enthusiastic about capital leaving the country – not when banks are now restricted from making outbound payments until they have balanced their books with a corresponding level of inflows. Industry talk is that banks in the Chinese capital are required to bring in Rmb100 for every Rmb80 used in overseas transaction payments.

The irony is that since the turn of the century the government has been urging Chinese businesses to invest overseas as part of its famed “Going Out” strategy to exploit opportunities in international markets.

Domestic response was enthusiastic. A decade after the strategy was implemented in earnest, China became a net capital exporter for the first time since the founding of the People’s Republic. Outbound direct investments in 2014 jumped to US$123 billion from a mere US$5.5 billion in 2004.

But the sight of domestic capital moving in what looks like a stampede for the doors is concentrating minds in Beijing’s corridors of power on what seems like a return to the past when state control reigned over market forces.

The turning point was China’s surprise devaluation of the renminbi in August 2015. The move had sent shockwaves through global markets, pushing down share values and sending commodity prices further into reverse – sparking fears inside and outside China of further and more substantial depreciation.

In the months that followed, capital outflows from China accelerated. Investment overseas jumped to US$146 billion in 2015 and to US$170 billion in 2016. Other forms of outflows – legal and illegal – also accelerated. More than US$1.2 trillion in total made its way out of China in the 18 months to end-2016, according to estimates by Bloomberg Intelligence. And China saw its foreign exchange reserves tumbling US$800 billion in the two years to end-2016 as it sold dollars to defend the exchange rate.

The government moved quickly and aggressively to stem outflows. It worked. In the first seven months of this year, non-financial outbound investments plummeted 44.3 percent over the year-ago period to US$57.2 billion.

Beijing denies that its “Going Out” strategy has changed and insists it will continue to encourage “rational” investments abroad. While it is beyond the scope of this note to delve into the reasons for capital wanting to leave China, there is broad consensus that outflow pressures have not eased. This means that China’s draconian measures to stem outflows will be around for a while. Just days ago, it formally named the overseas investment sectors that are banned or restricted.

Although Belt-Road projects are exempt and are actually in the “encouraged’ category, government blessing only goes so far. Investment decisions in the private sector in China as elsewhere are first and foremost about returns – be it financial profit or the vanity of being able to say you own the Waldorf Astoria or the chance to evade China’s strict capital controls or, dare we say it, the chance to pocket illegal monetary gain.

By putting new obstacles in the way of overseas investments, Beijing is adding to the disincentives of the private sector contemplating involvement in high-risk long-horizon infrastructure projects in a foreign country.

Then there is the state sector. A look at their books will show there are few compelling commercial arguments for debt-strapped Chinese SOEs to take on such costs or risks. Similarly with state banks making loans on other than a commercial basis.

The authorities could instruct – and on occasions have instructed – Chinese players to take part. But there are no free lunches. If a project falls short on commercial grounds, Beijing must be persuaded of its other merits to justify special treatment.

But reality on the ground is that projects will not be launched as quickly or as easily – nor in the numbers – that media hype would have the world believe. And the current ice age in Chinese outbound investment means that anyone expecting at least subsidized lunches from China is in for a long wait.

One thought on “Loong on China: Chinese investment – Behind those big sexy numbers”