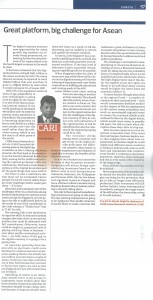 The Digital Economy presents new opportunities for Asean growth. Big numbers are already being pronounced which enhance further the attractiveness of the region slated to be the fourth largest economy in the world by 2050.

It has been estimated the Digital Revolution will add US$1trillion to the Asean economy by 2025. The Asean Internet Economy is expected to reach US$200 billion that year, and then to grow to US$625 billion by 2030 when it would represent 8 percent of Asean GDP.

With 70 per cent of its population under 40, adaptability to new technologies is going to be an alpha in the region. It is one of the fastest growing Internet regions in the world, reaching an estimated 480 million users by 2020 (present Asean population is 630 million). The smartphone is becoming ubiquitous. In fact in Asia-Pacific as a whole, more people now view the small rather than the television screen, which is not the case in all other parts of the world.

CIMB Asean Research Institute (CARI) launched “Advancing Asean in the Digital Age” in Manila on 14 November during the Asean Summits, the first book to focus entirely on the fourth industrial revolution (4IR), among all the publications during the regional grouping’s 50th year celebrations. The book records ASEAN’s embrace of the digital revolution and all the good things that will come from it.

But there are also cautionary notes which must not be overlooked. Future prospect is not yet current reality. There are some challenges before Asean gets there – if it does.

Education and training are one of those challenges. There is a consensus among business leaders that the systems across Asean, except for Singapore, are not going to be able to sufficiently deliver, in the words of one of the contributors to the CARI volume, a “Think Force” that is “E-fit” for 4IR.

The missing link is inculcation of cognitive skills. As education system change takes time, this is a very serious problem which must be addressed with full commitment. Otherwise Asean could be caught in a perpetual cycle of playing catch-up. Those in business – even plain vanilla conventional activities – are fully aware of this gap. In the digital economy, it is going to be a gaping hole.

An American operating from Manila, with an electronic credit score data base for underserved micro enterprises seeking finance (he already has one million accounts from a couple of Asean countries) uses data scientists out of New York because they are hard to find in the region. So even as jobs are displaced, new jobs created may not be filled.

Upskilling of course is an immediate answer, but it is not so easy to implement. Some studies show that three fourths of American jobs which President Trump claims were lost because of imports actually went down the chute as a result of 4IR displacement, and an inability to retrain and upskill the workers involved.

In Asean only Singapore has a successful upskilling system, no doubt also based on an already generally well-educated work force. If the base level of education is poor, successful retraining and upskilling will not be possible.

When Singapore takes the chair of Asean next year, while there will be a focus on the digital economy, will there be a sharing of experiences and cross-border cooperation on fulfilling the educational and training needs of the 4IR?

Asean leaders must cease rushing from one meeting to another at their summits. They should identify priority areas of Asean concern to focus on. The 4IR is one such priority. But they should concentrate not just on the opportunities but also on the challenges of the digital economy.

If they did not, not only will realization of the opportunities of 4IR be sub-optimal, but the cohesion of the regional grouping could be at risk.

For, the economic divide among Asean countries will get worse as the digital divide pulls apart the different member states based on threat to employment and on disparity of capability to extract the benefits of the digital economy.

One of the foundational narratives of the regional grouping is that ASEAN’s greater economic integration will attract foreign manufacturing investment based on low labour costs in such destinations as Indonesia, Myanmar, Philippines and Vietnam. With 4IR the low labour cost argument is gone, as cheaper and more efficient robotic manufacturing displaces human labour. Indeed re-shoring is already taking place.

Not only is that expected manufacturing investment not going to take place but also existing employment is going to be displaced. This double-whammy is hardly likely to make countries like Indonesia a great enthusiast of Asean economic integration, or even of Asean. Barriers will come up and attention will be focused inward to address social and political problems.

The challenge is not limited to manufacturing. It cuts across all sectors, including services. A Khazanah study for Malaysia puts the probability factor of computerizable jobs at 0.8 for unskilled and semi-skilled jobs. This is the high displacement risk. If this factor was applied across the region, the threat to an individual Asean country would be higher the lower down the economic ladder it is.

If Asean leaders thought about this at the regional level – a number already do at their own national level- they would commission baseline studies on the impact of 4IR on employment in the various Asean economies. And work on meaningful regional ways to ensure the economic divide is not widened further by the digital divide which would cause Asean to possibly fall apart. We talk so much about disruption these days. Here is a big one.

After 50 years, Asean is at a very important crossroad. Even if the worst does not happen, business leaders worry nagging fears about how exposed their economies might be to 4IR might lead different Asean countries to embrace policies, and come up with laws and regulations that constrict cross-border e-commerce, electronic payments, logistics, data exchange and the so very many other enablers of the Digital Age.

Thus all those big numbers will not be achieved.

More importantly, their peoples will be denied the benefits new technologies can bring for the protection they get in jobs no longer most efficiently performed. Their economies will fall further behind. Asean statesmanship is needed to navigate past the rough waters of the 4IR before the Asean ship arrives at its safe harbour.

Tan Sri Dr. Munir is Chairman of CIMB ASEAN Research Institute, and also of Bank Muamalat Malaysia Berhad, of the Financial Services Professional Board, of ASEAN Business Advisory Council, Malaysia, as well as President of the ASEAN Business Club. He sits on the board of the Institute of Strategic and International Studies (ISIS) Malaysia and on the Financial Services Talent Council of Bank Negara Malaysia.