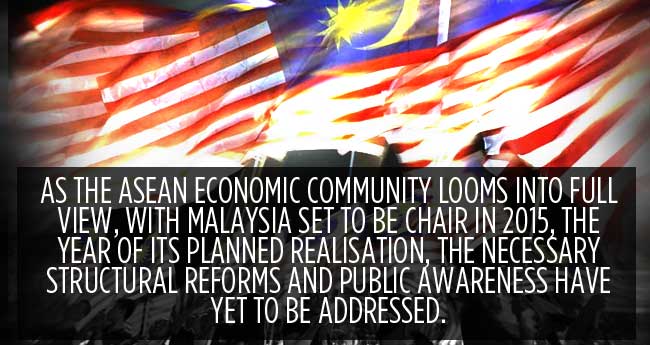 Any general election will focus on domestic issues, and this is just as true in ASEAN as anywhere else in the world – well at least for those six countries which are democratic enough to have elections.

This weekend (Sunday 5 May) Malaysia goes to the polls – its “thirteenth”[1] General Election. Sceptical outside observers might dismiss as hyperbole the description of this being possibly the country’s “most important election ever”. Certainly, the polls and hearsay and unattributed “expert opinion” all fluctuate from one day to the next as D-Day approaches.

Supporters of the opposition Pakatan Rakyat[2] will say it is the most important election ever because they could win at the federal level this time, having already won five out of the thirteen states in 2008. If they do win, it would be because of disenchantment with the incumbent Barisan Nasional at least as much as because of enthusiasm with the alternative. Though the leaders of the three parties main parties have formed a stronger pact this time round, there remain an array of sticking points and uncertainty over things like the application of hudud (a part of Islamic law favoured by PAS and vehemently rejected by DAP), and some voters have detected some complacency, even a hint of arrogance, after just one term already. Even on nomination day a handful of seats saw the coalition partners nominate candidates against each other: not a sign of entirely smooth negotiations.

Supporters of the Barisan Nasional – a coalition of now thirteen parties registered as a single entity, which with its predecessor the Alliance Party has governed the country since Independence – say it is the most important election ever because it will prove that they are adapting and very much still relevant. “Transformasi”, accompanied by an array of acronyms representing a host of initiatives and the ubiquitous use of the “1 Malaysia” brand, has been invoked by the sixth Prime Minister Dato’ Seri Najib Razak in response to the “reformasi” led by Dato’ Seri Anwar Ibrahim since his sacking as Deputy Prime Minister in 1998, the same year that Indonesia’s “Reformasi Era” began.

For sure, this election will largely be about personalities. There is still little ideological cohesion within the main parties, let alone coalitions. Certainly in terms of economic policy, the manifestos of both are equally thin and populist, boiling down to: “vote for us and we’ll give you back your money” – through subsidies and hand-outs. The absence of a right-left political spectrum on which parties explicitly place themselves also leads to every party housing both liberals and conservatives (as understood in advanced democracies throughout the world). Still, the populist rhetoric on the cost of living and battling corruption has somewhat relegated a previous dominance on issues of race and religion, although inevitably some enthusiastic hardliners focus on such themes to galvanise a particular share of the voters.

This election is, however, a test of sorts for civil society. The growth – in terms of absolute number, political impact and strength in the media – of civil society and non-governmental organisations has been phenomenal over the past few years. There an increasing number of think tanks hosting debates, lectures and seminars – activities that now seem to be a permanent fixture in Malaysian democratic and academic space – and pressure groups and coalitions of all sorts have ballooned. Of particular prominence in recent years are Bersih, which held three increasingly large rallies to call for electoral reform, and the anti-Lynas movement, campaigning against a rare earths plant run by the Australian company in the state of Pahang.

The election is also important because of the way in which other national institutions may respond after the results are out. After the 2008 election, the transition to state governments formed by different political parties in four states[3] was not universally smooth. This time, however, institutions such as the civil service, police, military, statutory bodies, the judiciary and the country’s constitutional rulers (nine Malay Rulers and four Governors) are more prepared for the possibility of change and all the contestation that brings. Indeed, former police and military personnel – some relatively senior – have openly expressed their support or become candidates for the Pakatan Rakyat.

All of this has been catalysed by increasing access to alternative (i.e. mainly online) and social media. Increased internet penetration has also enabled abuses – authentic or fabricated – to be filmed and shared through YouTube, resulting in images of alleged state violence or sex scandals being widely distributed. To online-savvy first time voters, these may form their primary source of news.

Foreign issues have unsurprisingly been completely absent from the electoral agenda. The ASEAN Summit last week was attended by Heads of Government of every member country except Malaysia, which sent the President of its Senate (the upper chamber of Parliament unaffected by the elections). And yet, as the ASEAN Economic Community looms into full view, with Malaysia set to be chair in 2015, the year of its planned realisation, the necessary structural reforms and public awareness have yet to be addressed.

Even the hottest topic last month – the cross-border incursion in Sabah by gunmen proclaiming to represent the Philippines-based Sultanate of Sulu (long dispossessed of its sovereignty and itself subject to multiple claimants) – has virtually disappeared from the headlines, at least in the country’s peninsula.

As in Singapore and Thailand in 2011 and Myanmar in 2012, elections in ASEAN countries will focus overwhelmingly on domestic issues. Few will expect any different in the upcoming Philippines midterms and Indonesian presidential and legislative elections in 2014. True, some countries in ASEAN are more democratic than others, but for now, its programmes enjoy little public knowledge and even less democratic legitimacy. The European project only saw truly pro- or anti-EU parties after much power had already shifted to Brussels. Having acquired power on the platform of domestic issues, ASEAN governments would do well to articulate their regional aspirations transparently.

[2] Formally comprising of the secular Democratic Action Party (DAP), Pan-Malaysian Islamic Party (PAS)and the People’s Justice Party (PKR), though there is cooperation with the much smaller Socialist Party of Malaysia (PSM) too.

[3] Selangor, Penang, Perak and Kedah. Kelantan has been in PAS hands since 1990.