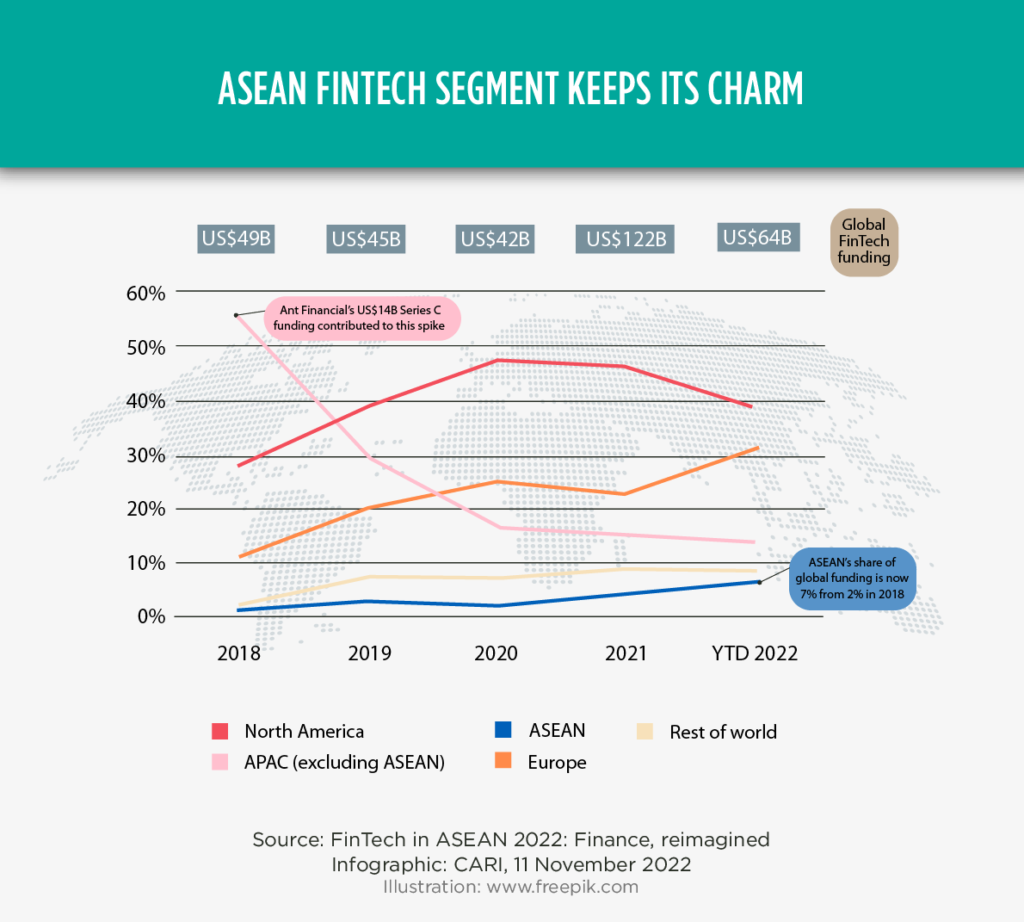 ASEAN
ASEAN fintech segment keeps its charm
(7 Nov 2022) The Fintech in ASEAN report, a joint production by UOB, PWC and the Singapore Fintech Association found that fintech funding activity in ASEAN posted US$4.3 billion in the first nine months of 2022 despite geopolitical uncertainties and rate hikes to combat high inflation. The average deal size has also increased to US$26.5 million from US$23 million year-on-year since 2021. Together, Singapore (43%) and Indonesia (33%) accounted for more than three-quarters of ASEAN’s total funding. Of the 163 funding deals, more than half (55%) went to Singapore-based fintech firms. The payments category received the most funding at US$1.9 billion, followed by alternative lending at US$506 million. Despite the broader crypto market’s volatile performance this year, the cryptocurrency category took third place at US$461 million.

ASEAN
40th and 41st ASEAN Summits commence in Cambodia from 10-13 November 2022
(10 Nov 2022) This is the first time the ASEAN will be holding the event in person since the start of the COVID-19 pandemic. The 2020 summit, chaired by Vietnam, and the 2021 summit, chaired by Brunei, were held online. Cambodia is this year’s ASEAN chair, and the leaders at the summit, to be held in the capital Phnom Penh, will discuss how the 10 countries in the association can promote peace, prosperity and stability in the region as it recovers from the pandemic. The theme for this year’s summit is “ASEAN A.C.T: Addressing Challenges Together”. Leaders will discuss the worsening situation in Myanmar and other regional and international developments.

Laos PDR
Inflation in Laos surges to recorded high of 36.75% in October 2022
(7 Nov 2022) Laos recorded the highest year-on-year inflation rate at 36.75% in October, up from 34% in September, according to the latest report from the Lao Statistics Bureau. According to the report released on Saturday from the Lao Statistics Bureau website, the price of food and non-alcoholic beverages has surged by 38.8% year on year, driven by the rising price of rice and other daily food items such as pork, poultry, fish, seafood, eggs, vegetable oil, fruit, and vegetables. Commercial transport and delivery charges rose by 58.1% compared to the previous month, especially for fuel, which was recorded at 95% in October. The cost of other consumer goods and many other products also rose, including clothing, footwear, construction materials, household items, medical equipment, and medicines.

THAILAND
Thailand scraps plan to allow foreigners to buy land
(8 Nov 2022) Thailand is walking back a policy that would have allowed limited land ownership by wealthy foreigners after a public backlash against the plan. Earlier this year, the government announced the plan aimed at attracting investment from overseas, limiting foreigners to 0.16 ha of land if they invest at least 40 million baht (US$1.07 million) in securities or bonds for at least three years. Critics have argued the investment sum was too small and that the policy could drive up property prices, crowding out local ownership. Interior Minister Anupong Paochinda called the issue “a delicate matter” and said a study was needed to weigh the advantages and disadvantages.

VIETNAM
Vietnam to require 24-hour take-down for “false” social media content
(4 Nov 2022) Vietnam’s Minister of Information and Communications, Nguyen Manh Hung, said that authorities had tightened regulations to deal with “false” content on social media platforms so that it must be taken down within 24 hours instead of 48 hours previously. Speaking to the legislature, Hung proposed by 2023 to completely deal with “News-lisation”, a term used by authorities to describe when people are misled into thinking that social media accounts are authorised news outlets. Vietnam, which is a US$1 billion market for Facebook, has tightened internet rules over the past few years, culminating in a cybersecurity law that came into effect in 2019 and national guidelines on social media behaviour introduced in June last year. Critics have raised concerns the laws could hand the authorities more power to crack down on dissidents.

ASEAN/JAPAN
Japan to support ASEAN decarbonization
(10 Nov 2022) Japan’s Prime Minister Kishida Fumio has expressed intent to help businesses in the ASEAN member nations to raise funds needed for achieving carbon neutrality. He referred to Japan’s support for expanding a “transition finance” framework to help with decarbonization. Kishida said the ASEAN economy is expected to grow 2.7-fold by 2050, and securing the energy and infrastructure needed for growth while taking measures to cope with climate change is a major challenge. Kishida said the idea of pursuing growth while reducing carbon dioxide emissions as much as possible is important and added that Japan will face this challenge with ASEAN members.

CHINA
China reaffirms commitment to Covid-Zero policy
(7 Nov 2022) Oil slumped as China’s continued adherence to its Covid-Zero policy dampened hopes of a demand rebound. Most commodities dropped Monday as China signaled a continuation of its Covid-Zero policy. Tight fuel supplies and a weakening dollar contained the drop, at one point propelling the Brent above US$99 a barrel to its highest intraday since the end of August.

SOUTH KOREA
Alibaba’s international arm spending millions to expand into South Korea
(7 Nov 2022) Alibaba’s international e-commerce business AliExpress is spending the equivalent of US$7 million to reach consumers in South Korea. AliExpress said it launched three-to-five-day shipping to South Korea last year, allowing South Korean residents to buy some products, especially in fashion, from Taobao, Alibaba’s main e-commerce site in China. The investment looks to tap a market that’s valued at billions of dollars, and currently dominated by the U.S. South Koreans’ online purchases from foreign retail sites grew by US$1 billion in 2021 to US$4.5 billion, with 41% stemming from the U.S., according to a August 2022 report by the U.S. International Trade Administration.