Home / News & Views / CARI Captures Issue 572: AANZFTA in process of being upgraded, to focus on rules of origin and e-commerce

CARI Captures Issue 572: AANZFTA in process of being upgraded, to focus on rules of origin and e-commerce 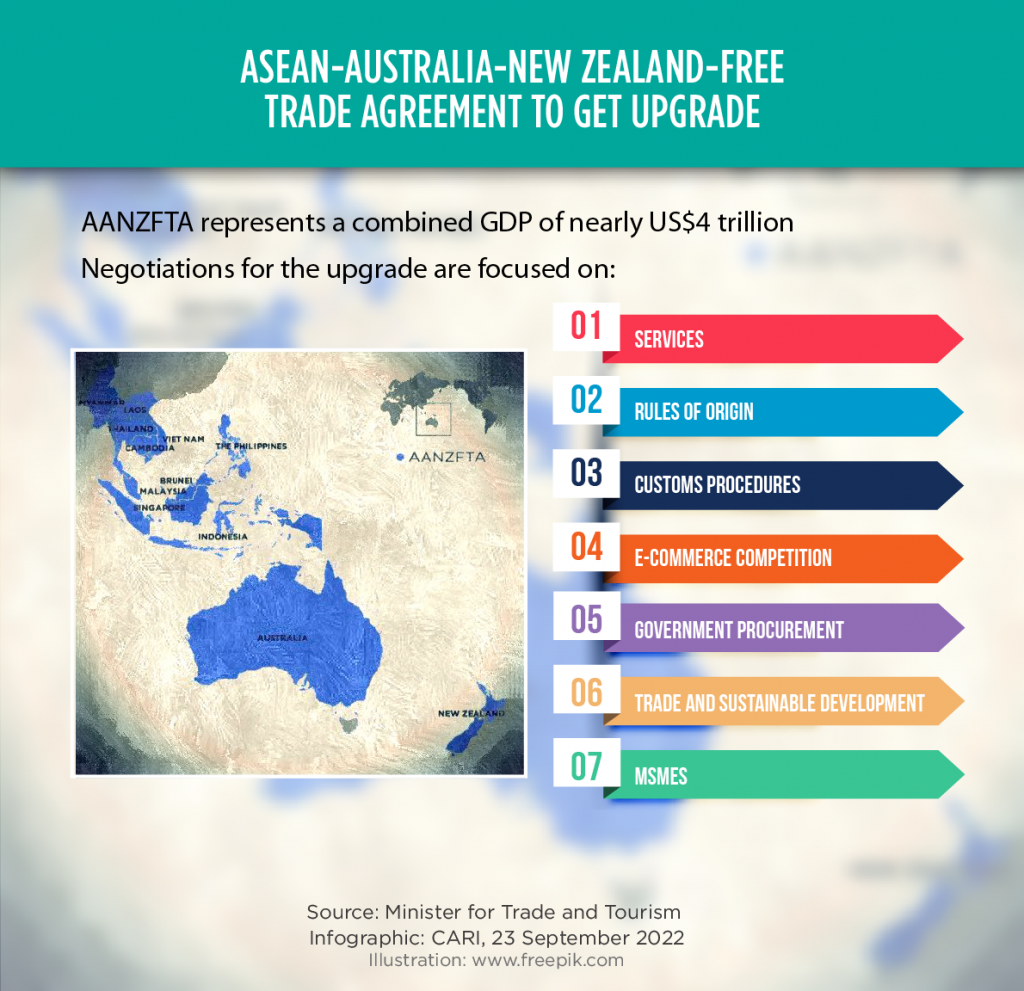 ASEAN, AUSTRALIA, NEW ZEALAND
AANZFTA in process of being upgraded, to focus on rules of origin and e-commerce
(18 September 2022) The ASEAN-Australia-New Zealand Free Trade Agreement is in the process of being upgraded, with key upgrades expected to include a simpler process to validate the origin of goods and improved e-commerce arrangements. Australia’s two-way trade with ASEAN has pulled ahead of the United States and Japan, and is currently second only to China. Among the changes proposed include switching from government organizations issuing certificates of origin to self-declaration. The AANZFTA was the first region-to-region trade deal signed by ASEAN, although industry groups now argue that the agreement needs to be updated with the times. On 20th September, Australia’s Assistant Minister for Trade Senator Tim Ayres released a statement noting that ASEAN, Australia and New Zealand had ‘progressed negotiations’ to upgrade the agreement. He noted that the purpose of the upgrades is to modernize the trade agreement, further reduce trade barriers and boost trade and investment within the region.

THAILAND, VIET NAM
Thailand and Viet Nam top crypto trading hubs within ASEAN, recording over US$100 billion in transactions in one year
(21 September 2022) Thailand and Viet Nam have become the top crypto trading hubs among the ASEAN states, even beating traditional financial center Singapore. Both countries recorded over US$100 billion in crypto-related transactions each from July 2021 to June 2022, according to numbers published on Wednesday by blockchain data platform Chainalysis. Thailand recorded US$135.9 billion in crypto value transacted over the year, while Vietnam logged US$112.6 billion. Meanwhile, Singapore booked just US$100.3 billion as financial regulators within the country tighten scrutiny over the crypto sector. Both Thailand and Viet Nam also saw high traffic to marketplaces for non-fungible tokens (NFTs) that give their owners the deeds to items like virtual art pieces on blockchain.

THE PHILIPPINES, INDONESIA
Central bank of the Philippines and Indonesia raise benchmark interest rates in response to inflation
(22 September 2022) The central banks of the Philippines and Indonesia raised their benchmark interest rates on 22 September, 2022 in response to inflationary pressures. The Philippines raised rates by 50 basis points or half a percentage point, bringing the benchmark to 4.25%, the highest since August 2019. Bank Indonesia, for their part, hiked its policy rate for the second consecutive month, also by 50 basis points to 4.25%. The Philippines has increased its rates by 225 basis points since May 2022, with inflation averaging 4.9% on the year from January to August. As well, the Philippines’ central bank raised its full-year inflation outlook for 2022 to 5.6%, from 5.4%. Meanwhile, in Indonesia, Bank Indonesia projects CPI to reach higher than 6% by the end of 2022. The central bank noted that inflationary pressures are expected to increase in September following an adjustment of subsidized fuel prices while global energy and food prices remain high.

INDONESIA
Gojek launches joint venture with TBS Energi Utama to supply 2 million electric e-motorbikes
(20 September 2022) Indonesian ride-hailing group Gojek launched a joint venture with energy group TBS Energi Utama in 2021 to supply e-motorbikes, in order to help Gojek make its fleet all-electric this decade. The joint venture, called Electrum, will be able to supply some 2 million e-motorbikes, according to a recent interview of a Gojek top executive. The new company is also expected to help develop Indonesia’s electric vehicle ecosystem by leveraging Gojek’s nationwide presence and TBS’s energy expertise. Thus far, Electrum operates 13 battery-swapping stations in Jakarta and has supplied Gojek with about 300 e-motorbikes. Gojek currently has more than 2 million registered drivers for its Indonesian ride hailing and delivery services, both of which overwhelmingly use motorcycles. Recent hikes in fuel prices are expected to accelerate the movement towards electric vehicles.

THE PHILIPPINES
The Philippines posts balance of payment deficit for fifth straight month in August 2022
(19 September 2022) According to the Bangko Sentral ng Pilipinas (BSP), the Philippines posted a balance of payment (BOP) deficit for a fifth straight month in August 2022, as the national government withdrew from its deposits to settle foreign currency debt obligations during the month. The BSP reported a US$572-million BOP deficit in August, which compares with the US$1.819-billion deficit in July and the US$1.044-billion surplus the same month in 2021. The latest data from the Bureau of the Treasury found that the government’s running debt rose to a fresh record-high of US$220 billion as of end-July 2022. The latest monthly deficit brought the year-to-date BOP level to a US$5.492-billion deficit, higher than the US$253-million deficit in the comparable period of 2021. In terms of the balance of trade in goods, it was noted that it stood at a US$5.93 billion shortfall in July, up 69.1% from the US$3.5 billion gap in July 2021.

SINGAPORE
Cost of business in Singapore outpacing that of rival Hong Kong, including in cost of office space and utilities
(22 September 2022) The cost of business in Singapore is rising at a faster pace than that of rival Hong Kong, with expenses including the hiring of talent, office space and utilities outpacing that of its rival, which has seen only modest price increases. Despite this, the rate of new business formation in Singapore reached a 17-month high in August 2022, signaling its current attractiveness to firms wanting to exit Hong Kong. In Hong Kong, the number of new local businesses held roughly steady with 2021’s pace but is down from a peak in 2017. In terms of the office rental market, while Singapore’s rental costs remain well below Hong Kong’s, landlords in the latter have slashed office rents in core business districts through June 2022 by 4% from December 2021. In contrast, the cost of rent in Singapore’s central business area accelerated for a third quarter. As well, both city-states are seeing a divergence in labor tightness, with Singapore’s high ratio of job vacancies to those unemployed resulting in salaries for new job offers rising faster than those in Hong Kong in many key sectors in 2021.

AUSTRALIA
Central bank states that interest rates are approaching ‘normal settings’ according to minutes
(20 September 2022) The Reserve Bank of Australia (RBA) stated that interest rates are approaching ‘normal settings’ in minutes of its meeting on 06 September, 2022, when it raised rates by half a percentage point to 2.35%. The minutes noted that the RBA expects to raise rates further over the coming months, although not on a ‘pre-set path’ given uncertainties over the future path of inflation and growth. The minutes also noted that the central RBA discussed whether to raise rates by a quarter-point or half-point.The RBA has recently overseen the sharpest tightening cycle in a generation, pointing to a very tight labor market and resilient household spending to argue that the Australian economy can absorb the moves. Australia, like many other developed economies, is currently attempting to reign in inflation which is expected to peak at just under 8% later in 2022.

JAPAN
Japan to resume visa-free entry for individual travelers on 11 October
(22 September 2022) Japan will resume visa-free travel for individual travelers on 11 October, as the country moves to return its border rules to pre-pandemic norms for the first time in about two and a half years. Japan will also remove the cap on the number of people allowed to enter the country. As of now, Japan only allows package tours and requires visas for all visitors, due to efforts to control COVID-19. Daily arrivals have also been capped at 50,000. As of 11 October, short-term visitors will no longer be required to apply for tourist visas. The Japanese government hopes to take advantage of its weak yen to boost the economy through inbound tourism. The yen is currently at a 24 year low, touching 145 per dollar at one point. Prior to COVID-19, Japan accepted a record 31.8 million visitors in 2019.

NEW ZEALAND
New Zealand set to become only OECD country that will not publish monthly CPI data
(23 September 2022) New Zealand is set to become the only OECD country that will not publish monthly Consumer Price Index (CPI) data. While Australia’s statistics bureau announced in August 2022 that it will start publishing monthly CPI data from October onwards, Statistics New Zealand stated it has no current plans to follow suit. This will leave New Zealand the last remaining OECD country still relying on quarterly data, meaning a three-month gap between its inflation reports. As such, although New Zealand’s central bank’s next monetary policy review is on 05 October, third-quarter inflation data won’t be published until 18 October. Statistics New Zealand attributed a lack of funding as to why it won’t be publishing monthly CPI data.