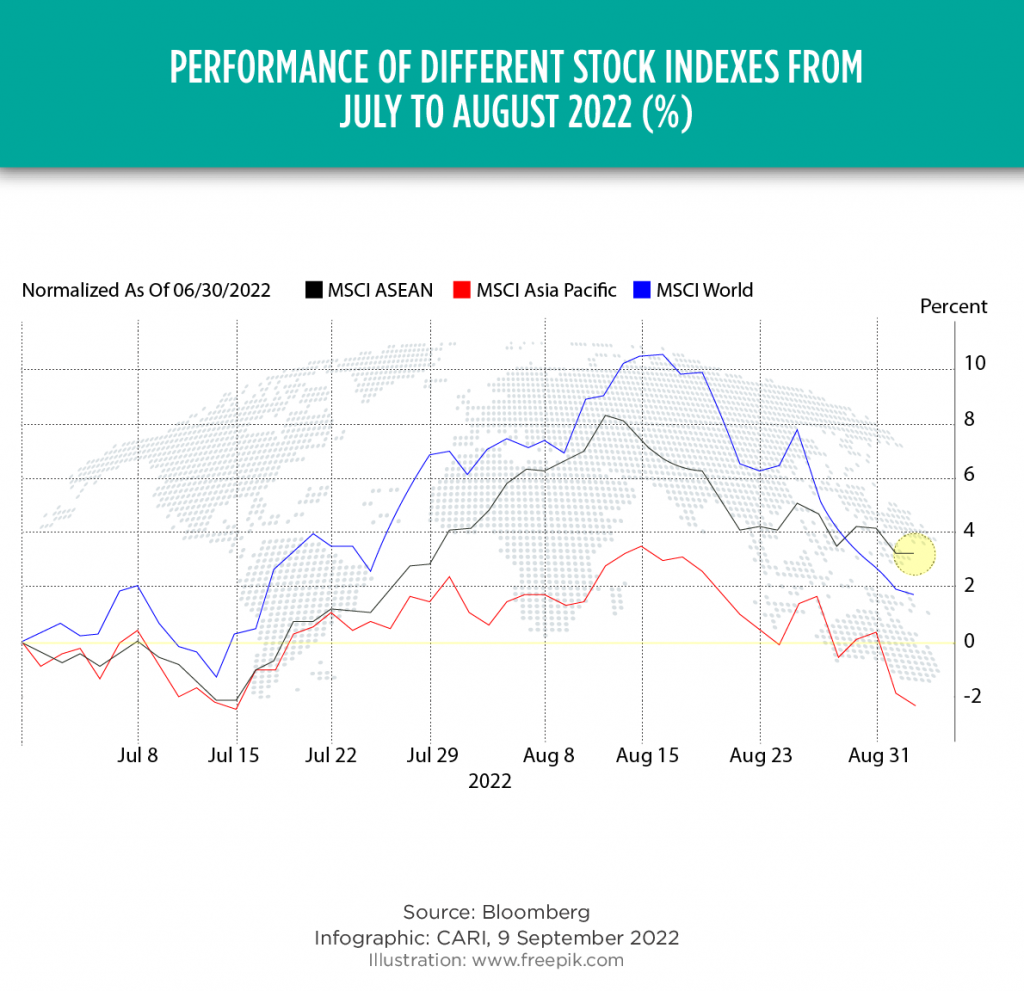 ASEAN
ASEAN equities outperform global peers despite gloomy global outlook
(04 September 2022) While global equities are struggling due to ongoing monetary tightening by the US Federal Reserve, ASEAN equities are outperforming global peers and are becoming a haven for global investors. The benchmark MSCI Asean Index is outperforming the broader MSCI Asia Pacific Index and is set to fare better than a gauge of global stocks for a third straight quarter. The bullish sentiments towards the region is due to a resurgence of tourism, booming domestic demand, and promising earnings outlooks due to commodity exports. Most of the region’s major economies are expected to grow by at least 5% in 2022. The heavy weightage of Southeast Asia’s equity benchmarks towards banks rather than tech make the region’s equities favorable in a high interest rate environment. Market watchers do not expect an exodus of capital due to tightening by the Fed as had occurred in 2013, due to the region’s stronger fundamentals. Inflation is also less acute in Southeast Asia compared to other regions.

MALAYSIA
Central bank raises overnight policy rate (OPR) by 25 basis points in response to inflation
(08 September 2022) Malaysia’s central bank, Bank Negara Malaysia (BNM), has raised its overnight policy rate (OPR) by 25 basis points to 2.5% in line with expectations. This is BNM’s third consecutive 25 basis point OPR hike in 2022, bringing the year-to-date increase to 75 basis points. The ceiling and floor rates of the OPR’s corridor are correspondingly increased to 2.75% and 2.25% respectively. Given the positive growth prospects of the Malaysian economy, BNM’s current stance of monetary policy is expected to remain accommodative and supportive of economic growth moving forward. Downside risks to the Malaysian economy include weaker-than-expected global growth, further escalation of geopolitical conflicts, and worsening supply chain disruptions. In terms of inflation, BNM stated that the consumer price index (CPI) is projected to peak in the third quarter of 2022 before moderating thereafter.

INDONESIA, THE PHILIPPINES
President Marcos Jr.’s visit to Indonesia secures about US$8.5 billion in investment pledges
(07 September 2022) The Philippines President Ferdinand Marcos Jr. secured about US$8.5 billion in investment pledges during his visit to Indonesia. Among the preliminary agreements signed in Jakarta included US$7 billion in infrastructure projects through private-public partnerships (including a four-level expressway), as well as a US$662-million trade value for the supply of coal and fertilizers. As well, Marcos Jr. also secured about US$822 million in investments in several sectors including textiles, garments, renewable energy, technology and agriculture. Altogether, the deals are expected to generate some 7,000 new jobs in the Philippines. After visiting Indonesia, Marcos. Jr is now visiting Singapore on the second leg of his first official trip abroad.

INDONESIA
Indonesia raises about US$2.65 billion from the sale of dollar bonds, defying global selloff
(07 September 2022) Indonesia raised about US$2.65 billion from the sale of dollar bonds, defying the global selloff, defying the global selloff caused by the rise in borrowing costs. Bolstered by its commodity exposure, Indonesian assets have emerged as a haven for investors in 2022, with Indonesia’s equity market up nearly 10%. Spreads on the country’s dollar-denominated debt narrowed the most in more than two years in August. While the five year and ten year maturities were in line with the market, the 30-year portion of the debt priced more than 20 basis points outside the curve, indicating the government had to pay extra. However, the longest maturity was still six times oversubscribed. Proceeds of the bond sale will be used to repurchase outstanding debt as well as for government expenditure, which has risen due to surging energy costs. While US dollar bond sales across Asia have stalled due to a strong dollar and rising interest rates, Indonesia still managed to attract investors from Europe and North America.

SINGAPORE
Singapore hotel room prices rise to highest in almost a decade as tourism surges
(05 September 2022) Singapore hotel prices have surged to its highest in almost a decade as the country seeks to reposition itself as the tourism and business destination in Asia following the COVID-19 pandemic. The average hotel room rate in July rose nearly 70% year-on-year to US$184 a night, the highest since September 2012. Visitors to Singapore continue to accelerate amidst a loosening of COVID-19 restrictions, with arrivals rising for the sixth straight month in July to 726,601, up from 543,733 in June. This growth in tourist arrivals is likely to hold as the country plays host to a growing number of international business and sporting events in 2022, including the Formula One Grand Prix from 30 September to 02 October, several music concerts later this year, the Milken Institute Asia Summit, Forbes Global CEO Conference and several crypto events in September, followed by gamescom asia in October. Between four to six million visitors are expected in 2022, with 1.5 million arrivals in the first half of 2022 alone.

THAILAND
Hotel occupancy rate in Thailand rebounds from pandemic low due to resurgence in tourism
(08 September 2022) The hotel occupancy rate in Thailand is rebounding from a record low during the COVID-19 pandemic, according to a joint survey by the Bank of Thailand (BoT) and the Thai Hotels Association (THA). The average room occupancy at Thai hotels was 48% in August 2022, up from 46% a month earlier. This helped lift the average employment rate at these hotels to 75% from 71% in July. Hotels in Thailand are benefiting from a global rebound in tourism as authorities scrap all COVID-19-related restrictions. Hotels were also supported by a government-funded air travel and hotel subsidy program. Tourism is a major economic sector for Thailand, accounting for 12% of GDP and 20% of total employment. Authorities expect foreign tourist arrivals in 2022 to exceed 8 million.

AUSTRALIA
Australia’s economy expands 3.6% y-o-y in second quarter, buoyed by household spending and exports
(07 September 2022) Australia’s economy expanded by 3.6% in the second quarter of 2022, buoyed by household spending and high export values. The economy also expanded by 0.9% from the first quarter. The strong growth validated the central bank’s hawkish approach towards tackling inflation, having hiked by a half percentage point on 06 September to take the cash rate to 2.35%. The central bank is relying on strong household spending in the face of surging prices and rising borrowing costs. GDP growth is expected to decelerate in 2023 to less than 2% as higher interest rates weigh on demand. Tackling the fastest inflation Australia has faced since the early 1990s, the central bank has raised rates by 2.25% since it began the current tightening cycle in May 2022. Money markets are betting that Australia’s rate will rise to 3.2% by end-2022, before peaking at 3.75% in 2023.

JAPAN
Japan’s economy expands by annualized 3.5% in second quarter of 2022, beating initial estimates
(08 September 2022) Japan’s economy expanded by an annualized 3.5% in the second quarter of 2022, beating initial estimates. Economists had expected a 2.9% expansion, compared with an initial reading of 2.2%. The main driver of the upward revision was stronger business spending, private consumption, and net exports. Japan’s pace of growth is expected to slow in the third quarter of 2022 due to a record virus wave and continued supply chain snarls hitting production and consumer spending, while inflation impacts households. The yen has reached a 24 year low against the US dollar, fueling higher energy and imported food costs. While a weaker yen boosts Japanese companies’ overseas earnings, it is also negatively affecting wage growth in Japan itself, likely impacting the recovery in household expenditure moving forward. Due to the lack of wage gains, the Bank of Japan is keeping its monetary stimulus program intact to ensure inflation becomes more sustainable.

SOUTH KOREA
Outflow of foreign investment funds likely to accelerate if global financial risks persists
(08 September 2022) The Bank of Korea (BOK) warned that an outflow of foreign investment funds from South Korea is likely to accelerate if global risks continue to affect global financial markets. Among the global risks which would impact developing economies as well as South Korea include US Federal Reserve tightening, an escalation of Russia’s war on Ukraine and China’s deepening economic slowdown. The BOK has raised interest rates by 2% since August 2021, acting in advance of most developed-world peers. Rapid tightening by the US Federal Reserve is pressuring the BOK to remain aggressive as the won weakens to a 13 year low. The won is also being impacted by widening trade deficits and ongoing policy easing in neighboring Japan and China. The anticipation of a further weakening of the won is putting pressure on foreign investors to withdraw funds, which in itself further weakens the currency.