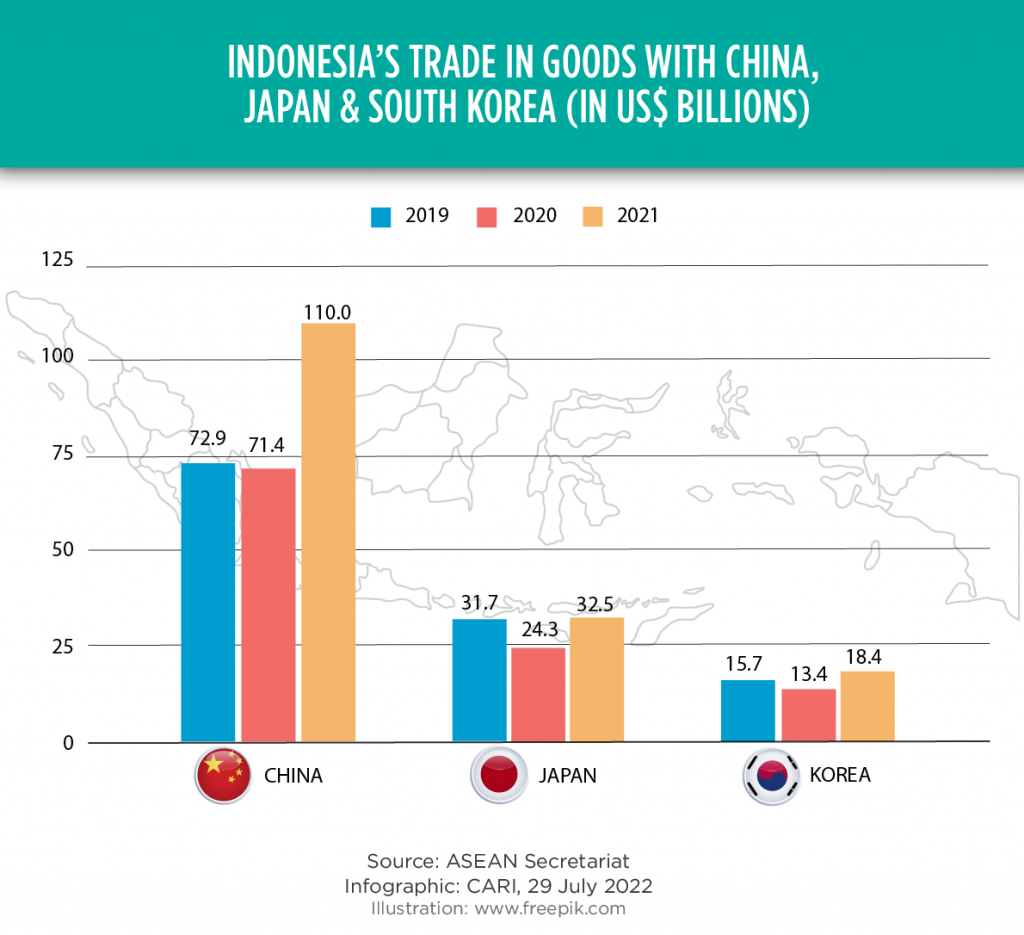 INDONESIA
President Jokowi visits China, Japan and South Korea
(26 July 2022) President Joko Widodo embarked on a three-day visit to Northeast Asia this week ahead of the G20 leader’s summit to be held in Bali in November. The president started his tour in Beijing where he met President Xi Jinping and Premier Li Keqiang. China pledged to import another one million tonnes of crude palm oil and prioritise agricultural imports from Indonesia during the meeting. He then visited Japanese Prime Minister Fumio Kishida in Tokyo, where the latter agreed to provide US$318.25 million in infrastructure and disaster prevention loans to Indonesia. In Seoul, he met President Yoon suk-yeol and Korean business leaders.

SINGAPORE
Singapore’s core inflation is at its highest since November 2008
(25 July 2022) Singapore’s core inflation rose by 4.4% year-on-year in June, up from a 13-year high of 3.6% recorded in May, bringing core inflation to its highest in almost 14 years when it came in at 5.5%. Overall inflation or the headline consumer price index rose by 6.7% year-on-year in June, up from 5.6% in May. This was similarly reflected across all sectors — food inflation came in at 5.4%, retail and other goods at 3.1%, electricity and gas prices at 20%, services inflation at 3.4%, accommodation inflation at 4.2%, and private transport at 21.9%. The government expects core inflation to reach between 4-4.5% in the third quarter before easing to 3.5-4% in the fourth quarter.

BRUNEI
Central bank expects a low inflation rate in 2022
(24 July 2022) Brunei’s central bank expects inflation to remain low at between 2-3% this year despite global inflation and Singapore’s monetary policy tightening. Brunei’s monetary system is underpinned by the Currency Interchangeability Agreement that it has with Singapore and the Brunei dollar is pegged to the Singapore dollar. Inflation in Brunei averaged 1.2% between 1981-2018, though it rose by 3.8% year-on-year in March 2022 due to higher food import prices. Meanwhile, assets in the financial sector grew by 7.9% year-on-year to US$17.2 billion, with deposit-taking institutions accounting for 92% of total assets.

LAOS, VIETNAM
Bilateral trade was up 20.6% in 1H22
(26 July 2022) Trade between Vietnam and Laos rose by 20.6% year-on-year to US$824 million in the first six months of 2022. Of the sum, Vietnam’s imports from Laos grew by 45.4% to US$514.6 million, though its exports to Laos fell by 6% to US$309.4 million. Vietnam’s top export product to Laos—petrol—was up by 254.7%, accounting for US$30.2 million of the sum. Its exports of fruits and vegetables were also up by 78.1%, accounting for US$22.4 million. Bilateral trade in June alone totalled US$134 million and the uptrend is expected to continue following the Lao government’s recent approval of a credit package to import 200 million litres of fuel.

AUSTRALIA
Australia’s inflation rate reaches 6.1% in June
(27 July 2022) Australian inflation rose further in the second quarter, coming in at 6.1% in the year through June, up from 5.1% in the quarter through March — its fastest annual increase since 2001. Transportation prices increased by 13.1% as petrol prices also rose for the fourth quarter in a row fuelled by the Russia-Ukraine war, while vegetable and fruit prices increased by nearly 6%. Analysts say that the central bank will likely respond by raising interest rates again. Meanwhile, inflation in neighbouring New Zealand reached a 32-year high as it rose by 7.3% in the June quarter.

(24 July 2022) South Korea’s arms exports rose by 177% during the 2017-2021 period compared to the 2012-2016 period, making it the fastest-growing arms exporter in the world according to a report by the Export-Import Bank of Korea. The country is now the eighth largest arms exporter globally and the second largest player in Asia after China. Its share of global arms exports also grew threefold from 1% to 2.8%, with exports expected to reach US$10 billion in 2022. The Philippines and Indonesia are its two biggest buyers, accounting for 16% and 14% of sales respectively.

CHINA
China Belt and Road spending dips in 1H22
(26 July 2022) China’s investment in Belt and Road countries fell to US$28.4 billion in the first half of the year from the US$29.6 billion recorded the previous year, according to research published by the Shanghai-based Green Finance and Development Center, bringing total cumulative investment to US$932 billion since the initiative was launched in 2013. The report also noted that there were no new investments in Russia, Egypt and Sri Lanka, as well as no new investments in coal projects ever since China pledged to stop funding coal projects overseas at the United Nations in September 2021.