CARI Captures Issue 563: ADB cuts growth forecasts for developing Asia for 2022, with only Indonesia and the Philippines upgraded 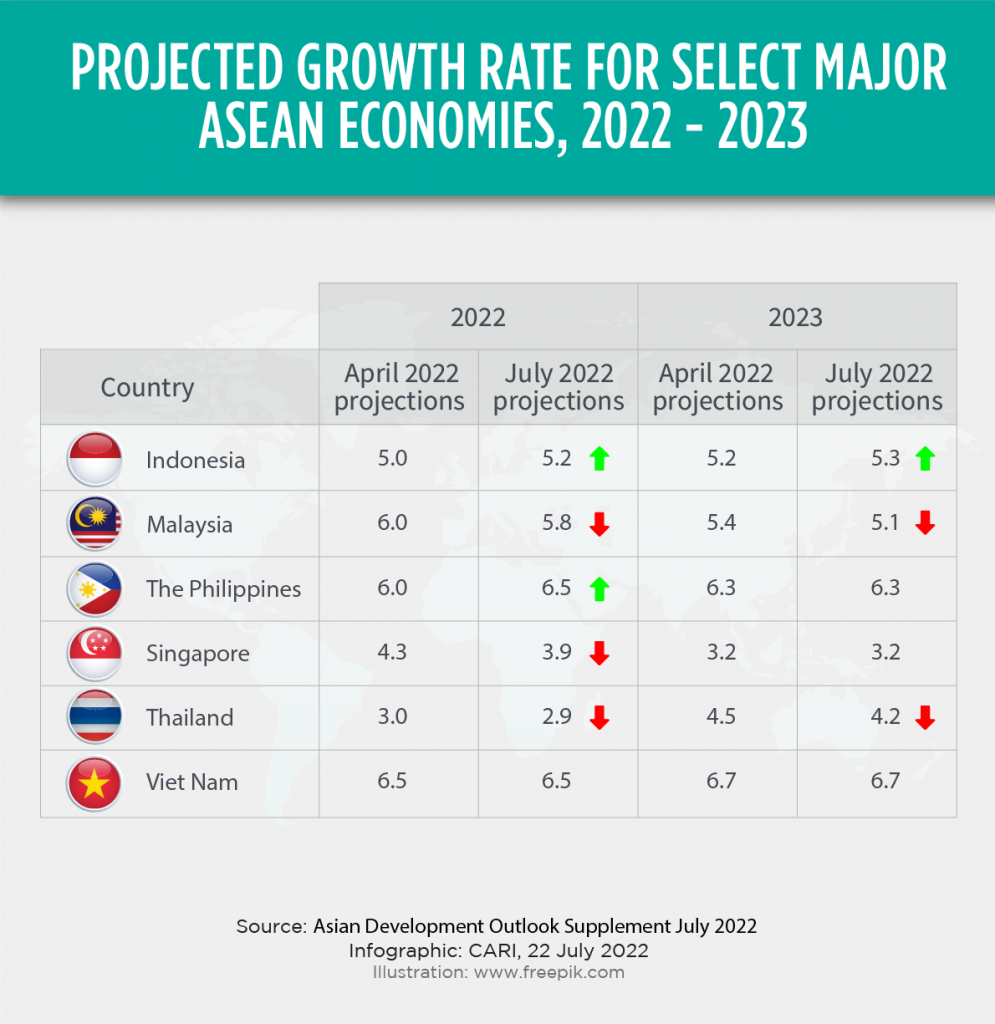 ASEAN
ADB cuts growth forecasts for developing Asia for 2022, with only Indonesia and the Philippines upgraded
(21 July 2022) The Asian Development Bank recently slashed its growth forecasts for developing Asia in 2022 to 4.6% from an earlier forecast of 5.2% in April 2022, amidst monetary tightening by the US Federal Reserve, fallout from the war in Ukraine, and zero-COVID-19 strategies pursued in China. However, Indonesia and the Philippines were the only two out of about a dozen economies to see their growth forecasts revised upwards. The Philippines’ growth forecast was upgraded to 6.5% growth for 2022 from 6%, while Indonesia was raised to 5.2% from 5%. The Philippines’ growth momentum is underpinned by strong domestic demand, a pick up in employment and remittances, and large infrastructure projects. In Indonesia, strong growth has been underpinned by robust domestic demand and exports. For Southeast Asia as a whole, the growth forecast was marginally upgraded from 4.9% to 5.0%.

INDONESIA
Indonesia’s central bank keeps rates unchanged to support economic growth
(21 July 2022) Indonesia’s central bank kept its rates unchanged to support economic growth, bucking the current international trend towards monetary tightening. Bank Indonesia left the seven-day reverse repurchase rate at a record low 3.5% on 21 July. Bank Indonesia’s Governor cited within-target core inflation to justify the case for continuing with the easy policy. Indonesia’s economy has the fiscal room to cope with supply-driven price pressures, thanks in part due to the windfall from commodity exports. Although headline inflation breached the central bank’s 2%-4% target range, the governor stated that it will return to target in 2023, while pointing out that price gains in the core measures tracked by the central bank will remain within range. The central bank stated that it sees the economy expanding more toward the lower end of a 4.5%-5.3% outlook range.

MALAYSIA
Samsung SDI Co Ltd breaks ground on US$1.3 billion battery factory in Negeri Sembilan state
(21 July 2022) On 21 July, South Korean company Samsung SDI Co Ltd broke ground on a US$1.3 billion battery factory in Negeria Sembilan state. The factory will produce cylindrical batteries, and will be located in Seremban, Negeri Sembilan. The batteries will meet the rising demand for cylindrical batteries, and will be used in applications including electrical tools and electric vehicles (EVs). The factory plans to start mass production in 2024. Malaysian officials stated that Samsung SDI’s investment in Malaysia is integral to the country’s vision of driving robust economic growth in the country and Negeri Sembilan as outlined in the Malaysia Vision Valley 2.0 plan. Samsung SDI is undertaking its Malaysian operations through its local subsidiary Samsung SDI Energy Malaysia Sdn Bhd (SDIEM). Established in 1991, SDIEM was the first overseas business entity of Samsung SDI.

THE PHILIPPINES
The Philippines looking to strike deals with world’s largest fertilizer suppliers, including Russia and China
(19 July 2022) The Philippines is seeking to strike deals with some of the world’s largest fertilizer suppliers, including Russia and China, in order to lower costs and increase food production amidst high inflation. President Ferdinand Marcos Jr. plans to reach out to countries such as China, Russia, Indonesia, United Arab Emirates and Malaysia to secure fertilizer supplies at favorable prices. President Marcos has stated that he wants to boost agricultural output over the next six months, in order to increase the country’s food security. Agriculture officials have warned of higher local prices of rice in the coming months due to surging fertilizer costs. Inflation in the Philippines averaged 4.4% in the first half of 2022, above the official 2% to 4% target band, with the June rate of 6.1% being the highest in nearly four years.

THAILAND
Combined market for medical marijuana and hemp to grow to US$1.2 billion by 2025
(21 July 2022) According to the University of Thai Chamber of Commerce, the combined market for medical marijuana and hemp in Thailand will expand by about 15% annually through 2025, when it’s likely to reach US$1.2 billion, creating opportunities for growers and small businesses. Thailand decriminalized cannabis on 09 June to help kickstart the economy, particularly in the agriculture, tourism and wellness sectors. According to the university, cannabis has the potential to become a key economic crop, which can generate a lot of income for both growers and small- and medium-size enterprises. While many people are concerned about the misuse of the drug, they aren’t rejecting legalization due to the economic value. According to a survey carried out by the university, 78% of Thais have yet to try out cannabis.

SINGAPORE
Big Four audit firms dangling higher pay to keep Singapore talent amidst labor shortage
(20 July 2022) The Big Four accounting firms are dangling higher pay to keep Singaporean talent amidst a labor shortage in the country. PricewaterhouseCoopers LLP and Deloitte LLP lifted base salaries starting from 01 July, while Ernst & Young LLP had an off-cycle pay adjustment in April 2022 for some parts of the firm, on top of a special bonus payout in 2021 and the annual salary review in October. KPMG LLP said in May 2022 that it will raise entry-level salaries by as much as 20%, along with providing ‘market-competitive bonuses.’ A departure of expats from the city-state during the pandemic, coupled with stricter rules on bringing in staff from abroad, have led to the worst labor shortage in decades. The average attrition rate among the Big Four firms in Singapore rose to 38% in the 12 months ending 30 September, 2021, compared with 24% in the year-earlier period.

JAPAN
Number of visitors to Japan falls in June 2022 despite borders being partially reopened
(20 July 2022) The number of visitors to Japan fell in June 2022 despite borders being partially reopened to foreign tourists. A total of 120,400 visitors entered Japan in June 2022 after tourists were allowed back into the nation on group tours after a two-year hiatus, according to data by the Japan National Tourism Organization. That’s down 18% from May and 14% from April. In June, Japan doubled its daily cap on entrants to 20,000 and began accepting tour groups from nations and regions classified as having a low number of positive COVID-19 cases. A total of 507,600 foreign travelers entered Japan in the first half of 2022, barely 3% of the total from the first half of 2019. The nation had a record 31.8 million arrivals in 2019.

SOUTH KOREA
Producer prices accelerate in June 2022, underscoring inflation challenge
(22 July 2022) Producer prices accelerated in June 2022, underscoring the challenge of reining in inflation at a time of high commodity prices and supply chain disruptions. According to data by the Bank of Korea, the price index climbed 9.9% year-on-year, compared with 9.7% in May. Services and industrial products were among the largest contributors to the increase. Consumer price inflation is currently standing at a near 23 year high in South Korea, with rising manufacturing costs being a key factor behind this. Earlier in June, the central bank executed a half-percentage-point interest-rate hike for the first time. COVID-19-related lockdowns, the war in Ukraine, and labor strikes have added to the difficulties of controlling manufacturing costs.

NEW ZEALAND
Government creates new investor migrant visa to attract experienced, high-value investors
(20 July 2022) The New Zealand government has created a new investor migrant visa to attract experienced, high-quality investors to invest in domestic businesses. Dubbed the Active Investor Plus visa, it replaces the old investment visa categories and would require migrants to make investments in New Zealand businesses. According to the Economic and Regional Development Minister, the original visa had often resulted in migrants investing in shares and bonds rather than businesses directly. The new visa hopes to create more active investment into the country, thereby generating more high-skilled jobs and economic growth compared to passive investment. The eligibility requirement for the new visa includes a minimum US$3.1 million investment and only 50% of that can be invested in listed equities.