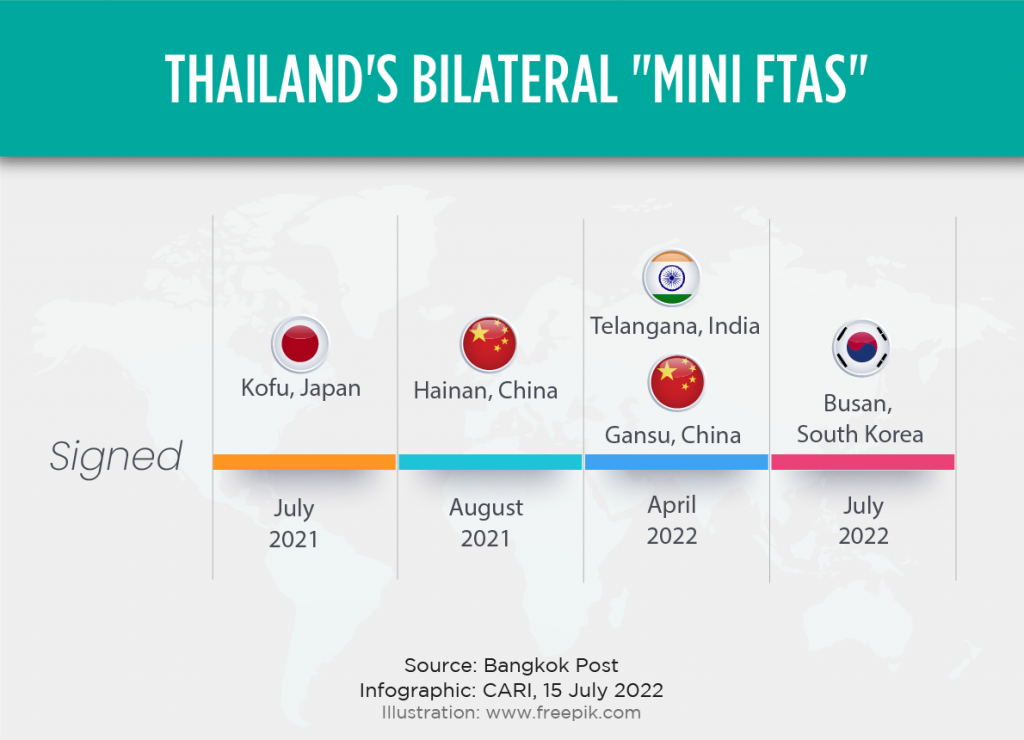 THAILAND, SOUTH KOREA
Thailand establishes mini-FTA with Busan
(14 July 2022) Thailand has entered a “mini free trade agreement” or mini-FTA with Busan to boost trade between the parties. The agreement, signed by the Thai Commerce Ministry and the Busan Economic Promotion Agency, is the first mini-FTA Thailand has entered into with a South Korean city and its fourth mini-FTA. The first four agreements of its kind were with Japan’s Kofu city, China’s Hainan and Gansu provinces, and India’s Telangana state. Busan is both South Korea’s second-largest city after Seoul and the city which handles the largest amount of Thai imports. Trade between the two countries reached US$15.5 billion.

VIETNAM, UNITED KINGDOM
UK exports to Vietnam grow by over 23% in 2021
(10 July 2022) Trade between Vietnam and the United Kingdom returned to pre-pandemic levels last year and rose 17% year-on-year totalling US$6.6 billion. Vietnam’s exports to the UK grew by 16.4% on the year to US$5.7 billion, while its imports from the UK grew by 23.6% to some US$850 million. Furthermore, the country has exported US$2.9 billion worth of commodities to the UK and imported US$372.5 million of the same during the first half of 2022. The Vietnamese government has attributed the quick recovery and growth despite the pandemic to the UK-Vietnam Free Trade Agreement (UKVFTA) which came into force in May 2021.

SINGAPORE, INDONESIA
Indonesia commences chicken exports to Singapore
(13 July 2022) Indonesia began exporting chicken to Singapore for the first time on July 13 through a business-to-business agreement between Charoen Pokphand Indonesia (CPI) and a Singaporean importer. The shipment contained 50 tonnes of frozen chicken, with a contract in place for CPI to supply 1,000 tonnes in total this year. Three Indonesian suppliers have been authorised to export chicken meat and related products to Singapore so far, with 12 other applications being reviewed. Two approved companies are Indonesian subsidiaries of Thailand’s Charoen Pokphand, while the third is a subsidiary of Indonesian agri-food conglomerate Japfa Comfeed.

THE PHILIPPINES
Philippine central bank hikes interest rates by 75 basis points
(14 July 2022) The Philippines’ central bank announced this week that it has raised key interest rates by 75 basis points in a surprise off-cycle move. The key overnight reverse repurchase facility rate rose to 3.25%, the overnight deposit rate rose to 2.75%, and the lending facility rate rose to 3.75%. The announcement came as a surprise since the central bank was not scheduled to have a regular policy meeting until mid-August. The country’s finance minister said that the economy was robust enough to absorb the latest hike, while the central bank governor said that they were ready to take further action to tighten monetary policy.

SINGAPORE
Singapore tightens monetary policy to slow inflation
(14 July 2022) Singapore’s central bank tightened its monetary policy this week to temper rising inflation and re-centre the Singapore dollar. The off-cycle move, which was made to address inflation arising from rising commodity prices and the Russia-Ukraine conflict, came as a surprise as it fell outside of the central bank’s normal cycle of monetary policy reviews typically done in April and October. The central bank also expects core inflation to breach 4% in the near term and come in between 3-4% in 2022, with non-cooked food prices expected to rise sharply.

SINGAPORE
Singapore’s economy grows 4.8% in Q2
(14 July 2022) The Singaporean economy expanded by 4.8% on the year in the second quarter of the year, according to early government estimates, though the country’s gross domestic product (GDP) remained unchanged on a quarter-on-quarter basis. The expansion was driven by continued growth in the manufacturing sector, particularly in electronics and precision engineering due to global demand for semiconductors and semiconductor equipment. Construction activity also picked up in the second quarter as it grew by 3.8%, up from 1.8% in the first quarter, though output remains below pre-pandemic levels due to labour shortages.

CAMBODIA
Tourism expected to reach pre-pandemic levels in 2026
(14 July 2022) The Cambodian government expects tourism to return to pre-pandemic levels in 2026 or 2027 as factors such as economic crises, China’s zero-COVID policy, and the Russia-Ukraine war continue to impede the sector’s recovery. Furthermore, the government expects regional competition and changes in tourist behaviour to affect growth in the tourism sector. The country expects inflows of around one million international visitors in 2022 and double that in 2023 when the country hosts the SEA Games. Cambodia received 6.6 million international tourists in 2019, 1.3 million in 2020 and 0.19 million in 2021.

AUSTRALIA
Australia’s unemployment dives to a 48-year low
(14 July 2022) The unemployment rate in Australia fell to 3.5% in June from 3.9% the month before — its lowest unemployment rate since August 1974. Net employment reached 88,400 in June, up from 60,600 in May, bringing the total for the year so far to 438,000. The country’s underutilisation rate remained at its lowest since 1982 at 9.6%, while the number of unemployed fell by 54,300. Nevertheless, analysts also expect inflation to hit its highest since 1990 this year at around 6.3% especially with pandemic-related restrictions fully lifted.

SOUTH KOREA
Hyundai Motor to build its first South Korean EV factory
(12 July 2022) Hyundai Motor announced that it will build a factory dedicated to producing electric vehicles in South Korea — its first automobile plant in the country in almost three decades. The company also said that it has reached a tentative wage deal with its local labour union to avoid a strike for the fourth consecutive year. Hyundai Motor has also agreed to increase its investment in South Korea and committed to investing US$48.1 billion in the country through 2025. The company will also increase workers’ basic monthly wages by US$74.93, and give them each a one-off bonus as well as 20 shares.

JAPAN
Japan’s JERA to start a new coal-fired power plant
(14 July 2022) Japan’s largest power generation company JERA will be firing up a new 1.07-gigawatt coal-fired power plant in Taketoyo next month to help ease the electricity crunch before winter. The new plant is a rare development, especially in developed countries, since most are phasing out coal plants. Japan’s environment minister called for the plan to be reconsidered but it was eventually approved due to energy security risks that the country faces. JERA says that the plant has achieved the highest levels of generation efficiency for coal power in the world and that it is considering various options to further reduce emissions.