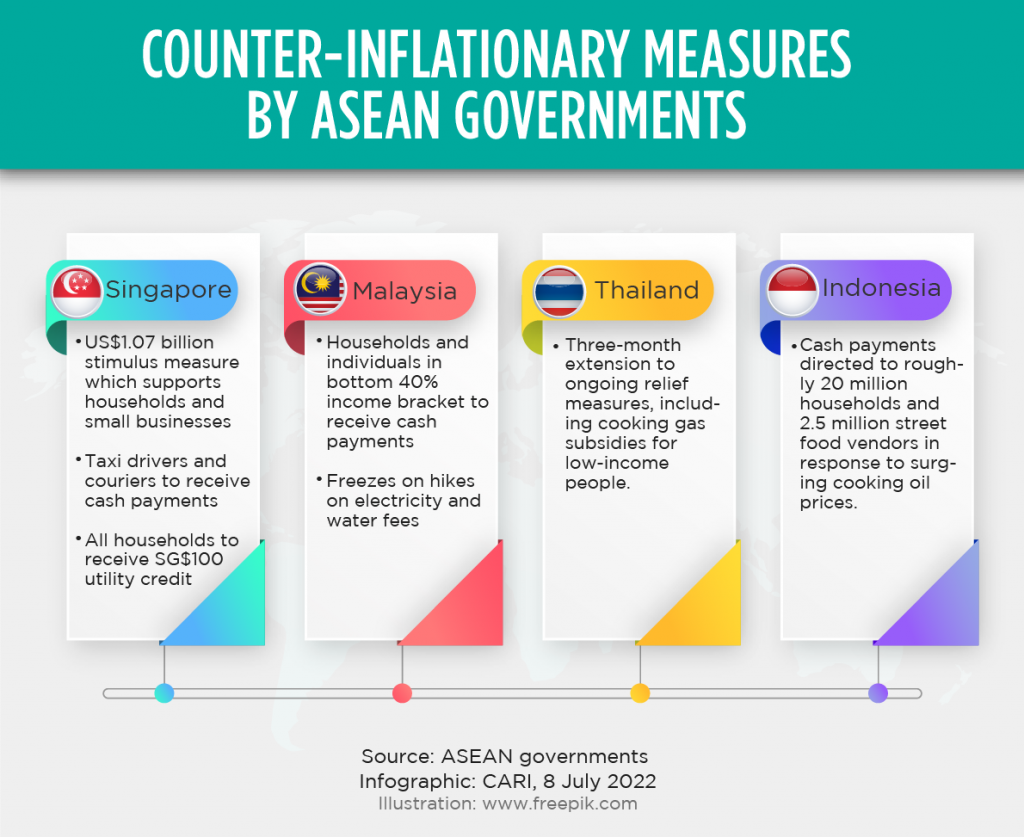 ASEAN
ASEAN governments roll out new economic relief packages to help cushion impact of inflation
(06 July 2022) Southeast Asian governments are rolling out new economic relief packages to help cushion the impact of inflation for lower income citizens. Across the region, people are struggling with the rising prices of everyday goods due to the fallout from the Ukraine war as well as ongoing supply chain disruptions. Singapore has announced a stimulus measure worth US$1.07 billion that assists households and small businesses. In Malaysia, the government has announced that households and individuals in the bottom 40 income bracket will receive cash payments. Meanwhile, the Thai government announced a three month extension to ongoing relief measures, which will now run until September, while Indonesia is directing cash payments to roughly 20 million households and 2.5 million street food vendors in response to surging cooking oil prices. The additional relief packages risk damaging national finances already strained by the pandemic response. Rising interest rates are expected to increase the fiscal burdens of ASEAN governments.

MALAYSIA
Central bank raises overnight policy rate by 25 basis points in response to inflationary pressures
(06 July 2022) Malaysia’s central bank raised its overnight policy rate (OPR) by 25 basis points on 06 July 2022, raising it to 2.25%. This came in response to rising food and energy prices. In May 2022, the central bank raised the OPR to 2% from 1.75%, reportedly the lowest on record, following a 25 basis points cut in July 2020 in response to the COVID-19 pandemic. Malaysia’s central bank noted in a statement that while Malaysia’s economy has benefited from the reopening of the global economy and an improvement in labor market conditions, these have been offset by the impact of rising cost pressures, the conflict in Ukraine, as well as containment measures being implemented in China. The central bank noted that inflationary pressures have continued to increase due to elevated commodity prices as well as strong demand conditions. The central bank also observed that economic activity in Malaysia has strengthened in recent months as reflected in the momentum in exports as well as retail spending.

INDONESIA
Indonesia considering more frequent setting of crude palm oil reference price
(06 July 2022) The Indonesian government is considering setting its crude palm oil (CPO) export reference price every two weeks instead of monthly, in order to adjust quicker to fast-changing international market prices. The current monthly reference price is based on Indonesian, Malaysian and European CPO prices. That price is used to determine the palm oil export tax and levy each month. Malaysia’s benchmark palm oil futures fell 22% in June 2022 and have slumped more than 20% so far in July, a result of Indonesia boosting exports and expectations of Malaysian production increasing, while global demand is sluggish amid concerns of a looming recession. The Indonesian Trade Ministry did not provide a time frame for when a decision would be made, but is currently collecting feedback from stakeholders, government bodies, and industry players.

THAILAND
Thailand pledges to finish high-speed rail link to China by 2028
(06 July 2022) The Thai government has pledged to finish its part of a much-delayed high-speed rail system linking the country to China through Laos by 2028. Thailand pledged to finish the first of two stages to the US$12 billion project by 2026. In total, Thailand’s part of the rail link will comprise 609 kilometers going from Bangkok to the northeastern border province of Nong Khai, where a bridge will be built over the Mekong River to connect with the China-Laos line. The project is part of China’s Belt and Road Initiative (BRI), and was first conceived in 2014. However, it has been delayed due to ‘procedural steps’, according to the director-general at the Department of East Asian Affairs at Thailand’s Ministry of Foreign Affairs. Thailand has completed 12% of the first stage of the project thus far, and expects a test run by 2026 and the official launch the following year. The Chinese foreign ministry has claimed the ‘economic corridor’ connecting China, Laos, and Thailand will promote logistics, trade, and economic development.

VIET NAM, SOUTH KOREA
South Korea and Viet Nam pledge to increase value of bilateral trade to US$100 billion by 2023
(06 July 2022) Viet Nam and South Korea pledged to increase the value of bilateral trade to US$100 billion by 2023, and to US$150 billion by 2030, up from US$78 billion in 2021. The trade targets were agreed during a telephone call between South Korean Prime Minister Han Duck-soo and his Vietnamese counterpart Pham Minh Chinh on 05 July. South Korea is an important economic partner for Viet Nam, representing the largest source of foreign direct investment into the country. Samsung Electronics, for instance, is the biggest single foreign investor in the country. Viet Nam recorded a trade deficit of US$34 billion with South Korea in 2021, according to Vietnamese customs data. Viet Nam’s main imports from South Korea include electronics, machinery, metals, plastics, fabrics and fuels.

BRUNEI DARUSSALAM, OMAN
Oman and Brunei Darussalam explore bilateral business and investment opportunities
(06 July 2022) Oman and Brunei Darussalam explored bilateral business and investment opportunities during an event organized by the Omani Embassy in Brunei Darussalam in conjunction with the University of Brunei Darussalam (UBM). The event, which coincides with the 3rd meeting of the joint Oman-Brunei Committee, included seminars on investment and education. A heritage and tourism exhibition was also held on the sidelines of the event. The event comes within the framework of efforts by the Omani Embassy in Brunei Darussalem to intensify communication between both countries’ public and private establishments. The event also highlighted the various investments made by the Oman-Brunei Investment Company, which has a total capital of US$200 million invested in diverse sectors including aviation, healthcare, tourism, hospitality, industry, communications and education.

JAPAN
Japan’s economic recovery facing headwinds due to sticky inflation
(07 July 2022) Japan’s economic recovery is expected to face headwinds due to sticky inflation. According to the median forecast by economists surveyed by Bloomberg from 01 – 06 July, Japan is expected to post an annualized 3.4% expansion in the quarter through June 2022 from the previous period. That’s down from the 4% growth expected in the previous survey. The recovery is expected to continue slowing down from there, with a 1% increase projected in the second quarter of 2023. The weaker outlook for Japan’s recovery reflects concerns of a global slowdown, as well as sticky inflation. Consumer prices excluding fresh food are expected to stay at or above 2%, the central bank’s target, through the first quarter of 2023. Japan’s economy contracted in the first quarter of 2022, mainly due to COVID-19-related restrictions on businesses. Consumption is expected to drive a rebound in the second quarter.

SOUTH KOREA
South Korea’s inflation rate reaches near-24 year high in June 2022 due to soaring food and energy prices
(05 July 2022) South Korea’s inflation rate reached a near-24 year high in June 2022, due in large part to rising food and energy prices. Data from Statistics Korea noted that South Korea’s consumer price index (CPI) rose 6% in June, the highest level since November 1998 during the Asian financial crisis. The CPI rose in almost every sector, with petroleum products jumping 39.6% and restaurants climbing 8%. The government body noted that soaring oil and energy prices have affected industrial products and groceries. Economists predict that inflation will remain high in the months ahead as energy and food prices remain elevated. South Korea’s central bank is expected to raise its key interest rate at the central bank’s meeting next week, following a quarter-percentage-point hike to 1.75% in May. It is unknown however how much the bank intends to raise its rates.

AUSTRALIA
Australia’s trade surplus rises to record high in May 2022 due to coal exports and tourism
(07 July 2022) Australia’s trade surplus rose to a record high in May 2022 due to stronger prices for its key export – coal – as well as a rebounding tourism sector. According to data by the Australian Bureau of Statistics, Australia’s surplus widened to US$10.9 billion, with exports jumping by 9.5%, Meanwhile, imports climbed 5.8%. Earnings from coal exports rose by 20%, boosting overall resources export receipts by 12% with gains also seen in gold, liquefied natural gas and iron ore. Meanwhile, tourists helped push up services exports. These figures suggested that exports propped up Australia’s economic growth in the second quarter of 2022. The country’s fiscal position has also reportedly improved, with the deficit for the year to May 2022 now standing at $A33.4 billion, which is $A27.1 billion below a previous estimate made in March.