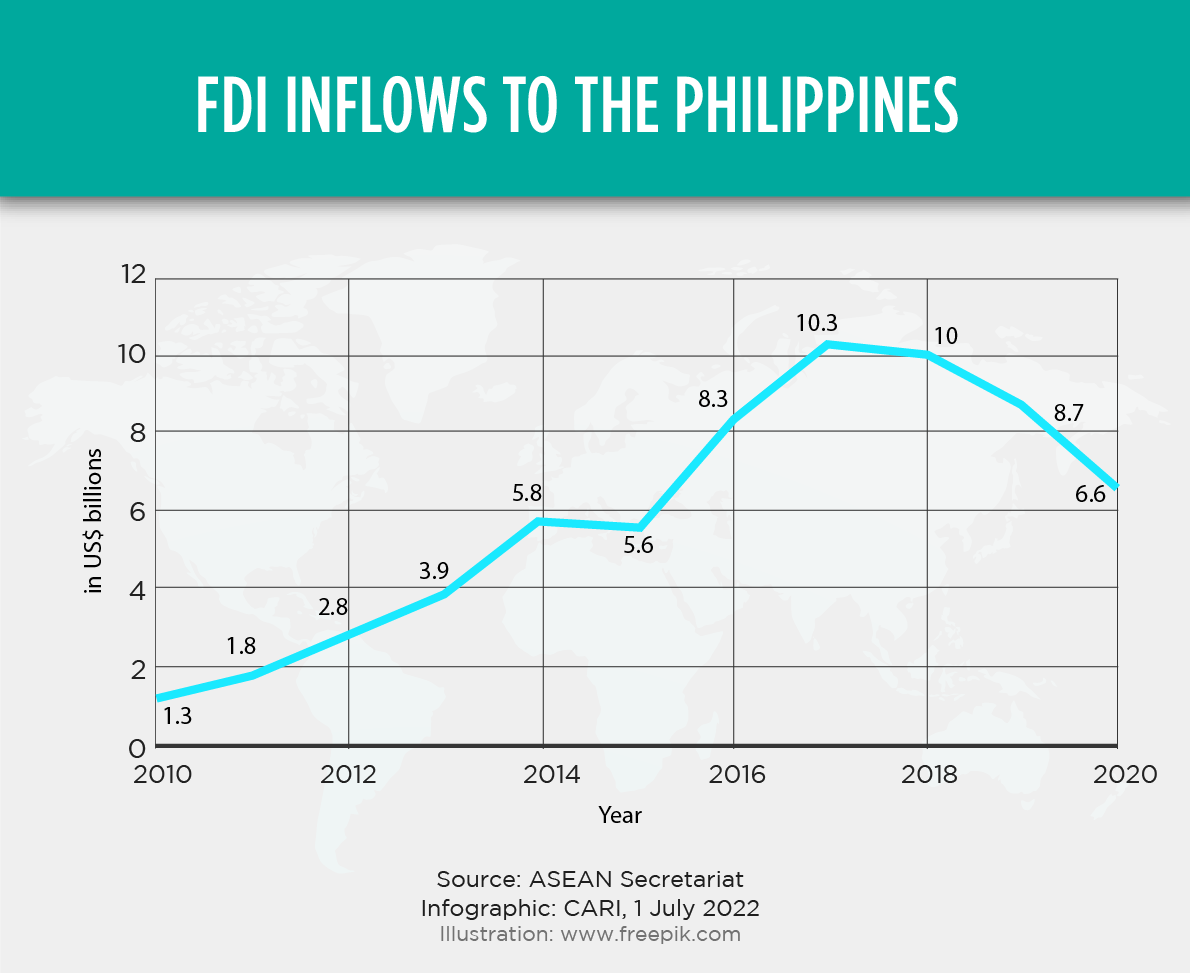 THE PHILIPPINES
Ferdinand Marcos Jr begins six-year presidency
(30 June 2022) Ferdinand Marcos Jr was sworn in as the 17th President of the Philippines on June 30, succeeding Rodrigo Duterte. Marcos Jr’s key economic drivers include his predecessor’s “Build, Build, Build” infrastructure programme, “clean mining” to exploit the country’s untapped mineral resources, and fiscal consolidation. He has also appointed himself agriculture minister as the first step towards fulfilling his campaign promise to lower rice prices by half and prioritise food security. Marcos Jr’s economic team will be headed by finance minister Benjamin Diokno, who was previously the central bank governor.

THE PHILIPPINES
Government updates foreign investment negative list
(28 June 2022) The Philippines government updated its foreign investment negative list this week to amend the areas where foreign ownership is barred or limited. While the updated list largely mirrored the previous list issued in 2018, this year’s Regular Foreign Investment Negative List (RFINL) mirrors the Duterte administration’s previous liberalisation efforts. Notable revisions include reducing the minimum paid-up capital requirements for foreign-owned retail enterprises to US$500,000, and lowering the required minimum paid-up capital for foreign enterprises involved in advanced technology and who employ at least 15 Filipino employees to US$100,000.

THE PHILIPPINES
Government to relax poultry import bans to contain prices
(28 June 2022) The Philippines’ agriculture ministry plans to relax import bans on poultry products to curb rising prices and meet domestic demands for such products. The ministry says it has also issued special import permits for poultry vaccines, is studying alternative sources of feed ingredients from abroad, and will soon allow poultry product imports from Belgium, Spain, Denmark and the Czech Republic. The country has seen reduced poultry output in recent years as local producers have shifted to producing other types of products to avoid rising feed costs and diseases such as the African Swine Fever.

VIETNAM
Vietnam grows at the fastest pace in 11 years in 2Q22
(29 June 2022) Vietnam’s GDP recorded 7.7% year-on-year growth in the second quarter of 2022, its best performance since 2011, as exports recovered and pandemic restrictions were lifted. Export revenue grew 21% year-on-year from April to June, totalling US$96.8 billion, while economic growth from January to June came in at 6.4%. The government is aiming for 6.5% GDP growth in 2022 as the country inches back towards the 7% growth it enjoyed before the pandemic started. However, Vietnam’s consumer price index also rose by 2.96% during the quarter due to increasing oil and import prices.

MALAYSIA
Digi and Celcom get the green light for the merger
(29 June 2022) The Malaysian government has approved the proposed merger between Telenor’s Digi.Com Berhad and Celcom Axiata Berhad to form Celcom Digi Berhad, a new entity that will be the largest player in Southeast Asia’s telecommunications sector. The new entity is projected to generate annual revenue of around US$3 billion and core profitability of US$1.4 billion, with a combined subscriber base of some 19 million customers. The merger is expected to be finalised in the second half of 2022, after which Axiata and Telenor will each hold a 33.1% stake in the new entity.

MALAYSIA
Malaysia sets a higher price ceiling for chickens
(29 June 2022) Malaysia has raised its ceiling price for standard chickens by 50 cents from US$2.02 (RM8.90) per kilogramme to US$2.13 (RM9.40) per kilogramme, as well as the maximum retail price for chicken eggs. The announcement comes as the government reverses its earlier decision to lift ceiling prices and allow the prices of chicken and chicken products to float. The government is said to have allocated US$84 million to subsidise chicken and egg prices, in addition to a similar amount allocated for cash aid for 8.6 million citizens, and US$1.3 billion for water and electricity subsidies.

SINGAPORE, INDONESIA
Singapore approves Indonesia as a new source of chicken imports
(30 June 2022) Singapore’s food agency has added Indonesia to its list of approved countries for chilled, frozen and processed chicken imports. The move comes after neighbouring Malaysia—which Singapore relies on for one-third of its chicken supply—imposed a ban on broiler chicken exports in June. The agency has inspected Indonesia’s food safety and animal health systems, though individual establishments and farms will still need to be evaluated and approved before import. Indonesia produces some 60 million chickens weekly and currently has a 15-20% surplus after domestic consumption.

CHINA
China relaxes travel restrictions and controls
(28 June 2022) China has eased pandemic movement controls for both international and domestic travellers. Overseas arrivals will only need to quarantine at a facility for seven days plus another three days at home upon arrival, down from the previous 14-21 day centralised quarantine requirement. Close contacts of confirmed COVID-19 cases will only need to be quarantined at a facility for seven days, followed by three days at home. Furthermore, the country’s digital travel passes will no longer indicate if an individual had recently visited a city with high COVID-19 risks.

JAPAN
Japan’s May factory output suffered the biggest slump in two years
(30 June 2022) Factory output in Japan recorded a 7.2% drop in May 2022—its biggest monthly decline in two years since the 10.5% month-on-month drop recorded in May 2020. The slump was attributed mainly to parts shortages caused by pandemic lockdowns in China, rising energy and raw material prices, and other supply chain disruptions. Semiconductor shortages persist, resulting in a notable drop in vehicles, electric and other machinery production. For instance, Toyota Motor Corp said it produced only 634,940 vehicles in May, missing its already-downgraded target of 700,000 vehicles for the month.

SOUTH KOREA
South Korea to raise the minimum wage by 5% next year
(30 June 2022) South Korea’s Minimum Wage Commission has agreed to up the minimum hourly wage by 5% from US$7.06 to US$7.41, effective 1 January 2023. The increase, which will apply to all sectors, would translate to a monthly wage of around US$1,555. Nevertheless, negotiators representing labour were not satisfied with the outcome as they had hoped for an increase to US$7.70 per hour as promised by the previous Moon Jae-in administration, while those representing business wanted a freeze on wage increases as they were still reeling from the impact of the pandemic. The government had previously increased the minimum wage by 1.5% in 2021, 2.9% in 2020, 10.9% in 2019, and 16.4% in 2018.