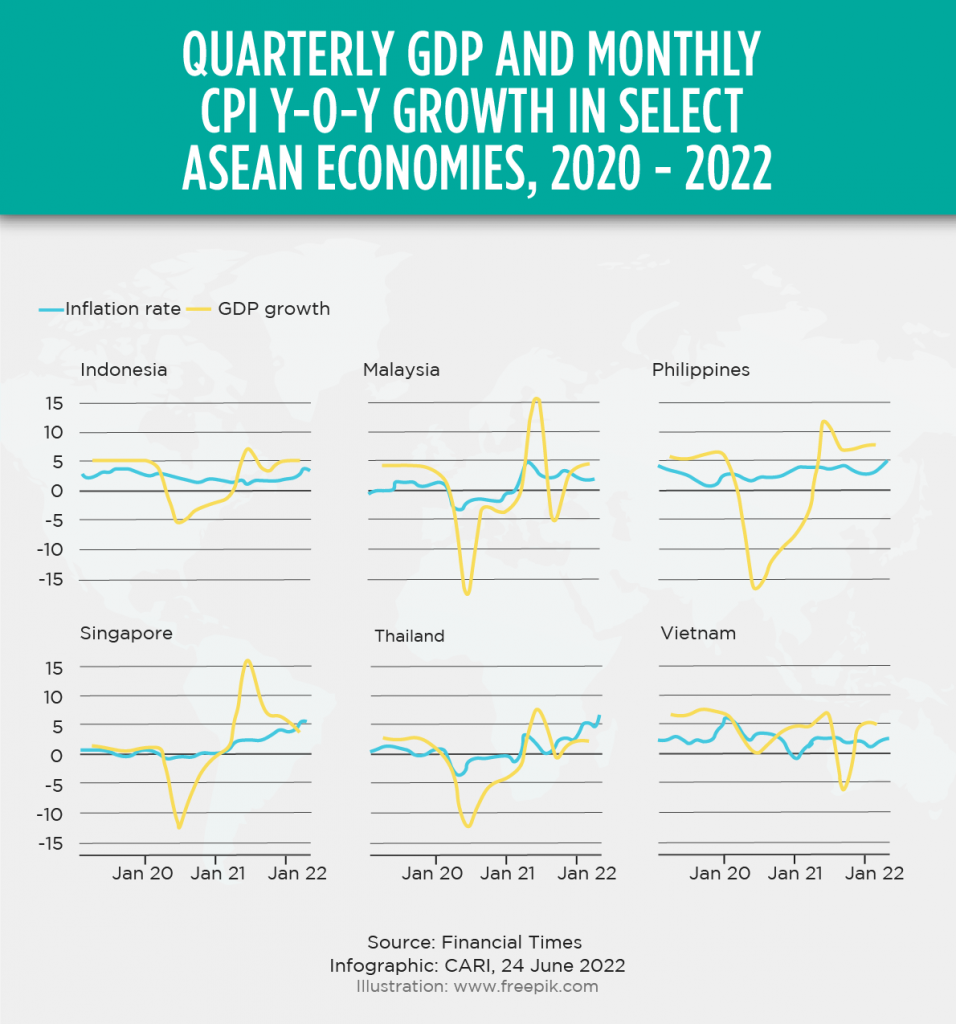 ASEAN
Major ASEAN economies expected to buck stagflationary trend due to loosening restrictions and rebounding tourism
(21 June 2022) According to analysis by the Financial Times, four out of the six largest economies in Southeast Asia are expected to buck the expected global stagflationary trend, with their GDP rising faster than inflation. The four said ASEAN countries include Viet Nam, Malaysia, Indonesia, and the Philippines, with their economies bouncing back due to a loosening of COVID-19 related restrictions as well as a resurgence in tourism. Only in Thailand and Singapore have inflation climbed faster than GDP growth. While these positive numbers reflect the base effect of bouncing back from a deep economic downturn during the pandemic, many Southeast Asian economies are also generating greater momentum in output too, including a steady growth in exports. High fuel, food, and commodity prices have been beneficial for certain economies such as Malaysia, Indonesia, and Thailand. These economies are also expected to benefit from manufacturing shifting away from China.

THE PHILIPPINES
The Philippines’ central bank raises key interest rate to 2.5% to temper accelerating inflation
(23 June 2022) The Philippines’ central bank raised its key interest rate to 2.5% to temper accelerating inflation, its second rate hike in two months. The central bank last raised its rate by 25 basis points in May 2022, the first since 2018. The latest rate hike comes as inflation, which averaged at 4.1% between January and May 2022, is expected to climb further. The central bank’s governor attributed this to rising transport fares amid higher oil prices, as well as a domestic fish shortage. The Philippine central bank now expects inflation to hit 5% in 2022 and 4.2% in 2023, breaching its 2% to 4% target. The Philippines’ peso has declined to its weakest level in 16 years against the US dollar. The bank has signaled a gradual tightening, with possibly another rate increase by the next meeting in August 2022.

MALAYSIA
Malaysia-based direct-to-consumer startup RPG Commerce raised US$29 million
(23 June 2022) Malaysia-based direct-to-consumer e-commerce startup RPG Commerce raised US$29 million in a Series B funding round. The second funding round is aimed at expanding its brand portfolio and boosting its technology and development. The Series B round was reportedly co-anchored by East Ventures, UOB Venture Management, Vertex Ventures SE Asia & India (VVSEAI) and RHL Ventures. RPG Commerce describes itself as a multibrand DTC company that launches and operates a suite of DTC brands via a “shared back-end infrastructure” approach. RPG Commerce said it owns the development, production and delivery processes of its DTC brands in an end-to-end process. The company has employees in Malaysia, Singapore, and the Philippines, and sells its products to developed markets like the US, Europe, and Australia.

SINGAPORE
Core inflation in May recorded at 3.6% year-on-year, hitting highest level in more than 13 years
(23 June 2022) Singapore’s core inflation was recorded at 3.6% year-on-year in May 2022, hitting its highest level in more than 13 years. The rise in core inflation, which does not include accommodation and private transport costs, was led by rising food and utility prices. The last time Singapore reported higher year-on-year core inflation was in December 2008, when it was recorded at 4.2%. The headline consumer price index, or overall inflation, rose to 5.6% year-on-year in May, exceeding the 5.4% reported in both April and March 2022. Authorities stated that external inflationary pressures continued to be strong amidst high commodity prices as well as supply chain disruptions caused by the war in Ukraine and the regional COVID-19 situation. In response to the rising cost of living, on 21 June the Singaporean government announced a SGD 1.5 billion support package targeted at providing immediate relief for lower-income and more vulnerable groups.

MALAYSIA
Government announces US$143 million cash aid for low income families in response to rising cost of living
(22 June 2022) On 22 June, the Malaysian government announced a US$143 million additional cash aid to lower income Malaysians to help them cope with the rising cost of living. Prime Minister Ismail Sabri announced that an additional US$143 million would be distributed together with the second phase of aid payments under the “Bantuan Keluarga Malaysia” (BKM) assistance package for Malaysia’s “Bottom 40” (B40) economic group. BKM is a direct cash aid initiative originally announced in Malaysia’s 2022 Budget and intended to benefit 8.6 million low income Malaysians. Originally, the financial allocation for the second phase of the BKM initiative was US$252 million. Beginning from 27 June, the additional cash aid is expected to reach some 4 million households. The government also announced on 21 June that price ceiling controls for chicken and chicken eggs will be discontinued from 1 June, while subsidies for certain cooking oil products will be abolished from 1 July.

THAILAND, UNITED KINGDOM
Thailand and the UK agree to bring bilateral trade back to US$7 billion
(23 June 2022) Thailand and the United Kingdom agreed to bring bilateral trade back to US$7 billion. Thailand’s Commerce Minister stated this after a Joint Economic and Trade Committee ministerial meeting held at Central Hall Westminster, London. Both countries agreed to cooperate in six areas to boost trade, including in agriculture, digital technology, foods and beverages, investment, commerce and finance. Bilateral trade between both nations currently stands at US$5.5 billion, with the UK standing as Thailand’s 22nd largest trade partner globally and fourth largest within Europe. Thailand intends to boost its economic relationship with the UK in the long term, moving from a joint trade committee to an enhanced trade partnership and a free trade area in the future.

VIET NAM, AUSTRALIA
More than hundred businesses from Viet Nam and Australia gather for trade and investment promotion event
(23 June 2022) More than a hundred businesses from Viet Nam and Australia gathered for a trade and investment promotion event organized by the Australia Vietnam Business Council (AVBC) in Sydney, Australia. The AVBC president stated that the Australia-Vietnam Enhanced Economic Engagement Strategy, signed in December 2021, reaffirmed the two countries’ commitment to strengthening ties and sustainable economic development. Both countries have ratified a number of regional and international trade agreements including the Comprehensive and Progressive Agreement for Trans-Pacific Partnership (CPTPP). Both countries’ premiers met on the sidelines of the 2021 United Nations Climate Change Conference, where they reiterated a bilateral goal to strengthen trade and investment, particularly in the fields of energy, agriculture, forestry, seafood, manufacturing, tourism, digital economy and science and technology. In the first five months of 2022, export-import turnover between the two countries reached a record high of US$6.22 billion, a 32.18% increase from the same period in 2021.

JAPAN
Core consumer prices in Japan stays at seven year high in May 2022
(24 June 2022) Core consumer prices in Japan rose by 2.1% year-on-year again in May 2022, the second consecutive month in which inflation stayed at levels not seen since March 2015. The core consumer price index, which excludes fresh food, had also risen by 2.1% in April. These latest figures come after the central bank last week stuck to its loose monetary policy, even as other central banks raise interest rates to tame inflation. The bank has cautioned that the recent rising prices are a temporary and volatile trend, justifying sticking with its policy of monetary easing to achieve more long-lasting rises (and specifically to achieve its long-time target of 2.0% inflation). The central bank did state, however, that it would pay ‘due attention’ to forex markets after the yen hit a 24-year low against the US Dollar.

SOUTH KOREA
South Korean won falls below 1,300 per US Dollar for first time in 13 years
(23 June 2022) South Korea’s won fell below 1,300 per US Dollar for the first time in 13 years, amidst worries of a coming global economic recession and a strengthening US Dollar. The won weakened by as much as 0.42% in onshore spot trade on 23 June to touch the lowest since 14 July, 2009, at 1,302.8 per dollar. Falling below the 1,300 mark was last seen during the 2008-2009 Global Financial Crisis and the 1997-1998 Asian financial crisis, and has long been considered as a sign of major economic risks. The won has dropped by more than 8% in 2022, after having weakened by 8.6% in 2021, the fastest annual fall since 2008. South Korea has posted an accumulative US$7.83 billion trade deficit from January until May 2022, and should the trend continue, South Korea’s economy will log the first annual deficit since 2008.

CHINA
Chinese housing slump expected to have significant impact on growth in 2022
(23 June 2022) A slump in China’s housing market is expected to have a significant impact on China’s economic growth in 2022, with demand for services and commodities generated by housing construction and sales accounting for about 20% of GDP. An official index that tracks apartments and house sales have posted year-on-year declines for 11 months straight. An economist with Nomura Holdings Inc rated it the ‘worst property downturn on record’, with the length of the drop exceeding those in 2008 and 2014. The housing slump began in 2021 after Beijing took steps to slow the growth of mortgages and funding for property developers as part of an effort to tame housing bubbles. With the government committing to its stance, economists argue it could bring forward the historic peak in property construction and ensure China’s GDP growth rates average less than 4% over the rest of the decade. Lockdown measures implemented in major cities such as Shanghai also closed businesses and caused joblessness to spike, further causing housing sales in major cities to decline by over 40% from the previous May.