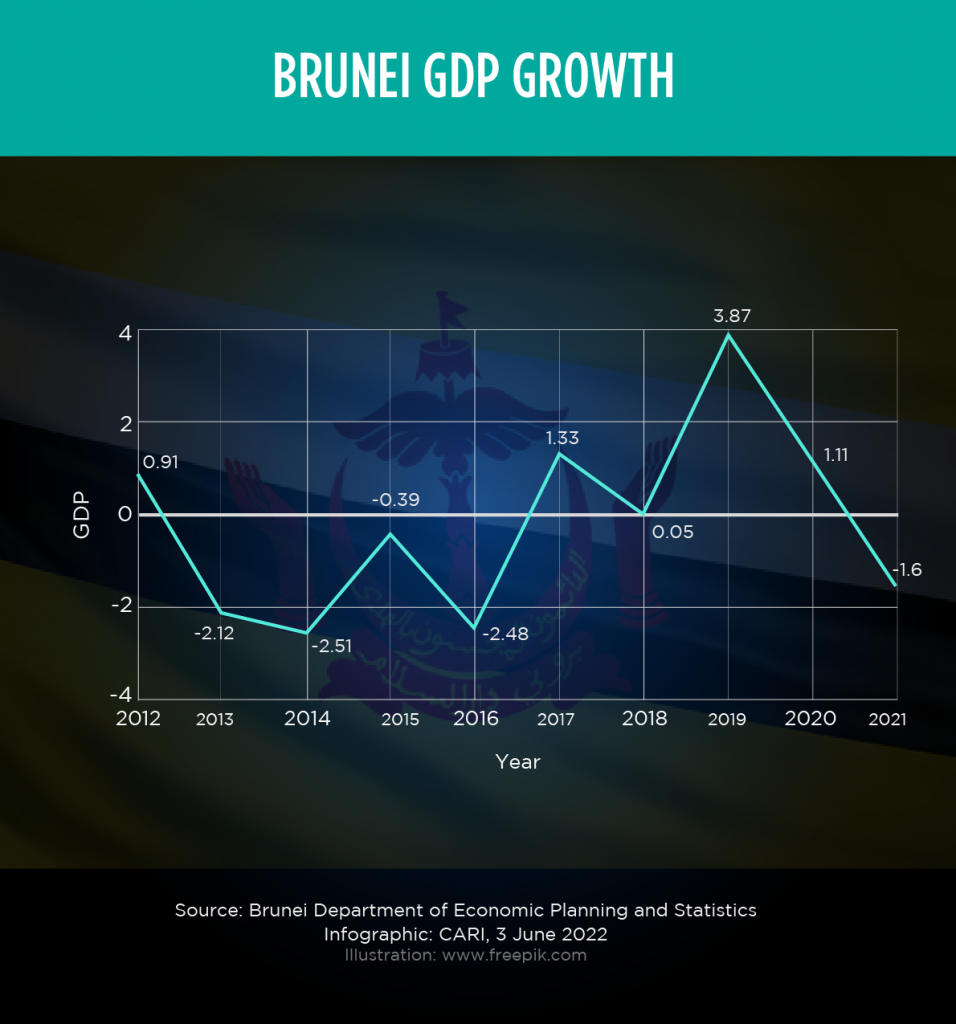 BRUNEI
Brunei’s 2021 GDP falls at fastest pace in five years
(29 May 2022) Brunei’s economy recorded a -1.6% GDP growth rate last year, its biggest decline since the 2016 oil price crash when GDP growth came in at -2.48%. The decline was mainly due to reduced activity in the oil and gas sector caused by manpower shortages and ageing oil and gas fields. Oil and gas contribute to around half of Brunei’s GDP but oil output fell from 105,000 barrels a day in Q4 2020 to 103,400 barrels a day in Q4 2021, following the record low 97,100 barrels a day in Q3 2021 due to COVID-19 related disruptions. Nevertheless, analysts expect Brunei’s economy to recover in 2022 with higher energy prices and the rolling back of pandemic restrictions.

SINGAPORE, INDONESIA
Bilateral merchandise trade rose 21% in 2021
(1 June 2022) Trade in goods between Indonesia and Singapore saw a 21% year-on-year increase last year totalling US$43 billion. Indonesia is Singapore’s sixth-largest trading partner, while Singapore is Indonesia’s top source of foreign direct investment (FDI), a position it has held since 2014. FDI inflows to Indonesia originating from Singapore totalled US$9.3 billion last year, representing 14.9% of Indonesia’s total FDI. The figures were shared by Singapore’s trade and industry minister during his visit to Indonesia this week, during which both sides discussed greater cooperation in energy, infrastructure development and the digital economy.

THAILAND, VIETNAM
Thailand may join with Vietnam to control the rice trade
(27 May 2022) Thai Prime Minister Prayut Chan-o-cha hopes that Thailand and Vietnam can jointly raise the prices of their rice exports to take advantage of global food shortages and rising inflation. Thailand’s rice exports are experiencing a rebound as the global economy reopens, with exports projected to reach eight million tonnes in 2022, up from six million tonnes exported in 2021. Nevertheless, Thailand’s rice exporters say that such an increase would not make sense since global rice supplies remain abundant and rice export prices from India—which accounts for 40% of global supply—hit a five-year low just last week.

THAILAND, INDONESIA
KBank to buy a majority stake in Indonesia’s Bank Maspion
(31 May 2022) Thailand’s Kasikornbank (KBank) has entered a conditional sale and purchase agreement to buy a majority stake in Indonesia’s PT Bank Maspion for around US$220 million. Kbank will own no less than 67.5% of the Indonesian bank when the deal is completed by the end of 2022, up from the 9.99% stake that it acquired in 2017 for US$20 million. The acquisition will enable KBank to conduct commercial banking activities in Indonesia without having to apply for a new licence which requires a minimum capital investment of US$700 million. The bank previously opened its first branch in Vietnam in 2021 and is establishing a presence in Myanmar, Laos and Cambodia.

MALAYSIA
Malaysia to stop subsidising chicken breeders in July
(1 June 2022) The Malaysian government will no longer provide chicken farmers with subsidies beginning July 1 and will instead divert the RM720 million allocated for said subsidies “to the people.” The subsidies were put in place to compensate chicken farmers and traders who complained of slim profit margins due to rising operating costs and the mandated price ceiling of RM8.90 per kg for standard chickens which will be in place until June 5. Only 10% of farmers have claimed the subsidy so far and some traders were still going above the ceiling price despite the subsidy programme.

THE PHILIPPINES
RT-PCR test no longer needed for fully-vaccinated travellers
(27 May 2022) Fully-vaccinated locals and foreigners entering the Philippines will not need to present a negative COVID-19 test upon arrival beginning May 30. This applies to those aged 18 and above with at least one booster shot, those aged 12 to 17 with at least two vaccine shots, and those under 12 years of age accompanied by fully vaccinated adults. Travel insurance is also no longer required though it is still encouraged. Meanwhile, those who do not meet the vaccination requirements will still need to present a negative pre-departure test result and undergo quarantine.

ASEAN
Disney+ Hotstar leads Q1 subscriber growth in Southeast Asia
(31 May 2022) Sign-ups to Disney+ Hotstar accounted for 22% of the new 2.8 million subscription video on demand (SVOD) sign-ups in the first quarter of the year, bringing the aggregate customer base to 39.5 million according to a report which measured consumer consumption in the ASEAN-5. Disney+ Hotstar also became the first service to breach the five million subscriber mark in Indonesia, bringing the country’s SVOD subscriber total to 17.4 million. Korean and western content accounted for 30% and 23% of overall video consumption respectively, though the share of western content consumed in the Philippines, Malaysia and Singapore was notably higher than the regional average.

SOUTH KOREA
South Korea rolls out measures to tame inflation
(30 May 2022) The South Korean government announced a slew of measures to lower the cost of living this week. This included (i) lifting import tariffs on seven key food ingredients such as pork, cooking oil, flour, and processed eggs, (ii) lowering value-added taxes on coffee and cocoa beans, and lifting value-added taxes on packaged processed food such as kimchi until 2023, as well as (iii) extending the 30% reduction in consumption tax on passenger cars until the end of the year. The measures are expected to see tax revenue fall by some US$477 million.

JAPAN
99.9% of households to have fibre optic networks by 2028
(1 June 2022) Prime Minister Fumio Kishida aims to cover 99.9% of Japanese households with high-speed fibre optic networks by 2028 and 5G wireless networks by 2030 as part of his vision to grow the country’s economy through digitalisation, according to a government policy shared this week. The government also aims to increase the number of citizens with digital expertise, such as in data science, from the current one million to over three million by 2026. The Kishida administration is banking on digitalisation to help drive the economy and solve challenges such as its ageing population and depopulation in rural areas.