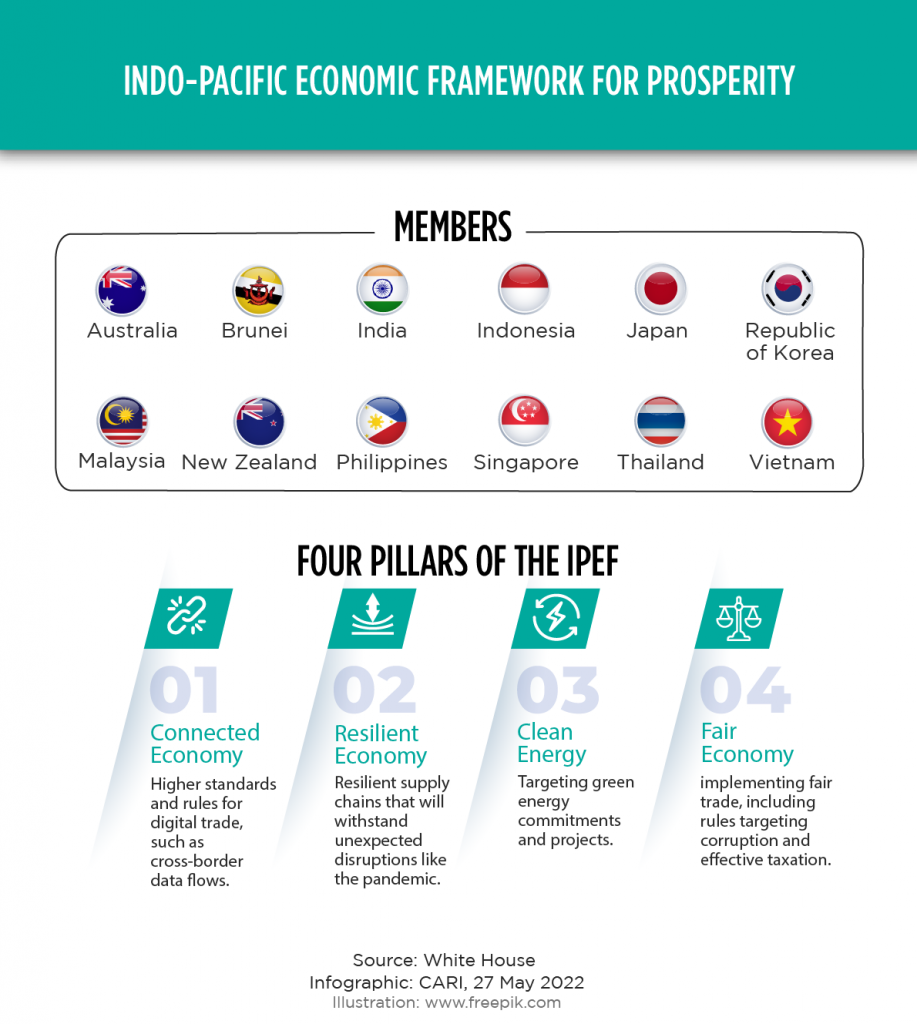 ASEAN, UNITED STATES
Biden administration launches Indo-Pacific Economic Framework for Prosperity with several ASEAN countries
(25 May 2022) The Biden administration launched the Indo-Pacific Economic Framework for Prosperity (IPEF) on 23 May 2022 during a visit to Tokyo, Japan. IPEF involves 12 countries, including the ASEAN Member States of Brunei, Indonesia, Malaysia, the Philippines, Singapore, Thailand, and Viet Nam. IPEF is a US-led framework for participating countries to solidify their relationships and engage in crucial economic and trade matters that concern the region, such as building resilient supply chains affected by the pandemic. IPEF is not a free trade agreement similar to Comprehensive and Progressive Trans-Pacific Partnership, as it doesn’t provide market access or tariff reductions. Some experts argue, however, that IPEF may provide the first steps towards a free trade agreement. The combined GDP of the participating countries represents 40% of the global GDP, and 60% of the world’s population. The four pillars of IPEF include connected economy, resilient economy, clean economy, and fair economy.

MALAYSIA, INDONESIA
Malaysia sees sustained competitiveness in palm oil exports even as Indonesia resumes exports
(22 May 2022) Indonesia’s recent decision to resume the export of palm oil on 23 May is not expected to impact the competitiveness of Malaysia’s own palm oil exports. Indonesia is the largest producer of palm oil, with Malaysia second. Global prices of palm oil have hit record highs this year due to the ongoing war in Ukraine affecting the supply of one of them, in this case sunflower oil. After Indonesia banned the export of palm oil on 28 April, India, which traditionally gets two-thirds of its palm oil from Indonesia, was forced to buy more from Malaysia and Thailand, while other frustrated importers have said they would decrease reliance on unpredictable Indonesian suppliers. The Malaysian government does not expect a big downward adjustment to crude palm oil prices following Indonesia's latest policy announcements. The Malaysian government is mulling a temporary cut in the export tax on crude palm oil by as much as half to help fill the global shortage of edible oil and boost Malaysia's market share.

MALAYSIA, SINGAPORE
Malaysia to ban export of chicken from 1 June onwards in order to ensure sufficient domestic supply
(24 May 2022) On 23 May, the Malaysian government announced that it would curb the export of chicken from 1 June onwards, in order to ensure there is sufficient domestic supply amidst rising prices. Rising chicken prices in Malaysia has been attributed to a supply shortage caused by the rising costs of chicken production (namely the rising price of chicken feed), disease infection and weather conditions. Apart from halting the export of up to 3.6 million chickens a month, Malaysia said it will create a buffer stock of chicken and optimize existing cold storage facilities under the Ministry of Agriculture and Food Industries and agencies. Malaysian authorities will also recognize overseas slaughterhouses to increase supply, and recently abolished the approval permit system for importing whole and cut chicken. Malaysia’s export ban is expected to impact Singapore, which imports about 34% of its chicken from Malaysia. There is expected to be an adverse impact on the prices of chicken and related products in Singapore, with some wet market stallholders in Singapore claiming they may have to close temporarily.

THAILAND
Thailand aims to be global hub for electric-vehicle production with Japanese support
(26 May 2022) Thailand’s Prime Minister Prayut Chan-o-cha claimed that Thailand aims to become the world’s largest electric vehicle (EV) production hub through support from Japan. Prime Minister Prayut was speaking at the 27th International Conference on the Future of Asia organized by Nikkei Inc in Tokyo. The Prime Minister claimed that Thailand was employing all its resources to upgrade the country’s basic infrastructure, especially digital technology and transport service development, in order to facilitate foreign investment in the Eastern Economic Corridor, a planned advanced industries hub. Japan is Thailand’s second largest trading partner and top foreign investment, with 5,000 Japanese companies operating in the kingdom. The prime minister called for more Japanese investments into the Eastern Economic Corridor. The renewable energy sector in Japan was identified as one area which could see cooperation between Japanese and Thai private players.

THE PHILIPPINES
Philippines President-elect Ferdinand Marcos Jr. names central bank governor Benjamin Diokno as his finance secretary
(26 May 2022) The Philippines President-elect Ferdinand Marcos Jr. signaled policy continuity by naming central bank governor Benjamin Diokno as his finance secretary. Incumbent monetary board member Felipe Medalla will assume Diokno's post until his term expires in July 2023. Marcos Jr. also named former University of the Philippines President Alfredo Pascual as his trade secretary, and earlier appointed competition commission chairman Arsenio Balisacan as his socioeconomic planning secretary, a post he held under the Benigno Aquino III administration. Marcos noted that his first priority will be the economy, identifying jobs, increasing prices of commodities, and relief for the business community as areas of focus. The Philippines economy grew by 8.3% in the first quarter of 2022, although the recovery faces risks from accelerating inflation, fallout from the Ukraine war, China's economic slowdown and rising interest rates. Marcos also stated that he would review the country's ratification of the Regional Comprehensive Economic Partnership due to concerns about the Philippines’ agricultural sector's competitiveness.

INDONESIA
HSBC considering initial public offering of its Indonesia business to tap into investor demand
(26 May 2022) Multinational banking firm HSBC Holdings Plc is examining an initial public offering (IPO) of its Indonesian business in order to tap into strong investor demand. Although HSBC is yet to file a formal IPO application, plans for a share sale in Jakarta are reportedly at an advanced stage. HSBC is in the midst of shifting its operations to Asia, shifting billions of dollars in capital and making new investments as it sells off and scales back unprofitable businesses in other regions. HSBC’s Indonesian business, which has more than 3,000 employees, booked a profit before tax of about US$129 million in 2021, according to company reports. In 2020, it had a total of 69 branches across 24 cities. The Jakarta Composite Index is the best performing major benchmark in Asia in 2022, up almost 5% this year. Indonesia has seen some of Southeast Asia’s most high profile listings this year, including GoTo Group, the nation’s biggest tech company.

VIET NAM
Viet Nam and UK seek greater trade and investment relations, bilateral trade doubled over last decade
(26 May 2022) At the Vietnam-UK Business Forum held on 25 May in London, both Vietnamese and British officials stated their intentions to bolster the trade and investment relations between both nations. The Forum was organized by the Ministry of Industry and Trade and the Ministry of Agriculture and Rural Development, in collaboration with the UK Department of International Trade (DIT). Participants discussed prospects for trade and investment between the two countries’ enterprises in sectors such as agriculture, education, renewable energy and others. It also provided a platform for Vietnam to introduce its market potential to British investors, and for firms from both sides to share information and seek partnerships in order to take full advantage of the UK-Vietnam Free Trade Agreement (UKVTFA). It was noted that bilateral trade between both nations has doubled over the last decade, and reached US$6.6 billion in 2021, up 17.2% from 2020.

JAPAN
Japan to allow tour groups from 36 countries to enter country from 10 June onwards
(26 May 2022) The Japanese government announced on 26 May that it will allow tour groups from 36 countries to enter Japan starting from 10 June onwards. The government revised border controls to resume accepting package tours from 36 countries and regions where the COVID-19 situation is relatively stable, including countries such as Britain, Spain, Canada, Saudi Arabia, and Malaysia. Japan also intends to expand the number of airports that can accept international flights to seven. Throughout most of the pandemic, Japan has barred all tourists from entering the country. It is unknown how many tourists will be able to enter the country, with a daily cap on people entering Japan to be doubled to 20,000 in June, although tour groups are not expected to be counted in that figure. Prior to the pandemic, Japan welcomed a record 31.9 million foreign visitors in 2019.

SOUTH KOREA
South Korea’s central bank tackles inflation through back-to-back interest rate hikes
(26 May 2022) South Korea’s central bank is seeking to tackle inflation through back-to-back interest rate hikes, with further aggressive increases forecasted. The Bank of Korea (BOK) raised its benchmark policy rate by a quarter of a percentage point to 1.75%, the highest since mid-2019, joining a global wave of monetary tightenings by other central bankers grappling with global spikes in prices. The BOK projects inflation to hit 4.5% in 2022, the highest level since 2008. Back-to-back interest rate rises by the BOK follow more than 100 cumulative basis points of hikes since August 2021, in one of the most forceful tightening campaigns ever by the bank. Analysts expect the BOK to take rates up to 2.25% by end-2022. The BOK expects the economy to expand 2.7% in 2022, down from its earlier forecast of 3% and slowing from an estimated 4% for 2021.