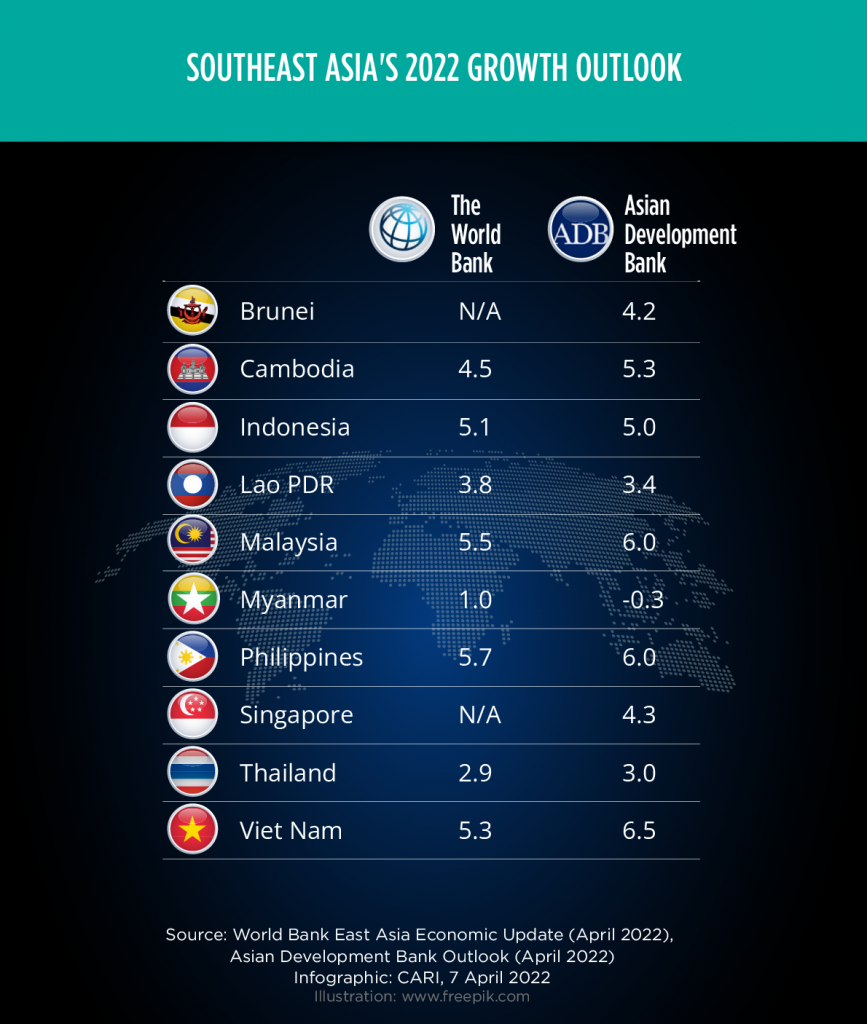 ASEAN
World Bank shaves 2022 growth projections for Southeast Asia
(6 April 2022) The World Bank has downgraded its growth projections for East Asia and the Pacific in 2022 in its latest economic outlook from last October’s 5.4% to 5%, with a worst-case scenario forecast of 4% growth, due to slowing growth in China, monetary tightening in the United States, and the impacts of the war in Ukraine. The report, which does not provide data on Singapore and Brunei, expects to see the most growth in the Philippines this year (5.7%), followed by Malaysia (5.5%), Vietnam (5.3%), Indonesia (5.1%), Cambodia (4.5%) and Laos (3.8%). The World Bank expects Thailand’s growth (2.9%) to be hardest hit due to the COVID-19 situation in China and Russian sanctions affecting pivotal tourist inflows, and Myanmar’s growth to come in at 1% due to its domestic issues.

ASEAN
ADB trims Southeast Asia’s growth outlook in 2022
(6 April 2022) The Asian Development Bank (ADB) has adjusted its full-year growth projection for Southeast Asia (including Timor Leste) from 5.1% to 4.9% due to the Omicron variant’s effect on the region in early 2022, particularly in tourism-reliant Thailand. The ADB also expects the region’s growth to hit 5.2% in 2023, though it noted that downside risks remain and that its projections do not take into account the latest COVID-19 situation in China. Five Southeast Asian countries are expected to outperform the region’s 4.9% growth rate this year: Vietnam (6.5%), Malaysia (6.0%), the Philippines (6.0%), Cambodia (5.3%), and Indonesia (5.0%).

ASEAN
Wall Street says Indonesia is the region’s top market in 2022
(3 April 2022) Analysts from JPMorgan and Goldman Sachs picked Indonesia, Vietnam and Singapore as their Southeast Asian markets of choice for 2022, with Indonesia being the top pick for both banks. Goldman believes that the region’s stocks have largely flown under the radar in the last decade, while JPMorgan feels that the region is relatively insulated from the rising geopolitical tensions in Europe. Among JPMorgan’s reasons for banking on Indonesia is the significant percentage of the country’s population that remains underbanked, the emergence of digital economy firms being listed, and an economy that is set to recover from pandemic-related setbacks and policies.

MALAYSIA, INDONESIA
Bilateral agreement on Indonesian domestic helpers signed
(2 April 2022) Indonesia and Malaysia signed a memorandum of understanding (MoU) on the recruitment and protection of Indonesian domestic helpers in Malaysia on 1 April 2022. The MoU included provisions for implementing a single entry system agreed upon by both countries, an e-wages system to ensure that payments are made before the 7th of each month, and a mandatory induction course to help workers understand their rights and responsibilities. Among other provisions, the MoU also states that domestic helpers will serve a maximum of six people per household, receive Social Security Organisation (SOCSO) contributions, and have access to a mobile application to submit complaints.

THAILAND
Thailand approves enhanced incentives to boost EV use
(7 April 2022) Thailand’s investment board has approved additional incentives to accelerate the expansion of electric vehicle (EV) infrastructure and consumer adoption of EVs to meet its goal of having EVs account for 30% of total automotive production output by 2030. Smaller charging stations will be eligible for three-year tax benefits under the revised incentives, in addition to the existing five-year corporate income tax exemption available to charging stations with at least 40 charges. The board has also scrapped the need for ISO certification, and investors will no longer be barred from receiving benefits from other government agencies.

ASEAN, US
US plans trade meetings with ASEAN as it retools Indo-Pacific strategy
(7 April 2022) The United States is renewing its efforts to engage Southeast Asian countries with several meetings in 2022 and the development of an Indo-Pacific Economic Framework (IPEF) that focuses on trade, supply chain, infrastructure, and clean energy. This includes a summit with ASEAN leaders in the coming months, the planned signing of an agreement on supply chain resilience with Malaysia in May, the US undersecretary of commerce for international trade’s clean energy mission to Indonesia, Vietnam and possibly the Philippines in June, as well as the G20 Leaders’ Summit in Bali in October.

INDONESIA, AUSTRALIA
Australia and Indonesia face limits in coal exports to Europe
(6 April 2022) Coal exporters in Indonesia and Australia say that they will not be able to meet Europe’s coal needs if the European Union (EU) decides to go ahead with its ban on Russian coal imports. EU member states rely on Russia for approximately 45% of their coal imports, and European buyers have been looking for alternative coal sources even before the EU’s proposed ban. Coal output in Indonesia and Australia has been affected by wet weather in recent months, in addition to regulatory restrictions and pandemic-related constraints.

AUSTRALIA
Australia and India sign interim trade deal in a virtual ceremony
(2 April 2022) Australia and India inked an interim bilateral trade agreement last week, with both sides expressing their intention to work towards a full free trade agreement. The new deal will see India removing tariffs on 85% of its imports from Australia — said to be worth around US$9.4 billion — and cover almost 91% of imports in a decade. This includes tariffs on copper, coal, alumina, wool, and some critical minerals and non-ferrous metals. At the same time, Australia will remove tariffs on 96% of its imports from India.