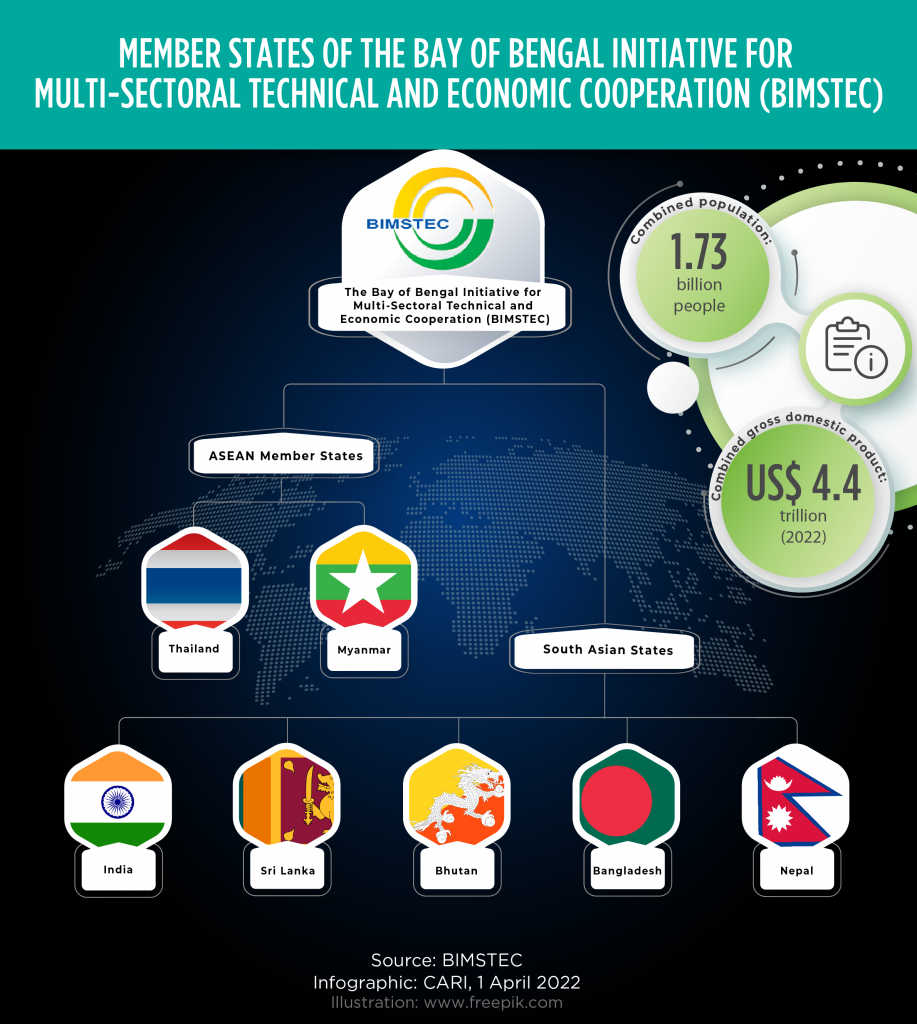 ASEAN
India calls for more regional cooperation at Bimstec summit, which includes Thailand and Myanmar
(30 March 2022) India called for greater regional cooperation among the member states of the Bay of Bengal Initiative for Multi-Sectoral Technical and Economic Cooperation (Bimstec), which comprises countries which border the Bay of Bengal, including the Southeast Asian states of Thailand and Myanmar. Other member states include Bangladesh, Bhutan, India, Nepal, and Sri Lanka. Officials stated that India would also take charge of matters related to the ‘security pillar’, which includes maritime security. India has been keen to push Bimstec as the core regional grouping in an effort to fortify its presence in the region. During the summit, India pledged US$1 million to the grouping’s budget, and also highlighted the need for a coastal shipping ecosystem among the members. India also pitched a free trade agreement for the group. A Master Plan for Transport Connectivity among the countries was also announced.

ASEAN, UNITED STATES
United States mulling tariffs on solar panels imported from Malaysia, Thailand, Viet Nam and Cambodia
(29 March 2022) US trade officials stated they would launch an investigation into solar panels imported from four Southeast Asian countries, namely Malaysia, Thailand, Viet Nam and Cambodia. The investigation was launched after a California-based solar manufacturer claimed that Chinese solar panel manufacturers had shifted production to Southeast Asia to avoid paying U.S. duties in place for nearly a decade on Chinese-made solar goods. According to the American Clean Power Association industry group, imports from these four ASEAN countries accounted for 80% of the panels expected to be installed in the United States in 2022. Solar industry trade groups in the US warned that the investigations alone would immediately hamstring project development and harm U.S. progress in addressing climate change.

INDONESIA
Government revokes forest concession permits covering 482,198.72 hectares of forests
(30 March 2022) The Indonesian government has revoked forest concession permits from 15 companies, covering 482,198.72 hectares of forests, in an effort to improve governance and transparency in its natural resources sector. In January 2022, Indonesian President Joko Widodo announced more than 2,000 mining, plantation and forest-use permits had been revoked due to non-compliance or because they had remained unused. According to Indonesia’s investment ministry, the permits were revoked based on a recommendation from the forestry ministry, and that the companies had been given time to clarify and verify the status of their operations before the permits removal became permanent. Among the companies which had their permits revoked included those which operated palm and timber plantations as well as logging operations across Sumatra, Kalimantan and Papua.

THE PHILIPPINES
The Philippines central bank considers raising policy rate to between 2.5% to 2.75% as reasonable
(30 March 2022) According to the governor of the Philippines’ central bank, Benjamin Diokno, raising the key policy rate to between 2.5% to 2.75% as part of an exit from the bank’s COVID-19 accommodative stance would be “reasonable and consistent”. Diokno stated that the bank would begin the normalization process in the second half of 2022, and that reaching a 2.75% key policy rate might be reached by 2023. Last week, the central bank maintained its interest rates steady at a record low 2%. While authorities see inflation averaging above its 2%-4% target in 2022, it expects consumer-price increases to be within the goal in 2023. The Philippines’ central bank has refrained from the global rate-hiking cycle, choosing to focus instead on nurturing the economic recovery.

BRUNEI DARUSSALAM, UNITED ARAB EMIRATES
Brunei signs MoU with UAE to help expand and develop Bruneian maritime industry in terms of human resources
(30 March 2022) A Memorandum of Understanding (MoU) was signed on 29 March between the governments of Brunei Darussalam and the United Arab Emirates, and took place on the sidelines of Sultan Hassanal Bolkiah’s working visit to Dubai. The MoU on the Recognition of Certificate Issued under the Provisions of the International Convention on Standards of Training, Certification and Watch Keeping for Seafarers, 1978 as amended is to help expand and develop the Bruneian maritime industry in terms of human resources. The MoU formalizes Emirati recognition of the competency certificates of Bruneian seafarers, thus opening up employment opportunities on merchant ships registered under Brunei and the UAE. The maritime institutions of the two countries will be able to be co-recognised by each other.

JAPAN
Japan’s long-term government debt may have topped US$8.2 trillion for first time at end of March 2022
(01 April 2022) Japan’s long-term government debt balance may have topped 1,000 trillion yen (US$8.2 trillion) for the first time at the end of March 2022. This indicates the country’s fiscal health, already the worst among the major developed economies, has further deteriorated on swelling social security costs as a result of an aging population, falling tax revenues and emergency spending in response to the COVID-19 pandemic. Growing interest payments on the accumulated debt following a recent uptrend in bond yields would cause further pressure for the Japanese government. The long-term debt balance, which excludes some types of bonds, is likely to have reached 1,030 trillion yen on 31 March 2022, the last day of fiscal 2021. It increased 1.5 times over the past 10 years. For the fiscal year 2022, the government plans to spend over 107 trillion yen in the initial budget, largely on snowballing welfare costs. The government also plans to issue supplementary budgets to counter the COVID-19 pandemic as well as the recent oil and commodity hikes.

AUSTRALIA
Home prices in Sydney fall for second consecutive month, indicating cooling housing market
(01 April 2022) Home prices in Sydney fell for the second consecutive month, signaling a broader cooling in Australia’s housing market. Sydney recorded a 0.2% drop in March 2022, while prices in Melbourne slipped 0.1%. Although prices are still advancing across the country, the 0.3% monthly gain for the country’s eight major cities was the lowest since October 2020. New home loan commitments dropped by 3.7% to US$24.2 billion, down from a record high the previous month. Australia’s property market saw a boom during the pandemic as the central bank cut rates to near zero to prop up the economy. But rising expectations of policy tightening in the months ahead is beginning to cool buyer sentiment. Housing unaffordability has become a major issue in Australia, with income growth trailing well behind property-price gains.

SOUTH KOREA
Factory activity in South Korea slows down in March 2022, with output and export orders shrinking
(01 April 2022) Factory activity in South Korea slowed in March 2022, due in part to the ongoing war in Ukraine as well as supply chain disruptions and inflationary pressures. The IHS Markit purchasing managers’ index (PMI) fell to 51.2 in March 2022 from 53.8 in February, standing above the 50-mark threshold that indicates expansion in activity. It was the 18th straight month of expansion, although it was the lowest in four months. South Korean manufacturers pointed to sharp price rises and sustained supply chain disruptions that had hindered production and demand at the end of the first quarter of 2022, while economic sanctions on Russia and the ongoing war in Ukraine further impacted international demand. New export orders contracted in March 2022, while output also shrank (the first contraction in three months). New orders also barely grew, with the sub-index standing at 50.4.