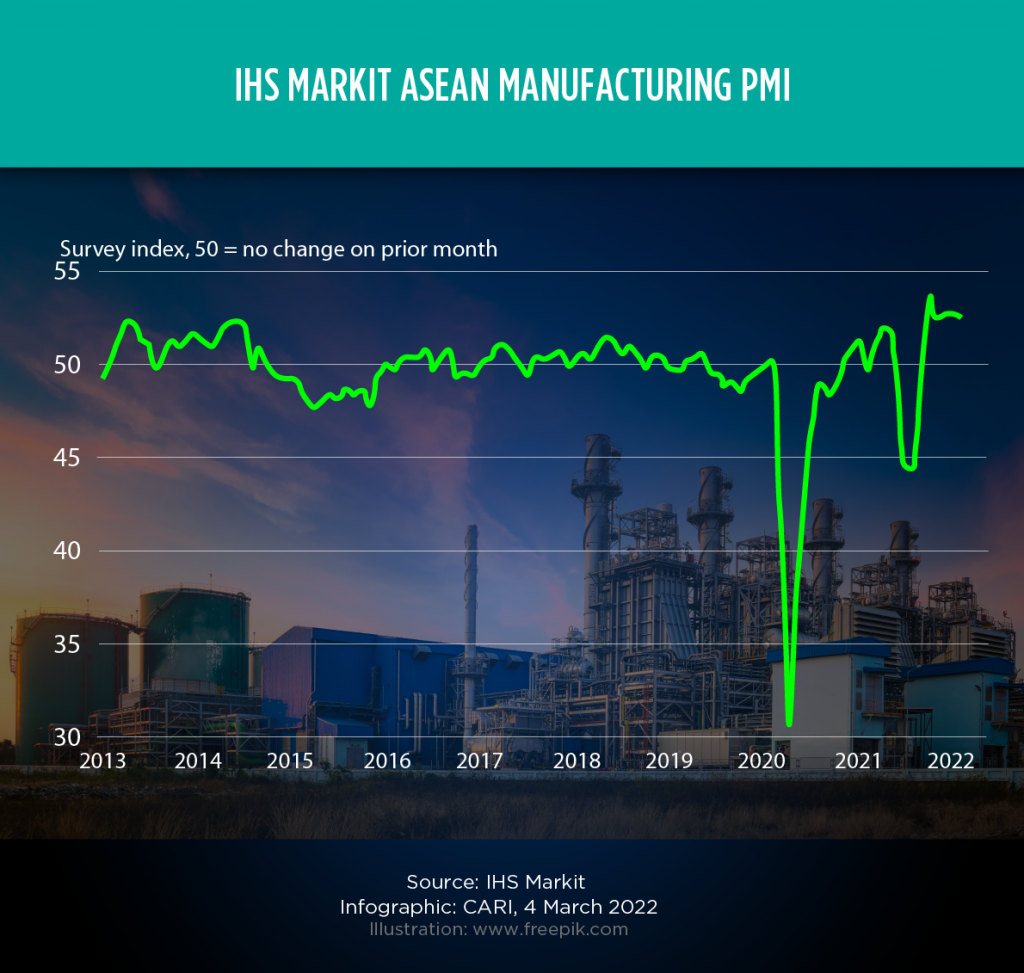 ASEAN
ASEAN manufacturing PMI remains resilient in February 2022 despite rising COVID-19 infections
(01 March 2022) Despite a broad increase in the number of COVID-19 infections across ASEAN, the ASEAN manufacturing PMI as measured by IHS Markit remained resilient in February 2022. ASEAN manufacturing PMI in February was little changed at 52.5, down from 52.7 in January 2022. Readings above 50.0 signals an improvement or increase on the previous month, and February’s reading was the fourth strongest in the nine-year history of the ASEAN PMI. The growth in ASEAN manufacturing output has been attributed to improving new orders performance. According to data collected by IHS Markit, five of the seven ASEAN constituent nations reported new orders growth. However, it was noted that supply constraints continued to present itself as a key hindrance to better manufacturing output performance, with suppliers’ delivery times across the ASEAN region continuing to lengthen at a rate faster than the series average in February. This has been attributed to input shortages, transportation delays and manpower issues, and is expected to prolong upward price pressures.

SINGAPORE, RUSSIA
Singapore to apply sanctions against Russia, including financial measures and export controls
(28 February 2022) The Singaporean government announced on 28 February 2022 that it will apply sanctions against Russia in protest of the latter’s invasion of Ukraine last week. Singapore’s foreign minister announced that among the sanctions that Singapore would impose on Russia include export controls on items that could be used by Russia against Ukrainians. As well, Singapore will block certain Russian banks and financial transactions connected to Russia. The Foreign Minister stated that specific measures were being worked out and would be announced shortly. This announcement is unprecedented by Singapore, who rarely issues sanctions of its own against other countries, and is the first among its regional neighbors and comes independent of ASEAN, which on 26 February called for a de-escalation of the conflict and for dialogue and respect of international law and U.N. commitments.

INDONESIA
Inflation in February 2022 lower than expected due to government subsidies cushioning blow of surging commodity prices
(01 March 2022) Inflation in Indonesia in February 2022 was weaker than expected, as government subsidies helped cushion the blow of surging commodity prices. Consumer prices rose 2.06% year-on-year in February, below the median estimate of 2.2% in a Bloomberg survey of economists. Prices also shrank by 0.02% on a monthly basis, due to price caps on cooking oil and a surplus of poultry and eggs production which tamed food inflation. However, core inflation, which strips out government-controlled and volatile prices, stood at 2.03%, rising at its fastest pace since August 2020. Core inflation was within the central bank’s target range of 2%-4%, and indicated that domestic demand in Indonesia remained resilient despite surging COVID-19 cases. It is believed that inflation could soon accelerate to 3%. The government is considering raising retail gasoline prices now that oil has breached US$100 a barrel in order to ease the burden of subsidies on the budget.

THE PHILIPPINES
Philippines government agrees to include nuclear power into country’s energy mix
(03 March 2022) On 28 February Philippines President Rodrigo Duterte signed an executive order to include nuclear power in the country’s energy mix, as the Philippines seeks to phase out its coal-fired power plants amid seasonal power outages and high electricity prices. The executive order also directs an inter-agency panel to look into reopening the abandoned Bataan Nuclear Power Plant (BNPP), which was built in 1984 but abandoned two years later due to safety concerns. The BNPP plant has operated as a tourist attraction since 2009 in order to defray maintenance costs. The Philippines Energy Undersecretary said a regulatory framework for nuclear power still required legislation and its future also hinged on the agenda of the next administration, which will be formed following elections in May 2022.

THAILAND
Thailand to ease requirements for its quarantine-free entry program starting on 01 March 2022
(28 February 2022) Thailand will ease its requirements for its quarantine-free entry program starting on 01 March 2022, despite fighting its largest infection rate since the pandemic began. Under the new requirements, visitors to the country must take a PCR test upon entry then perform a self-test with an antigen kit on the fifth day of their stay. Previously, travelers had to take a PCR test on the first and fifth day, show proof of a hotel reservation, then wait at the hotel throughout the first five days pending test results. From March onwards, only proof of accommodation for the first day is required. As well, mandatory insurance for foreign visitors will be reduced from US$50,000 to US$20,000. International visitors to the country must still present proof of vaccination at least 14 days prior to departure, as well as proof of a negative PCR test taken no more than 72 hours before traveling to the country. The government projects growth of 3.5% to 4.5%, but this will depend on whether its crucial tourism sector will recover.

VIET NAM
Vietnam moots cut on environmental tax on fuel due to soaring global energy prices
(03 March 2022) Viet Nam’s Finance Ministry stated they would propose to the government to cut its environmental tax on fuel due to soaring global energy prices. The ministry is seeking approval to lower the tax by 25% on gasoline to US$0.13 per litre, while also reducing the tax on diesel fuel and lubricants to US$0.09 per litre. Tax on kerosene would be cut by half to US$0.02 per litre. Domestic gasoline prices rose in line with global energy prices, and has caused inflationary pressures which has impacted businesses and people’s purchasing power. Viet Nam’s consumer price index in the first two months of 2022 rose 1.68% from a year earlier, led by an increase in transport costs, with gasoline prices up 45.3%. Viet Nam plans to keep inflation below 4% in 2022, and believes that with a cut in effect from April to year-end, the CPI would drop by 0.67%.

JAPAN
Japan to ease COVID-19 border controls further from 14 March onwards, to prioritize students
(04 March 2022) Japan will ease its COVID-19 border controls further from 14 March onwards, raising the daily cap on entrants from overseas to 7,000 from the current 5,000. Prime Minister Fumio Kishida introduced a new scheme to give priority to some 150,000 overseas students currently waiting to enter Japan following roughly two years of COVID-19-related restrictions. Under the new scheme, foreign students will be allowed to enter Japan using vacant seats on flights when there aren’t many business travelers. In response to the Omnicron variant, Japan effectively enforced an entry ban on nonresident foreign nationals in late November 2021. As of now, up to 5,000 people, including Japanese nationals overseas, are currently allowed to enter Japan daily. Thirty one of Japan’s 47 prefectures are currently under a quasi-state of emergency to contain the Omnicron variant.

AUSTRALIA
Australia’s stock benchmark outperforming developed peers in terms of profit outlook
(04 March 2022) Australia’s stock benchmark, the S&P/ASX 200 Index, is outperforming those of developed peers in terms of profit outlook, with profit estimates by analysts having jumped nearly 10% in 2022, about triple the increases for the S&P 500 Index and Japan’s Topix. This follows a strong corporate results season, including excellent results from market stalwarts including mining giant Rio Tinto Group and lender Commonwealth Bank of Australia. Materials and energy producers were among companies that surpassed analysts’ expectations. While mining companies benefited from a resurgence in iron ore prices due to an improved outlook for Chinese demand and global concerns about commodities supply due to Russia’s invasion of Ukraine, Australian banks benefited from treasury revenues. The prospect of rising U.S. interest rates and war in Eastern Europe significantly influenced share prices this season, although it was noted that the country’s benchmark fell by just 3.9% this year, less than half the drops seen in U.S. and European benchmarks.

NEW ZEALAND
Reserve Bank projects growth of 2.9% for year through March 2023
(04 March 2022) The Reserve Bank of New Zealand has projected growth of 2.9% for the year through March 2023, compared with the Treasury Department’s December 2021 projection of 4.7%. Daily cases of the Omnicron variant have surged above 20,000 and officials expect the peak of the wave will hit New Zealand later in March 2022. Cost of living is also increasing rapidly, with inflation currently running at 5.9%. The Reserve Bank predicts that inflation will accelerate to 6.6% in the first quarter of 2022 before gradually receding. The central bank has raised the official cash rate three times thus far, taking it to 1%, and signaled ongoing tightening that will take the benchmark above 3% in 2023. The government recently relaxed restrictions on citizens returning home, and signaled that foreign visitors may be allowed to enter sooner than previously indicated.