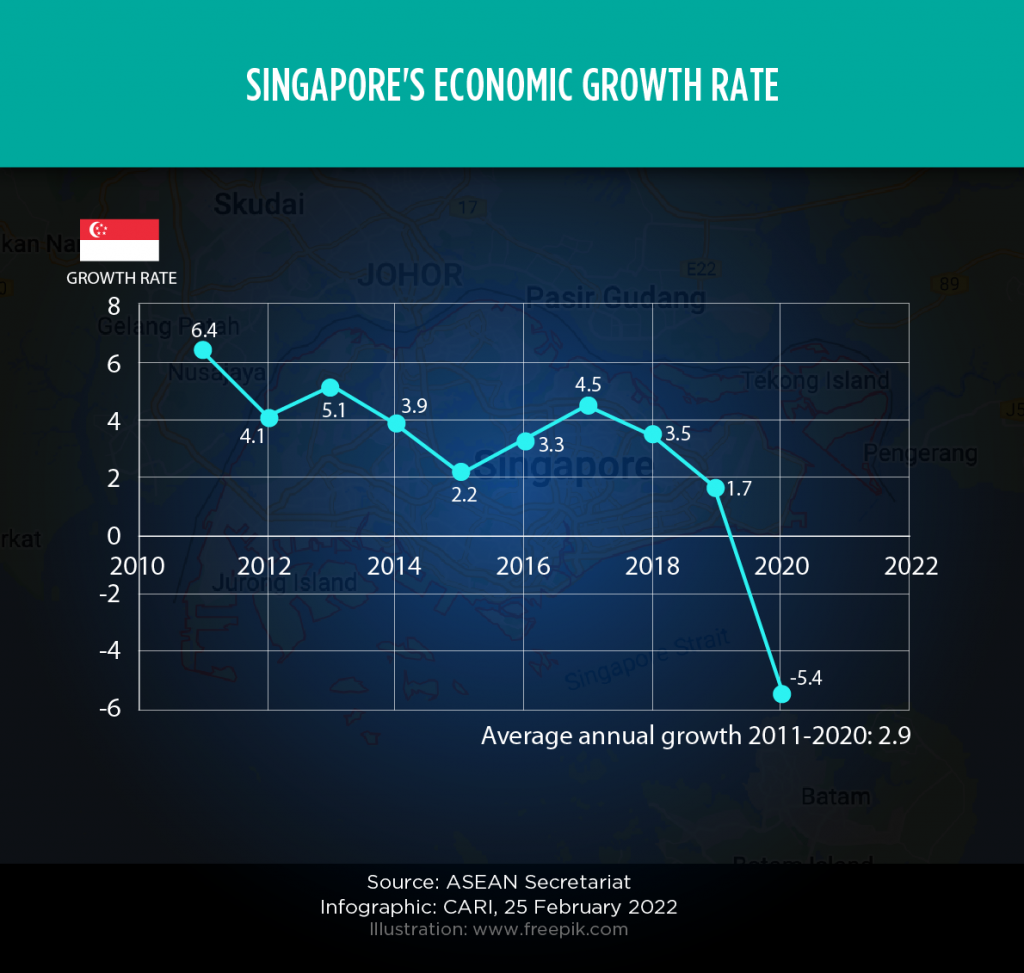 SINGAPORE
Singapore announces 2022 budget proposals
(21 February 2022) Singapore’s finance minister announced the country’s 2022 budget proposals in parliament on 18 February 2022 which included a slew of tax hikes as the country expects government expenditures to increase to over 20% of GDP by 2030. The bulk of the increase in spending is expected to go to healthcare as the country maintains a “multi-layer public health defence” against COVID-19. The proposal also includes a US$372.61 million jobs and business support package, as well as allocations for infrastructure improvements, digital upskilling, and co-funded wage increases for lower-wage workers between 2022 and 2025.

SINGAPORE, INDIA
Singapore, India to boost cooperation in science and technology
(23 February 2022) India and Singapore signed a memorandum of understanding to boost collaborations in research and development in fields of mutual interest. Singapore shared three areas where the countries could “push the boundaries” through cooperation: (i) DeepTech, particularly artificial intelligence and the internet of things especially in the construction and built environment sector, (ii) CleanTech, in line with both countries’ carbon mitigation goals, with a focus on greening the power and transportation sectors, especially in aviation and maritime transport, and (iii) genome and bioinformatics research.

THAILAND
Thailand to ease COVID-19 requirements for international travellers
(23 February 2022) The Thai government will further relax requirements for fully vaccinated international visitors beginning 1 March 2022. Visitors will only need to take one reverse transcription-polymerase chain reaction (RT-PCR) test 72 hours before leaving for Thailand, one more RT-PCR test upon arrival, and one more self-administered test five days after arrival. Visitors need only spend their first night upon arrival in quarantine at a hotel or an approved quarantine facility. The government previously required visitors to spend their fifth day after arrival at a pre-booked accommodation to undergo a second RT-PCR test. The required travel insurance coverage has also been lowered from US$50,000 to US$20,000.

VIETNAM
Vietnam hit by fuel shortages as hundreds of retailers run dry
(23 February 2022) Some 300 petrol stations in Vietnam were forced to halt sales due to fuel shortages caused by the rally in crude oil prices as well as labour shortages as workers throughout the supply chain contract COVID-19. Fuel supplies were also impacted as the country’s largest refinery reduced its capacity in mid-January due to financial constraints. The Vietnamese government has directed its ministries to propose adjustments to taxes on petrol and oil products and announced plans to auction around 102 million litres of its RON-92 petrol from national reserves.

MYANMAR, EU
EU sanctions Myanmar oil firm for providing resources to junta
(22 February 2022) The European Union sanctioned another 22 individuals linked to Myanmar’s military regime as well as four entities known to be providing the regime with “substantive resources”. This includes Myanma Oil and Gas Enterprise, a state-owned oil and gas company and a partner of Thailand’s PTT. So far, TotalEnergies SE, Chevron Corp, and Mitsubishi Corp have announced that they were withdrawing from energy projects in the country. PTT, however, remains unfazed and has offered to acquire TotalEnergies and Chevron’s combined 59.5% stake in Myanmar’s Yadana gas field project.

ASEAN, CANADA
ASEAN-Canada trade volume reached US$19.9 billion in 2020
(19 February 2022) Trade between the ASEAN bloc and Canada came in at around US$19.9 billion in 2020, down 2.4% from 2019’s despite the pandemic. The figures were shared during the Prep SEOM-Canada Consultation held on 17 February 2022 via videoconference. Foreign direct investment from ASEAN to Canada also took a slight 0.9% year-on-year dip totalling US$1.2 billion in 2020, though foreign direct investment from Canada to ASEAN rose by 11.7% reaching US$12.5 billion. Both sides also discussed preparations for the negotiation of the ASEAN-Canada Free Trade Agreement (ACFTA).

THE PHILIPPINES
Philippines’ ratification of the RCEP remains uncertain
(24 February 2022) The Filipino Senate appears unlikely to give its concurrence to the Regional Comprehensive Economic Partnership (RCEP) when it reconvenes on 23 May 2022 as senators remain unconvinced of the country’s need for the trade deal. According to local reports, several senators wished to see more support from the government for the RCEP and some have expressed doubts that the RCEP will be accepted if deliberations are based on the same factors. The Senate will have six days to discuss the RCEP when it resumes in May and should it fail to pass again, the executive branch will need to resubmit it to the Senate when it meets again in July.

HONG KONG
Hong Kong applies to join the RCEP
(22 February 2022) Hong Kong has submitted its application to join the RCEP and could become a member of the trade pact 18 months from now, according to the region’s director-general of trade and industry. According to him, joining the RCEP could boost the island’s re-industrialisation, expand its supply of raw materials, and provide Hong Kong goods with a wider market. Trade between Hong Kong and RCEP members currently totals US$962.6 billion, of which trade in services accounts for US$103 billion.

CHINA
Tesla plans new Shanghai plant to more than double China’s capacity
(24 February 2022) Tesla will reportedly start construction on a new plant in Shanghai next month to double its production capacity in China and produce up to another two million cars per year. The new plant would make China the company’s main export hub when combined with its existing plant which is on track to produce around 22,000 cars a month or 1.1 million cars in a year, subject to the availability of car parts. Neither Tesla nor the Shanghai city government responded to media requests for comment.