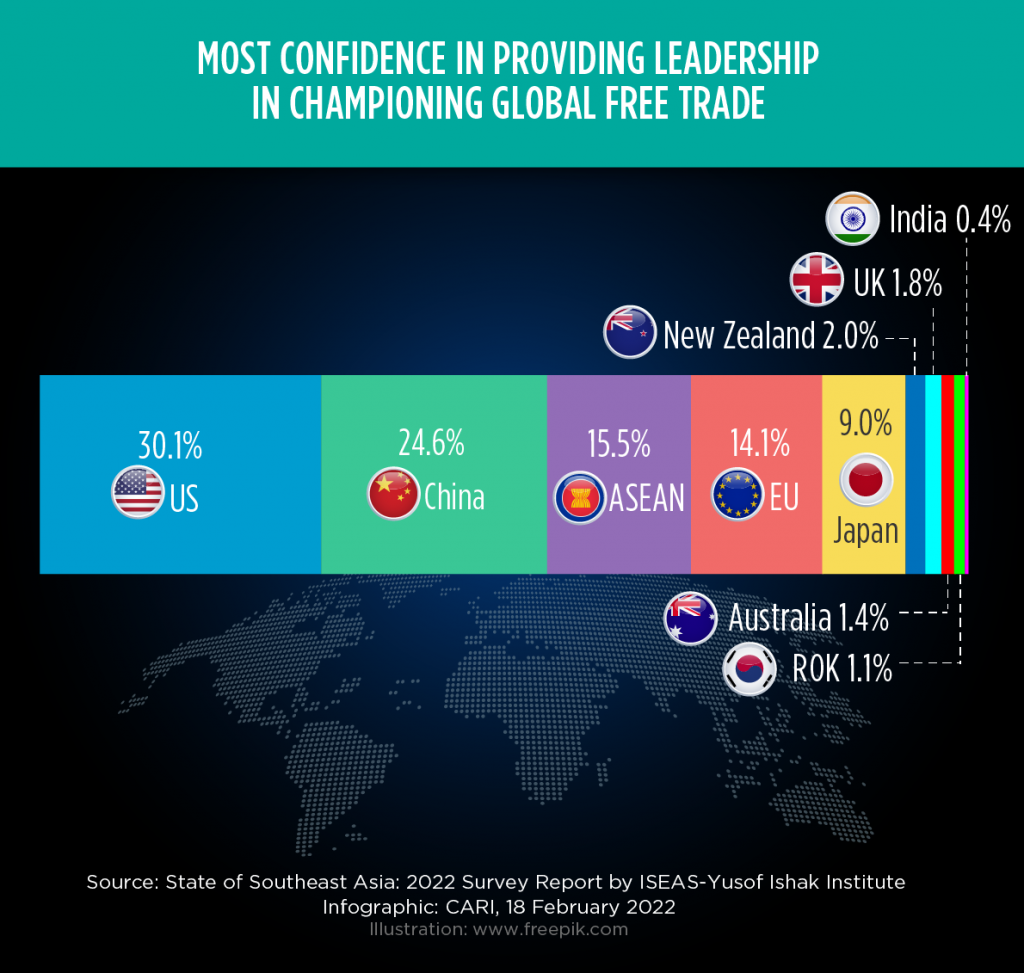 ASEAN
30.1% of Southeast Asian public figures confident US will provide leadership in championing global free trade
(16 February 2022) According to the State of Southeast Asia: 2022 Survey Report released by the ISEAS-Yusof Ishak Institute in Singapore, 30.1% of Southeast Asian public figures, including policymakers, academics, researchers, and civil society activists, were confident in the US providing leadership in championing global free trade, followed by China (24.6%) and ASEAN (15.5%). This was a jump from the 19.7% who expressed confidence in the US in the 2021 survey. However, an overwhelming 76.7% of respondents believed that they regarded China as the most influential economic power in Southeast Asia, while only 9.8% thought the same of the United States. In a question about the potential impact of China’s membership of the Comprehensive and Progressive Trade Agreement for Trans-Pacific Partnership (CPTPP) free trade agreement, 53.2% of respondents believed that it would create economic and political benefits to China, the US and other CPTPP members, including reducing economic tensions and allowing China to undergo domestic reforms. A further 46.8% of respondents believed that the US’ absence from the CPTPP would facilitate the rise of China’s influence in the region.

SINGAPORE
Senior executives in Singapore real estate firms flag rising inflation and interest rates as top risk
(17 February 2022) According to the most recent quarterly Real Estate Sentiment Index (RESI) by the National University of Singapore Real Estate (NUS+RE), nine out of ten senior executives in Singapore-based real estate companies flagged rising inflation and interest rates as the top potential risk factors which might adversely impact market sentiments in the next half of 2022. 73.3% of senior execs identified rising building costs as a key risk, while 65.8% of respondents selected tightening of financing and liquidity in debt markets. Inflation and interest rates topped concerns over rising construction costs, which had topped the list in the previous questionnaire. Meanwhile, the proportion of respondents who indicated "government intervention to cool the market" as a potential risk dropped to 39.5% from the previous 62.8%. The RESI study’s composite sentiment index, an indicator for overall real estate market sentiment, also fell for the third straight quarter to 5.4 in the fourth quarter from 6.6 in the third quarter, although the index stayed above 5, indicating overall sentiment on the property market's current and future conditions remained positive.

MALAYSIA
Daily COVID-19 cases in Malaysia hits record high of 27,831 due to Omnicron variant
(16 February 2022) Malaysia’s new COVID-19 cases reached a record high on 16 February 2022, with 27,831 cases recorded. This new wave has been driven by the more transmissible Omnicron variant, data from the health ministry showed. Malaysia now joins Singapore and Indonesia in dealing with the worst daily COVID-19 caseloads of the pandemic to date. However, hospital occupancy rates remain manageable, due to Malaysia’s high vaccination rate, with nearly 80% of the total population having completed their regime and more than half the adults having received booster shots. Instances of serious illnesses and deaths are also lower than in last year’s Delta wave, when the country’s health services were pushed to the brink. Almost 99% of daily cases as of now involve patients who show mild or no symptoms, according to data from the health ministry. Authorities believe that the omicron wave is expected to peak in the second half of March 2022.

INDONESIA
Indonesia considering lifting all quarantine requirements for inbound travelers in April 2022
(14 February 2022) Indonesian authorities are considering lifting all quarantine requirements for inbound travelers in April 2022, as hospitalizations and fatality rates remain under control despite a resurgence in cases. As of now, the quarantine time for travelers with a third dose of vaccines will be reduced from five days to three starting on the week of the 21 February 2022. Indonesia is currently opening its borders more freely to those who are eligible, in line with neighboring countries. The government is also easing capacity restrictions to improve mobility, including increasing office capacity to 50% or more from the currently stipulated 25%. Authorities stated they intend to keep monitoring the COVID-19 situation with the intention to loosen curbs further.

THE PHILIPPINES
Philippines central bank maintains accommodative policy stance for 10th straight meeting
(17 February 2022) The Philippines central bank maintained its accommodative policy stance for the 10th straight meeting on 17 February 2022, indicating it would start exiting its pandemic support measures when the economic recovery has become sustainable or inflation risks have risen significantly. The Bangko Sentral ng Pilipinas left the benchmark rate at 2% on 17 February, its last rate move was a 25-basis point cut in November 2020. The Philippines is among other Asian economies such as India and Malaysia that have yet to adopt rate hikes in the face of rising inflation globally. The economy grew more quickly than forecast last quarter, underscoring expectations that output will return to pre-pandemic levels in 2022. Inflation slowed 3.0% year-on-year in January 2022, within the bank’s 2% – 4% target range. On Thursday, the bank raised its forecast for average inflation for 2022 to 3.7%, from the 3.4% it forecast in December.

JAPAN
Japanese sovereign bond yields rise as buyers hesitate to buy due to market downturn
(16 February 2022) Longer-maturity yields on Japanese bonds have surged in 2022 in contrast to the flattening trend seen in other major government bonds such as US Treasuries and German bunds. This is set to continue as the big institutions that traditionally dominate purchases of super-long maturities stick to the sidelines, hurt by the recent downturn in global stocks and bonds caused by expectations of monetary tightening in the near future. The gap between Japan’s benchmark 10-year bond yield and its 30-year equivalent has widened to a three-year high, climbing more than 10 basis points in a little over two weeks. While bond investors around the world are being impacted by hawkish central banks, Japanese investors still operate under the super-easy policy of the Bank of Japan, who seem content for now in allowing longer-dated maturities to rise further. It is believed that life insurers may not even have the funds to take advantage of the rise in yields, thanks to sluggish business trends and a faster pace of purchases earlier.

SOUTH KOREA
South Korea added 1.14 million jobs year-on-year in January 2022, the most since March 2000
(16 February 2022) South Korea added 1.14 million jobs year-on-year in January 2022, the most jobs added since March 2000. This was the 11th straight month of gains. The jobless rate declined to 3.6% from 3.8% in December 2021. The gains in jobs adds to the view that the economy will be able to withstand another interest rate hike, as the Bank of Korea seeks to rein in inflation and normalize monetary policy. It also suggests that Koreans have adjusted to living with the virus, even as the country experiences record high daily COVID-19 cases. However, there are concerns the labor market may change due to ongoing restrictions to contain the Omnicron variant of COVID-19. The Finance Ministry has pledged to implement the supplementary budget as quickly as possible once approved.

CHINA
Inflation slows in January 2022, giving central bank more room to cut interest rates to prop up economy
(16 January 2022) China’s inflation slowed in January 2022, giving the central bank more room to cut interest rates and pump liquidity into the financial system to support a slowing economy. The producer price index rose 9.1% from a year earlier, down from 10.3% in December 2021, while consumer-price growth slowed to 0.9%. China’s government has shifted towards a pro-growth policy in late 2021, as the economy reels from a property market slump and repeated COVID-19 outbreaks. Prices of coal, steel and other industries fell in January 2022, driving down the overall cost of industrial products. Although producer price inflation will continue to soften in 2022, oil prices remain uncertain due to ongoing geopolitical tensions. Consumer inflation stayed subdued in January 2022, despite a seasonal spike in demand around the Lunar New Year holidays, which began on the last day of January.