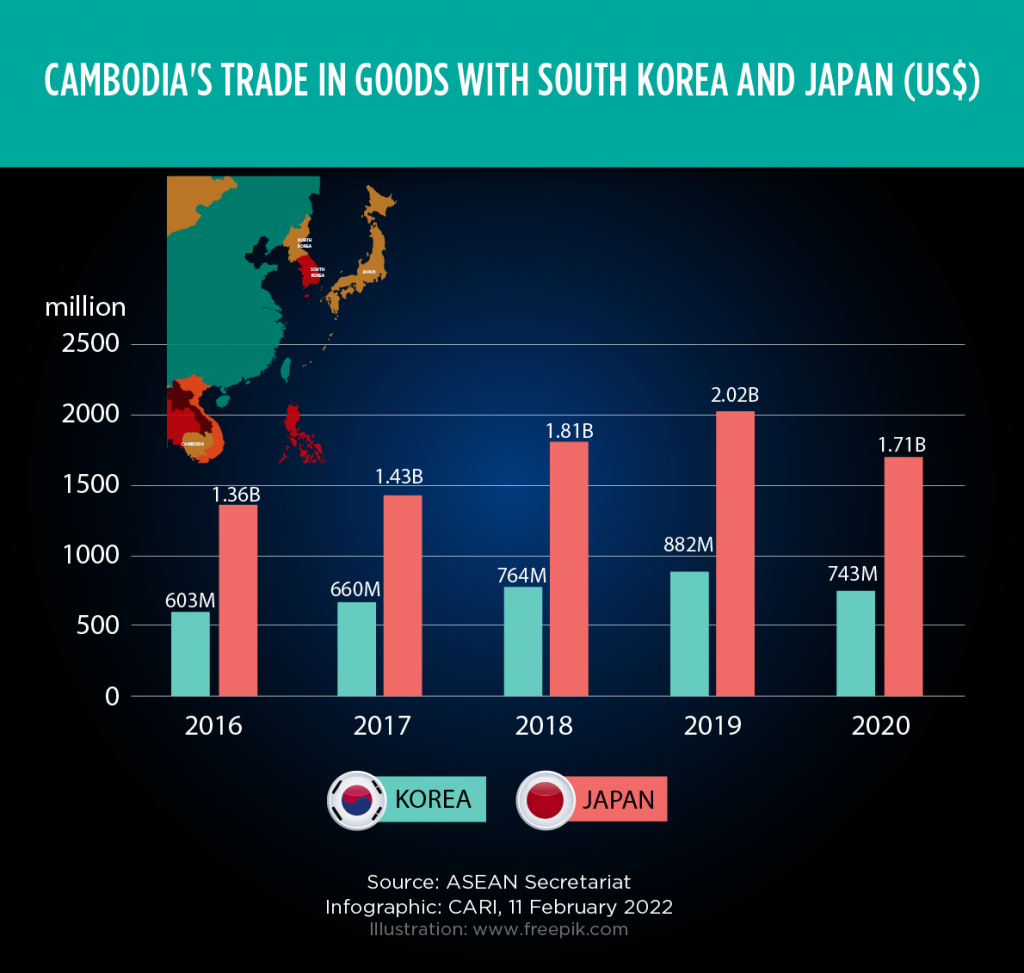 CAMBODIA, SOUTH KOREA
Cambodia ratifies free trade agreement with South Korea
(4 February 2022) Cambodia’s King Norodom Sihamoni ratified the Cambodia-Korea Free Trade Agreement (CKFTA) on 29 January 2022, paving the way for the agreement to come into force within 60 days. The agreement was previously finalised in October 2021, after which it sailed through the country’s legislative bodies in December 2021. Trade between the countries came in at around US$965 million in 2021, up 9% year-on-year, with Cambodian imports from South Korea worth US$623 million and exports worth US$341 million. The CKFTA is expected to boost Cambodia’s exports to South Korea, which mostly comprise garments and textiles, footwear, bags, electronics, spare parts, rubber and agricultural products.

CAMBODIA, JAPAN
Cambodia and Japan mull the possibility of a bilateral FTA
(4 February 2022) Cambodia and Japan are discussing the possibility of a bilateral free trade agreement to boost the flow of trade, services and investment between the countries, according to Cambodia’s commerce minister who shared that his ministry was discussing the matter with the Japan-Cambodia Association. JETRO data found that trade between the countries totalled US$2.33 billion in 2021, up almost 11% year-on-year. Cambodian exports accounted for US$1.75 billion of the sum, while its imports from Japan accounted for US$1.72 billion. However, preliminary data from Cambodia’s Ministry of Commerce showed that bilateral trade came in at around US$1.70 billion in 2021, with exports to Japan at US$1.09 billion and imports at US$0.49 billion.

ASEAN
Myanmar to send non-political representative to upcoming meeting
(5 February 2022) Cambodia has asked Myanmar to send a “non-political entity” to represent it at the ASEAN Foreign Ministers’ Retreat to be held on 16-17 February 2022, citing a lack of progress in carrying out the five-point consensus laid out by the bloc. The statement published by Cambodia’s Ministry of Foreign Affairs on 2 February 2022 also reiterated ASEAN Member States’ concerns regarding the deteriorating humanitarian situation in Myanmar. Myanmar has reportedly agreed to send its Permanent Secretary for Foreign Affairs to the ministerial retreat.

ASEAN
ASEAN-6 car sales rise for first time in three years
(7 February 2022) Sales of new cars in the ASEAN-6 (Indonesia, Thailand, Malaysia, Vietnam, Singapore and the Philippines) totalled 2.79 million units in 2021, up 14% year-on-year, but still around 20% less than in 2019. Indonesia led the way with a 67% jump as it overtook Thailand to become the top market for new cars in the region for the first time in two years thanks to tax breaks introduced by the government in March 2021. New car sales in both Thailand and Malaysia declined by 4%, while sales in Vietnam and the Philippines rose for the first time in two years at 3% and 16% respectively.

INDONESIA
Indonesia to present carbon neutrality plan at G20 forum
(4 February 2022) The Indonesian government will use its G20 presidency to share its national energy transition plan and the roadmap it hopes to use to achieve net-zero emission by 2060. To this end, the government will develop a 100% renewable energy mix comprising solar power, hydroelectric power, wind power, nuclear power, bio-energy power, geothermal power and ocean power. The government will also phase out its use of electric steam, steam and gas power plants, and additional power generation after 2030 will only be sourced from renewable energy.

INDONESIA
Bali reopens to foreign travellers from all countries
(4 February 2022) Indonesia’s Bali island has reopened its borders to foreign visitors from all countries and international direct flight arrivals for the first time since the pandemic started two years ago. Foreign visitors will need to show their COVID-19 vaccination certificates issued at least 14 days before departure and negative RT-PCR test results from their country of origin taken no more than 48 hours before departure. Foreign visitors must also undergo quarantine upon arrival in a hotel or on a certified liveaboard boat — five days for the fully vaccinated and seven days for those with only one dose.

THE PHILIPPINES
THE PHILIPPINES
(10 February 2022) The Philippines this week reopened its borders to foreign visitors for the first time in almost two years. Starting 10 February 2022, foreigners from 157 countries with existing visa-free arrangements with the Philippines will be able to enter the country without having to undergo quarantine. However, visitors will need to show proof that they have been fully vaccinated and that they have tested negative for COVID-19. The Philippines had earlier planned to reopen its borders to tourists on 1 December 2021 but this was postponed due to the emergence of the omicron variant.

THE PHILIPPINES
Senators go on break without approving RCEP
(4 February 2022) The Philippines’ Senate adjourned for the election break without giving its concurrence to the Regional Comprehensive Economic Partnership (RCEP) agreement’s ratification. Nevertheless, the country’s trade secretary said that he was optimistic that the Senate would eventually do so when it resumes on 23 May 2022 despite continued opposition from certain farmer groups. He reiterated that the government expects the RCEP to drive GDP expansion above 6%, FDI growth to 49%, and export growth up to 15%.

SOUTH KOREA
RCEP takes effect on 1 February 2022
(3 February 2022) The RCEP entered into force in South Korea on 1 February 2022, 60 days after it submitted its instrument of ratification. South Korea’s trade ministry expects the pact to help expand market access for key exports such as steel and cars, as well as service sectors such as online gaming, animation, film and music. The ministry also noted that the RCEP provides South Korea’s entertainment content even greater access than the ASEAN-Korea Free Trade Agreement does, particularly to the Philippines, Thailand and Indonesia. The pact is the first free trade agreement between South Korea and Japan.

AUSTRALIA
Australia to reopen borders to international travel
(7 February 2022) Australia will fully reopen its borders to vaccinated travellers starting 21 February 2022. Anyone entering the country will need to provide proof that they have been “double vaccinated”, while those who are unvaccinated will need to apply for a travel exemption and have a valid medical reason. If such an exemption is approved, the unvaccinated person will be quarantined at a hotel upon arrival. Australia’s borders have been in full lockdown since March 2020, with only certain groups of international students and skilled migrants allowed to enter since December 2021.