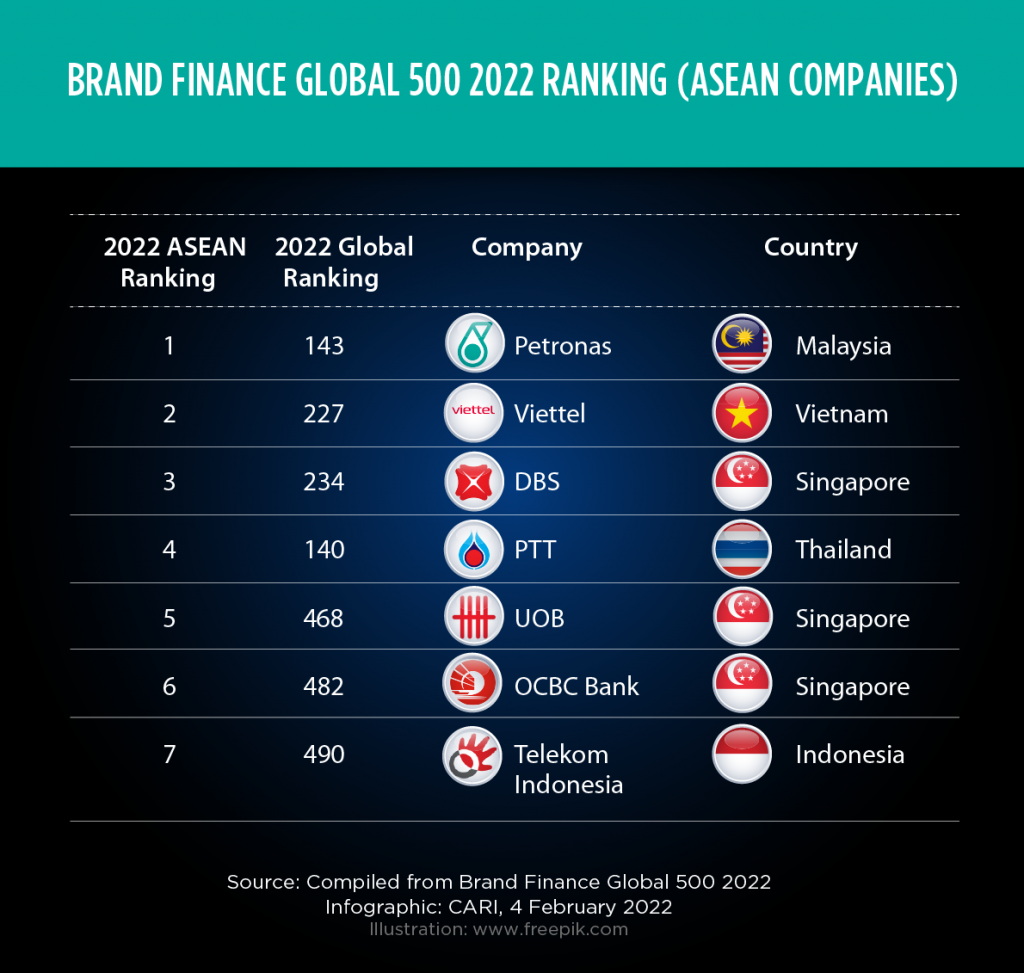 ASEAN
PETRONAS Retains Title As Most Valuable ASEAN Brand In 2022
(28 Jan 2022) Petronas has maintained its position as the most valuable ASEAN brand in the Brand Finance Global 500 2022 report with a brand value of US$13.6 billion, which is 13% higher than the previous year. Energy demand is rising as the economy recovers from the impact of the pandemic, which has allowed Petronas to bounce back this year from the challenges that the oil and gas industry had to face in 2020.

ASEAN
Nikkei: ASEAN Start up Fundrasing more than doubled in 2021
(31 Jan 2022) Southeast Asian startups raised a record US$25.7 billion in funding last year, more than double the previous year as cash-rich global investors seek to tap the region’s potential amid digitalization driven by the COVID-19 pandemic. With private equity and venture capital firms looking for investment opportunities to deploy capital they raised over the past year, experts say the Southeast Asian “gold rush” will continue in 2022, stoking momentum in the region’s startup ecosystem. But a recent tech sell-off in public markets globally highlights a changing environment, potentially affecting the valuation of growth-driven startups.

LAOS PDR
Laos undergoes leadership reshuffle
(4 Feb 2022) Laos has announced a high-level reshuffle of its leadership, less than one year after the new government assumed office last March. This is the first reshuffle of leadership since the National Assembly approved the new cabinet members last year. The change took place after the government announced the need to implement two national agendas to address economic and financial difficulties and drug trafficking. The reshuffle is aimed at strengthening administrative and government agencies in response to the changing needs of the nation to overcome challenges triggered by the COVID-19 pandemic.

MALAYSIA
Foreign buying picks up on Bursa Malaysia
(31 Jan 2022) The pace of foreign buying on Bursa Malaysia accelerated with RM116.45mil net of equities purchased over the past trading week. According to a MIDF Research data, this was an improvement over RM11.35mil net bought over the week before. Foreign investors recorded growing interest in Malaysian equities with the largest net buying recorded on Tuesday to the tune of RM89.04mil.

THAILAND
Thailand follows ASEAN peers in applying cryptocurrency controls
(3 Feb 2022) Thailand’s central bank is falling in with its regional peers after announcing tougher regulation of cryptocurrencies and limiting their use for payments to ensure they can only be traded as assets on licensed platforms. The Bank of Thailand (BoT) said on Jan. 25 that it was drafting regulations to prevent Bitcoin and other cryptocurrencies from being used to make payments because the volatility of digital tokens would create risks and losses for both buyers and sellers. Other members of the Association of Southeast Asian Nations (ASEAN), including Brunei, Indonesia and Malaysia, have announced similar rules in recent years. Even in some countries where Bitcoin is popular, such as Singapore and Vietnam, the central banks do not allow crypto payments.

VIETNAM
Vietnam’s leather and footwear industry set export target of US$25 billion for 2022
(4 Feb 2022) Vietnam’s export of leather, footwear and bags this year will likely increase 10-15% year-on-year to about US$23-25 billion, the Vietnam Leather, Footwear and Handbag Association (Lefaso) has forecast. The prediction was delivered by Lefaso based on the world economic outlook and developments, control of the COVID-19 pandemic as well as several orders businesses inked for 2022. Last year, the export turnover of leather, footwear and handbags saw a modest yearly increase of 4.6% to reach US$20.78 billion. In which, footwear exports hit US$17.77 billion, up 6.1% while export of suitcase and bag products topped nearly US$3.01 billion, down 3.2%.

ASEAN, JAPAN, CHINA, SOUTH KOREA
ADB to Develop Prototype for Cross-Border Securities Transaction System Using Blockchain | Asian Development Bank
(26 Jan 2022) The Asian Development Bank (ADB) has launched a project to make cross-border securities transactions in Asia and the Pacific more efficient and secure through the use of blockchain technology. Working with leading blockchain companies, ADB will seek to develop ways to directly connect central banks and securities depositories in the ASEAN+3 region within a blockchain network. The region consists of the Association of Southeast Asian Nations plus Japan, the People’s Republic of China, and the Republic of Korea. The project will be carried out in 2 phases: a designing phase, to be completed by the end of March 2022, and a prototyping phase, scheduled for the second quarter of 2022.

SOUTH KOREA
ASEAN youths pick south Korea as the most trustworthy country
(30 Jan 2022) The survey by The ASEAN-Korea Centre showed that 93.6% of ASEAN youth and 96.7% of ASEAN youth residing in Korea responded that they trust Korea the most. For the same question, Japan (92%) came in second and Australia (87.6%) third. Participating ASEAN young people residing in Korea answered Australia (91.7%) and Japan (88.2%) as countries they trust. Meanwhile, Korean young people picked the United States (82.7%) as the most trustworthy country, followed by Australia (80.1%) and ASEAN (64.4%). They thought ASEAN countries would be the second most helpful member state in the future, while the US came first.