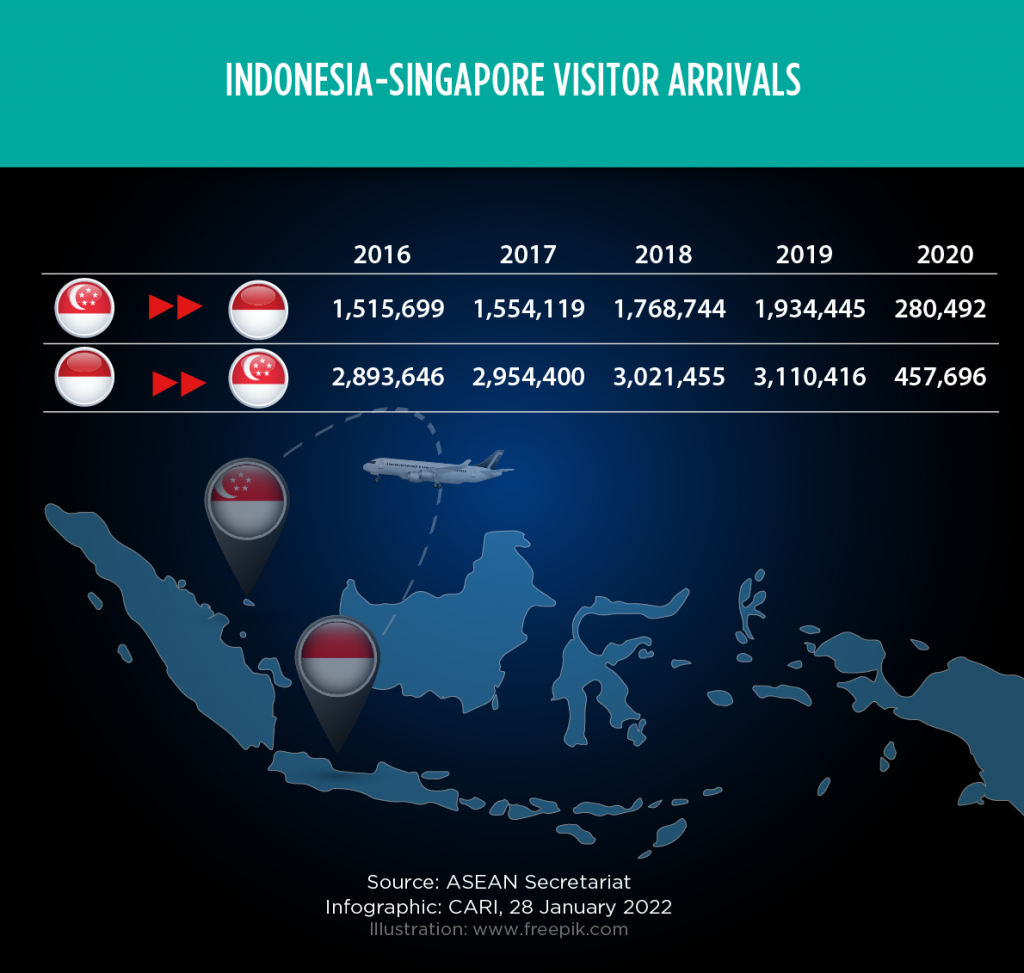 INDONESIA, SINGAPORE
Singapore, Indonesia sign extradition, airspace and defence agreements
(25 January 2022) Indonesia and Singapore signed three agreements resolving longstanding bilateral issues on the occasion of the 5th Singapore-Indonesia Leaders’ Retreat held in Bintan. Under the first agreement, both countries agreed to realign their respective flight information region boundaries and continue delegating the management of parts of Indonesia’s airspace to Singapore’s air traffic controllers, though these arrangements will need to be approved by the International Civil Aviation Organisation. The second agreement provides further guidelines and safeguards for the extradition of fugitives, while the third agreement promotes closer interaction between Singapore and Indonesia’s armed forces.

INDONESIA, SINGAPORE
Indonesia opens quarantine-free travel corridor to Singapore
(24 January 2022) Travellers from Singapore can visit Nongsa in Batam and Lagoi in Bintan beginning 24 January 2022 without undergoing quarantine, though they will need to limit their activities within these locations and are not permitted to go beyond Nongsa and Lagoi. Travellers must have received two rounds of vaccinations and have a negative PCR test taken three days before travelling. They will also be tested again upon arrival, after which they will head directly to their hotel to await the test results which should be out within an hour. Travellers will also need to use the Indonesian COVID-19 tracing applications and have travel insurance.

INDONESIA, TAIWAN
Indonesia partners with Foxconn to develop electric vehicles
(24 January 2022) The Indonesian government and Taiwanese chipmaker Foxconn signed a memorandum of understanding to develop a “new energy ecosystem” and build up Indonesia’s electric vehicle industry. The Indonesia Battery Corporation, energy company PT Indika Energy, and Taiwanese electric scooter company Gogoro were also involved in the agreement. According to Foxconn, the partnership includes the development of supporting industries such as energy storage systems, battery exchange stations, battery recycling capabilities, as well as an open platform that provides electric vehicle hardware and software services. The move comes as Foxconn aims to serve 10% of the world’s electric vehicle component and services market by 2025 to 2027.

MYANMAR
TotalEnergies and Chevron exit Myanmar gas project
(21 January 2022) Oil giants TotalEnergies and Chevron Corp announced that they have decided to withdraw from the Yadana gas project, a joint venture that the companies were involved in alongside Thailand’s PTT Exploration and Production (PTTETP) and Myanmar’s state-owned oil and gas company MOGE, citing deteriorating human rights conditions in Myanmar following last year’s military coup. The Yadana fields produce gas for power plants in Thailand and Myanmar, with 70% of it going to Thailand where it is sold to PTT. TotalEnergies’ spokesperson says that PTTEP would be the “natural” choice for its assets while PTTEP, which holds a 25.5% stake in the joint venture, says that it is “carefully considering” its next steps.

MYANMAR
Junta backs Telenor unit sale after M1 pairs with local firm
(21 January 2022) Myanmar’s military government has reportedly approved the takeover of Norwegian telco Telenor’s local business by a joint venture between Myanmar’s Shwe Byain Phyu Group and Lebanon’s M1 Group, with the former holding the majority stake. The government previously rejected Telenor’s sale of its Myanmar business to Beirut-based M1 Group as it allegedly favoured a local buyer. Shwe Byain Phyu is a group with interests in gem mining and petrol stations, though its chairman is also a director of a consortium that holds a stake in military-owned telco Mytel. All parties either declined to comment on or were not reachable by Reuters.

CAMBODIA, VIETNAM
Cambodia-Vietnam trade reached nearly US$10 billion in 2021
(24 January 2022) Bilateral trade between Vietnam and Cambodia rose by 75% year-on-year to reach US$9.3 billion in 2021 despite the pandemic and both sides have agreed to aim to cross the US$10 billion mark in 2022. Vietnamese businesses also invested in four new projects in Cambodia worth around US$88.9 million, bringing its total investment in the country to around US$2.84 billion and making Vietnam one of Cambodia’s top five foreign investors. These figures were revealed during a meeting between Prime Minister Hun and Vietnam’s foreign minister, where both sides also discussed plans to develop a rail connection between the two countries.

ASEAN
ASEAN looks to market Southeast Asia as a single tourism destination
(25 January 2022) The bloc’s new tourism campaign to market Southeast Asia as a single destination under the tagline “A Destination For Every Dream” was launched at this week’s ASEAN Tourism Forum held in Sihanoukville, Cambodia. The forum also saw the approval of new hygiene and safety guidelines for professionals in the region’s tourism industry, as well as the launch of the ASEAN Safe Travel Stamp which can be used by tourism industry players to assure travellers of their hygiene and safety standards. Preliminary data shared during the forum found tourism receipts in the region to have dropped by around 94% and international tourism arrivals by around 90%, while the average hotel occupancy rate across nine member states came in at around 27.5%.

MALAYSIA
Malaysia ratifies the RCEP, entry into force in March 2022
(22 January 2022) Malaysia submitted its Instrument of Ratification of the Regional Comprehensive Economic Partnership (RCEP) agreement to the ASEAN Secretariat on 17 January 2022, paving the way for the agreement’s entry into force in the country on 18 March 2022. Analysts expect the RCEP to grow Malaysia’s trade by one to two percentage points in the medium term, with wider benefits in the long term particularly due to the further easing of supply chain issues and access to new markets under the RCEP. Malaysia will be the 12th country to ratify the RCEP following Singapore, China, Japan, Brunei, Cambodia, Laos Thailand, Vietnam, Australia, New Zealand and South Korea.

THE PHILIPPINES
Trade ministry warns of impact of RCEP ratification delay
(25 January 2022) The Philippines’ trade minister called on the country’s Senate to pass the RCEP bill by 4 February 2022 before the lawmakers go on break for the election period. Failure to do so, he said, could hurt economic activity and job creation as trade and investments are diverted to other countries that have ratified the agreement. The bill was approved by President Rodrigo Duterte on 2 September 2021 and has been awaiting the Senate’s approval since. The RCEP continues to be opposed by farmer groups in the Philippines who feel that more safeguards for vulnerable sectors should be put in place before the bill is passed and that existing trade deals already provide adequate market access.

SOUTH KOREA
South Korea’s GDP growth reached an 11-year high in 2021
(25 January 2022) South Korea’s economy grew by 4.0% last year, its fastest pace in 11 years despite the pandemic thanks to a spike in export demand. Exports new by 4.3% quarter-on-quarter in the fourth quarter, while construction investment grew by 2.9% and private consumption by 1.7%. The economy expanded a seasonally adjusted 1.1% in the fourth quarter, up from the 0.3% expansion in the third quarter. Growth in annual terms in the fourth quarter came in at 4.1%. Analysts expect this uptrend to continue as Korean-made goods continue to drive economic growth and as social distancing measures are eased.