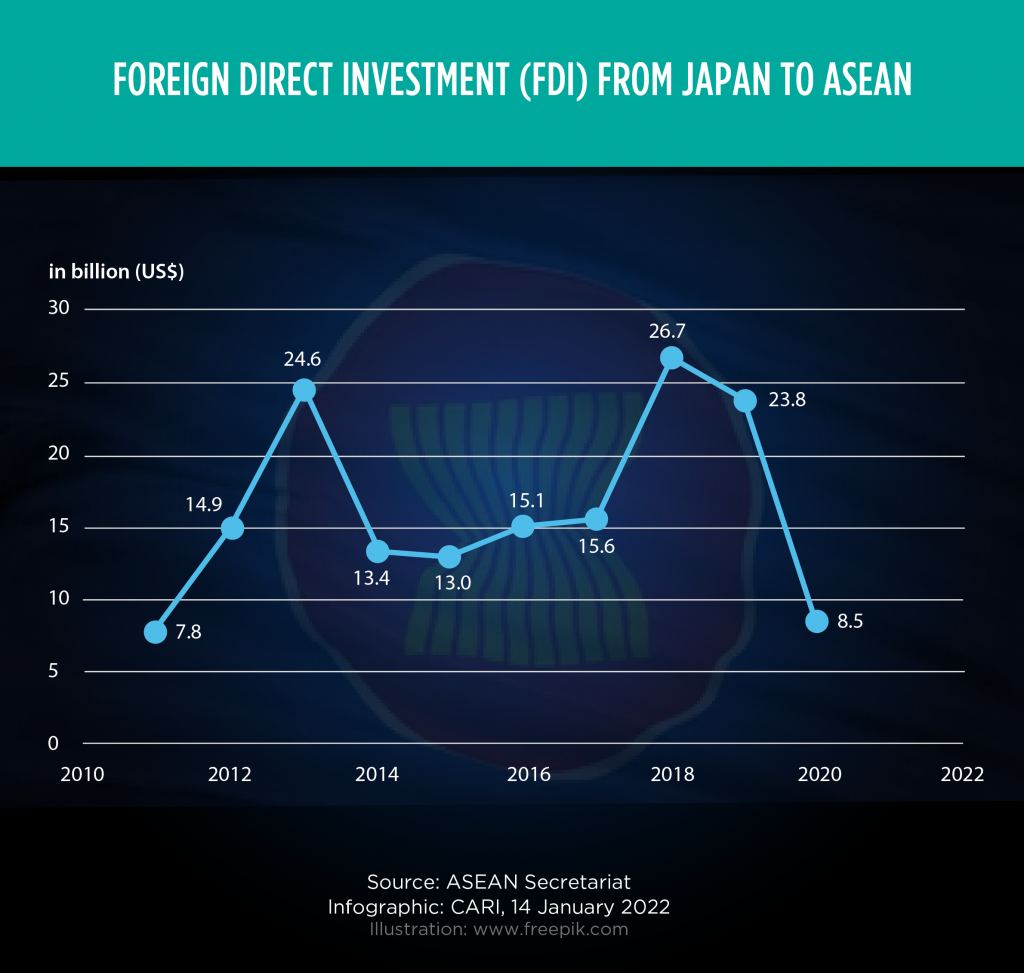 ASEAN, JAPAN
Japan to push for a new chapter of Japan-ASEAN economic relations
(12 January 2022) Japan is looking to bring its economic relationship with ASEAN to the next level to tap into the region’s growing middle class and digital economy, said Japanese trade minister Koichi Hagiuda during his visit to the region. According to him, Japan-ASEAN economic relations has historically centred on manufacturing and this new chapter will be built on three principles: (i) localised solutions for each ASEAN country, (ii) private sector innovation for a sustainable society, as well as (iii) collaboration between local businesses and the Asia-Japan Investing in the Future Initiative. Over 14,000 Japanese companies currently operate in ASEAN. Japan exports to ASEAN grew by 24.9% on the year in the first 11 months of 2021 to reach US$103.7 billion, while imports rose 13.2% to US$102.9 billion.

ASEAN, JAPAN
Japan to help Indonesia, Singapore and Thailand cut carbon emissions
(10 January 2022) Japanese trade minister Koichi Hagiuda signed a slew of agreements during his tour of the region, most notably agreements to help ASEAN countries lower their carbon emissions and develop their green sectors per Tokyo’s Asia Energy Transition Initiative which it launched last year. Thailand and Japan launched a framework for policy dialogues and projects to promote decarbonisation as both countries aim for net-zero greenhouse gas emissions by 2050, Singapore and Japan will cooperate on carbon capture technology and on transitioning to low-emission energy, while Indonesia will adopt Japanese power generation, carbon recycling and carbon dioxide storage technologies.

CAMBODIA, JAPAN
Cambodia to be an international logistics hub for Japan’s Aeon
(10 January 2022) Japanese supermarket operator Aeon announced plans to build a 30,000 square mater logistics hub in Sihanoukville Special Economic Zone with the Japanese government’s backing. The new logistics hub will be operational by 2023, serving Aeon’s chain of shopping malls, providing cross-border online retail services, and connecting Japanese consumer product makers to the Cambodian market. The hub will also be the country’s first bonded warehouse where Aeon can import, store and withdraw goods for low-to-no tariffs. The move comes as Aeon aims to reach US$860 million in operating profit in Asia outside Japan through 2025.

ASEAN
Cambodia postpones ASEAN foreign ministers’ meeting
(12 January 2022) Cambodia, which holds the ASEAN Chairmanship in 2022, announced this week that the ASEAN Foreign Ministers’ Meeting (AMM) Retreat which was initially scheduled to be held in Siem Reap on 19 January 2022 has been postponed due to scheduling conflicts. A new date was not mentioned. While Malaysia’s foreign minister confirms that he would not have been able to attend the meeting, diplomatic observers say that some countries could be avoiding the meeting as a way to protest Cambodia’s decision to invite Myanmar’s junta foreign minister. Indonesian premier Joko Widodo also reiterated the country’s stance on Myanmar’s exclusion until there is significant progress on the five-point consensus peace plan.

INDONESIA
Indonesia relaxes export ban to allow 37 coal vessels to depart
(13 January 2022) Indonesia lifted its ban on coal exports which was first put in place at the start of the year due to concerns of critically low coal supplies at domestic power plants which could lead to widespread power outages. The ban was lifted following the national electricity company’s announcement that it has procured sufficient coal to last 15 days. The shortage was caused by coal miners neglecting the Domestic Market Obligation (DMO) which requires them to sell 25% of their output domestically with a price cap of US$70 per tonne for power plants. A recent study estimated that 490 of Indonesia’s 631 coal miners, who represent around 35-40% of total production, have yet to meet the DMO requirement.

VIETNAM
Vietnam approves US$15.4 billion economic stimulus package
(11 January 2022) Vietnamese lawmakers passed a US$15.4 billion stimulus package for the 2022-2023 period aimed at supporting those impacted by the COVID-19 pandemic. The package includes allocations for healthcare, rent subsidies and infrastructure, as well as measures to reduce value-added tax by 2.0 percentage points and loan interest rates by 0.5-1.0 percentage points. Vietnam expects GDP to grow by 6-6.5% in 2022, up from 2021’s 2.58%. The government also expects exports to grow by 6-8% this year and is targeting industrial output growth of 7-8%, up from last year’s 4.8%.

THAILAND
Thailand’s stock exchange unveils 2022-2024 strategy
(12 January 2022) The Stock Exchange of Thailand (SET) announced its 2022-2024 plan this week under the theme “Connecting Opportunities x Transforming Possibilities” that aims to create a modern capital market for businesses and investors across all segments. This will include the launch of a funding platform for startups and small businesses in the first quarter of the year, as well as the launch of the Thai Digital Assets Exchange (TDX) in the third quarter of the year to cater to the growing interest in digital assets. The SET also plans to create more avenues for local investors to invest in foreign stocks and develop a funding platform for social enterprises.

THAILAND, SOUTH KOREA
Thai exports to South Korea set to rise under RCEP
(10 January 2022) Thailand’s trade authorities expect South Korea to be one of the country’s top trading partners in 2022 as exports to the republic continue to accelerate. Thailand currently enjoys zero tariffs on 90.6% of its exports under the ASEAN-South Korea Free Trade Agreement (AKFTA) which covers goods such as automobiles, electrical appliances, rubber, plastic products and raw sugar. This list is set to expand under the Regional Comprehensive Economic Partnership (RCEP), with tariffs on Thai fruits such as durian and papaya to be zeroed by 2031, canned goods such as sardines and pet food by 2036, and tapioca exports by 2041.

SOUTH KOREA
South Korea to deploy Pfizer COVID-19 pills as Omicron wave looms
(13 January 2022) South Korea has approved the use of Pfizer’s antiviral pills and will begin using them to treat COVID-19 patients this week in hopes that the medication could help restrain the number of patients who develop critical symptoms. Around 1,000 patients will be treated with the medication each day, with priority going to senior citizens and the immunosuppressed. Pfizer claims that its pill is almost 90% effective in preventing hospitalisations and deaths among high-risk groups and that it is equally effective against the Omicron variant. 90% of South Korean adults are fully vaccinated and 55% have received a booster shot as of 12 January 2022.

CHINA
China unveils five-year digital economy plan
(13 January 2022) China wants the output of core industries in its digital economy to account for 10% of the country’s GDP by 2025, up from 7.8% in 2020, according to its 14th five-year plan on the “digital economy” which was made public this week. Other targets under the plan include an increase in the number of Chinese households with access to broadband of at least 1 gigabyte per second from 6.4 million in 2020 to 60 million by 2025, an increase in the number of residents registered for online government services with their real identity from 400 million in 2020 to 800 million by 2025, and an increase in Chinese industrial enterprises connected to “industrial internet platforms” from 14.7% to 45% by 2025.