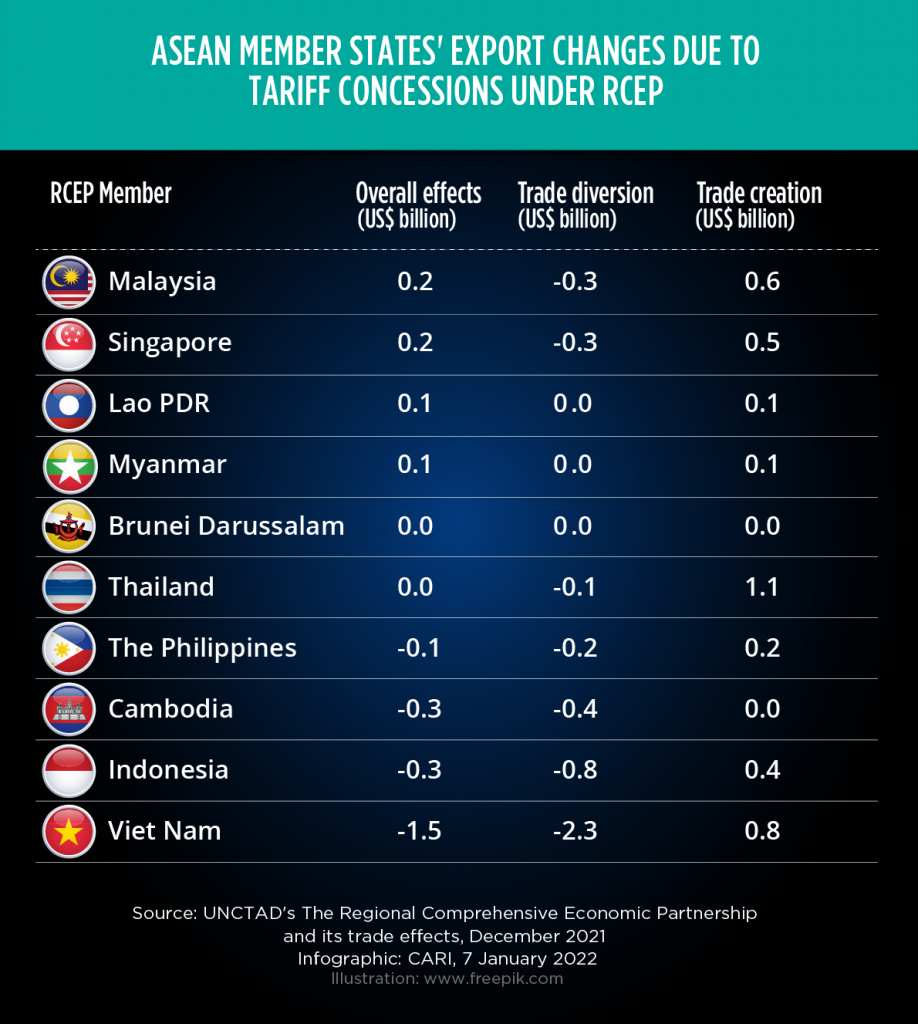 ASEAN
RCEP mega-free trade agreement comes into effect on 1 January 2022
(01 January 2022) On 01 January 2022, the Regional Comprehensive Economic Partnership (RCEP) entered into force. The RCEP agreement represents 30% of the world’s GDP and population, and initially takes effect among the 10 members that completed ratification earlier: including China, Japan, Australia, New Zealand, Brunei Darussalam, Cambodia, Lao PDR, Singapore, Thailand and Viet Nam. South Korea will follow on 01 February 2022. The remaining four countries which have yet to ratify the agreement include Indonesia, Malaysia, Myanmar and the Philippines. According to a recent report by UNCTAD published in mid-December 2021, within ASEAN Malaysia is expected to be the largest beneficiary of the RCEP agreement in terms of gains in exports, with a projected US$0.2 billion increase. On the other hand, Vietnam and Indonesia are likely to see adverse effects — a net loss of US$1.5 billion and US$0.3 billion, respectively — due to trade diversion within the region.

SINGAPORE
Singapore economy rebounds to 7.2% in 2021, due to export demand and vaccine rollout
(03 January 2022) The Singaporean economy expanded by 7.2% in 2021, on the back of export demand and a fast rollout of vaccines. By end-2021, some 87% of the population had been fully vaccinated. 2021’s growth rate is the fastest since 2010, when the economy expanded by 14.5% following the global financial crisis. Singapore’s manufacturing sector expanded by 12.8% in 2021 due to global demand for electronics components, while the services and construction sectors rebounded by 5.2% and 18.7% respectively. For the October to December quarter, GDP expanded by 5.9% year on year, slower than the 7.1% growth recorded in the July to September period. The government has projected a GDP growth in the range of 3% to 5% for 2022, with a key measure to supporting growth including rolling out booster shots. However, some warn that the omicron variant could force authorities to reimpose restrictions, which would delay the recovery in private consumption and investments.

MALAYSIA
Malaysia’s manufacturing PMI expanded 5.9% year on year in December 2021
(05 January 2022) Malaysia’s manufacturing Purchasing Managers’ Index (PMI) expanded slightly to 52.8 in December 2021 compared to 52.3 in November, its highest level since April 2021. This signalled a continued recovery in manufacturing conditions in line with a relaxation of COVID-19 restrictions and rapid vaccine rollout. New orders in December 2021 rose to an eight-month high, underpinned by stronger consumer confidence in both domestic and international markets. Optimism is driven by hopes that the COVID-19 pandemic is receding and a broad recovery in supply chains and the overall economy is in effect. However, backlogs of work expanded, reflecting ongoing raw material and labor shortages. Kenanga Investment Bank Bhd forecast GDP growth of between 3.5% to 4.0% in 2021, and 5.5% to 6.0% in 2022. However, their forecasts are subject to downside risks including the omnicon COVID-19 variant, as well as raw material and labor shortages.

INDONESIA
Indonesia to subsidize 1.2 billion litres of cooking oil in bid to rein in inflation
(05 January 2022) The Indonesian government will subsidize 1.2 billion litres of cooking oil, in a bid to rein in inflation. The government is planning on spending some US$250.78 million on the subsidy, which will be funded through a levy on palm oil exports. Under the plan, the government will sell cooking oil at US$0.97 a litre. Cooking oil prices have jumped significantly, due to an uptrend in palm oil prices. High cooking oil prices, alongside rising egg and chilly prices, have been the main drivers of inflation. December’s 1.87% inflation rate was the highest recorded in 18 months. The government is concerned that high inflation could disrupt Indonesia’s economic recovery from COVID-19. Authorities stated that 70 cooking oil producers will be involved in the cooking oil subsidy programme.

VIET NAM
Vietnamese prime minister warns that Viet Nam’s economy to continue facing pandemic-related risks
(06 January 2022) Viet Nam’s prime minister Pham Minh Chinh warned that Viet Nam’s economy will continue to face pandemic-related risks in 2022, including a widening state budget deficit to rising bad bank debts. Among the difficulties facing the economy include struggling businesses, disbursement of public investments at a multi-year low, the state budget’s increasing non-recurring revenue, and the pandemic’s effects on efforts to restructure the economy. Viet Nam’s Finance Ministry estimated that the 2021 state budget deficit was below 4% of GDP. State budget revenues for 2021 was estimated to be at 1,563 trillion dong, or 16% higher than planned, while state spending was estimated at 1,879 trillion dong, an 11% increase from the government’s plan.

THAILAND
Thailand imposes three-month export ban of live pigs to cool rally in prices
(06 January 2022) Thailand has imposed a three-month export ban of live pigs to cool a rally in prices amidst a meat shortage. Overseas shipments will be prohibited until 05 April 2022, and the Commerce Ministry will monitor the situation to assess whether the ban needs to be extended any further. It is believed that domestic pork prices may double from an average of THB 150 (US$7.5) a few months ago to around THB 300 (US$8.94) baht per kilogram ahead of Lunar New Year celebrations, when traditionally demand for pork rises. Thailand exports about 5% of its live pigs annually to neighboring countries including Cambodia, Viet Nam, Lao PDR and Myanmar. The spike in pork prices is due to limited supply and high feed costs. While the export ban is expected to balance supply with demand, in the longer term the government will promote raising more pigs and producing more feed locally.

THE PHILIPPINES
Inflation rate reaches three-year high of 4.5% in 2021, tempering consumer spending
(05 January 2022) In 2021 the Philippines reached a three-year high inflation rate of 4.5%, creating faster-than-manageable price hikes which tempered consumer spending at a time when it was needed to promote an economic recovery. This was the highest average rate of increase in the prices of basic commodities since 2018, when the inflation rate reached 5.2%. Headline inflation eased to 3.6% in December 2021 — the year’s lowest monthly rate — but the full-year average remained above the central bank’s 2% to 4% target band of price increases deemed conducive to economic growth. Official data showed that areas outside Metro Manila posted a 3.9% year-on-year inflation rate in December, down from 4.5% in November but a faster pace than the 2.8% in NCR. The spike in the inflation rate in 2021 was due to both food inflation as well as higher oil prices.

AUSTRALIA
Citigroup Inc. warns of slowdown in Australia’s growth driven by record-breaking daily COVID-19 cases
(06 January 2022) Citigroup Inc. has warned of a slowdown in Australia’s growth as the country reels from record-breaking daily COVID-19 cases. Economists project a major hit to first-quarter growth that could cap expansion at 1.3%, down from a previous forecast of 2.3%. Despite the fact that authorities have not announced any new significant restrictions, it is believed the record cases will impact economic activity, as consumers choose to stay at home. A nationwide shortage of rapid COVID-19 test kits, coupled with long waits at testing clinics, could also deter people from participating in economic activity for the next month or two. Citigroup expects the Reserve Bank of Australia will start to lift its cash rate in early 2023 from the record low of 0.1%.

NEW ZEALAND
Average home prices in New Zealand exceeded NZ$1 million for the first time in 2021
(05 January 2022) In the final quarter of 2021, New Zealand’s housing market saw record calendar-year price growth and average home prices that exceeded NZ$1 million for the first time. Home prices rose 1.9% in December 2021 from November to a record NZ$1.006 million (US$686,000). Year-on-year, prices surged 27.6%, exceeding the 24.4% increase seen in 2003. Housing prices have soared due to historically-low interest rates and a lack of new construction. However, it is believed that tax changes, regulatory changes, and a gradual tightening of monetary policy will cool the market in 2022. While monthly price increases remain around 2%, the annual rate of growth dropped for the second month in a row after peaking at 28.8% at the end of October 2021, before easing to 28.4% in November.