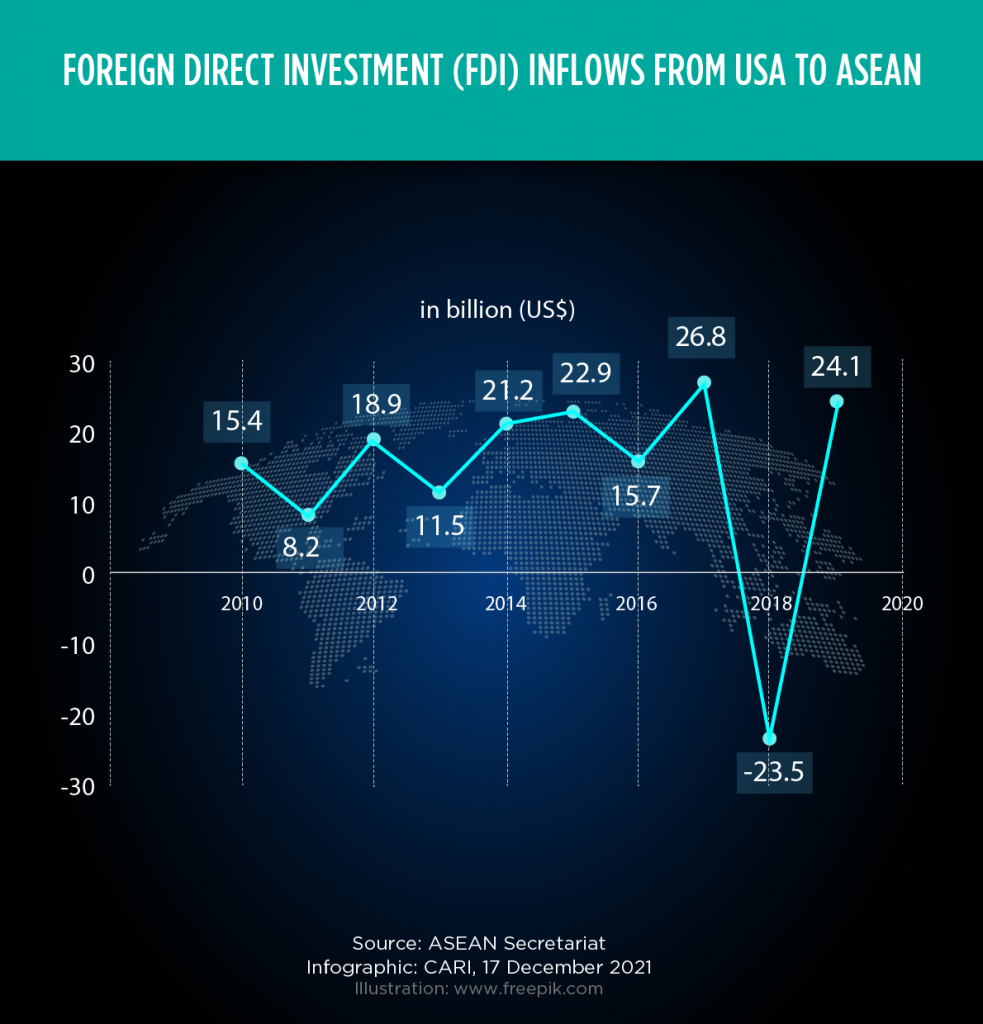 ASEAN, US
US plans ASEAN summit, weighs new sanctions against Myanmar
(15 December 2021) US Secretary of State Antony Blinken said that ASEAN was “essential to the architecture of the Indo-Pacific region” and reiterated President Joe Biden’s plans to host a special summit with the bloc in 2022 which would cover topics such as investment, infrastructure, climate change, and the pandemic. When asked about the country’s stance on Myanmar during his stop in Malaysia, Blinken said that the US was looking at additional steps that could be taken against Myanmar’s military regime including possible sanctions on oil and gas revenues. He also repeated calls for the release of those who have been “unjustly detained” and for Myanmar to be restored “to its democratic path”.

INDONESIA, US
US, Indonesia sign MOUs on maritime and social development cooperation
(14 December 2021) US Secretary of State Antony Blinken started the first leg of his three-country visit to Southeast Asia in Jakarta where he signed three agreements — one on maritime cooperation, the second for social and economic development assistance, and the third to expand youth leadership exchange programmes. The US has so far donated over 25 million vaccine doses and US$77 million in pandemic relief assistance to Indonesia. However, Blinken’s four-day tour of the region was cut short when a journalist in his travelling party was tested positive for COVID-19. Bangkok was meant to be his third and final stop after Jakarta and Kuala Lumpur.

MALAYSIA, US
Malaysia exploring solar energy tie-ups with the US
(16 December 2021) Malaysian energy and natural resources minister said during the US-Malaysia Renewable Energy Roundtable with US Secretary of State Antony Blinken that the country was exploring potential areas of cooperation with the US, particularly in renewable energy, given solar energy's increasingly significant role in the country’s electricity supply. According to him, the government has been rolling out initiatives to meet the country’s climate targets, including plans to introduce a utility-scale battery energy storage system with 500MW capacity in Peninsular Malaysia from 2030 to 2034 to ensure supply reliability.

SINGAPORE, SOUTH KOREA
Singapore and South Korea conclude digital trade deal negotiations
(15 December 2021) Singapore and South Korea announced the conclusion of talks on the Korea-Singapore Digital Partnership Agreement (KSDPA), a deal that sets rules and norms for bilateral cross-border data flows and deepens cooperation in the digital economy between the countries. Among other measures, the KSDPA allows businesses to decide where to process and store data involved in their daily operations and prohibits governments from requiring such activities to be conducted solely within their borders. The agreement will also promote the development of interoperable systems and standards in digital payments and data protection, as well as identify areas of collaboration in artificial intelligence innovation.

CAMBODIA
Cambodia unveils goals for its term as ASEAN Chair
(15 December 2021) Cambodian Prime Minister Hun Sen shared his administration’s two top priorities as ASEAN Chair in 2022. The first is for the Code of Conduct (COC) in the South China Sea to be fully adopted by all parties involved at next year’s ASEAN Summit. The second is for the situation in Myanmar to improve, beginning with the appointment of Cambodian deputy prime minister and foreign minister Prak Sokhonn as the new ASEAN Envoy for Myanmar. Hun Sen also stressed that ASEAN can only act as a mediator in this crisis and that real solutions would have to come from within Myanmar.

VIETNAM
Lego to build first carbon neutral factory in Vietnam
(14 December 2021) Denmark’s Lego Group announced plans to build a US$1 billion factory in Vietnam, its second factory in Asia after China, on the strength of double-digit growth in the region for three consecutive years. The factory will be located in Binh Duong province with production set to start in 2024. Lego plans to make the factory carbon neutral by powering the facility with solar energy, planting 50,000 trees, and meeting the LEED Gold standard. The factory will be developed in collaboration with Singaporean developer Sembcorp and Vietnamese state-owned developer Becamex IDC.

RCEP
UNCTAD publishes new report on the RCEP’s potential impact
(15 December 2021) A new study by the United Nations Conference on Trade and Development (UNCTAD) concluded that the RCEP’s impact on international trade will likely be significant due to the cumulative size and dynamism of its member states. For example, UNCTAD’s analysis found that lower tariffs within the RCEP will stimulate trade between members by nearly US$17 billion and redirect nearly US$25 billion in trade away from non-members to members. However, the report also found that while these tariff concessions will benefit most members, they could also lower exports coming from Cambodia, Indonesia, Vietnam, and the Philippines.