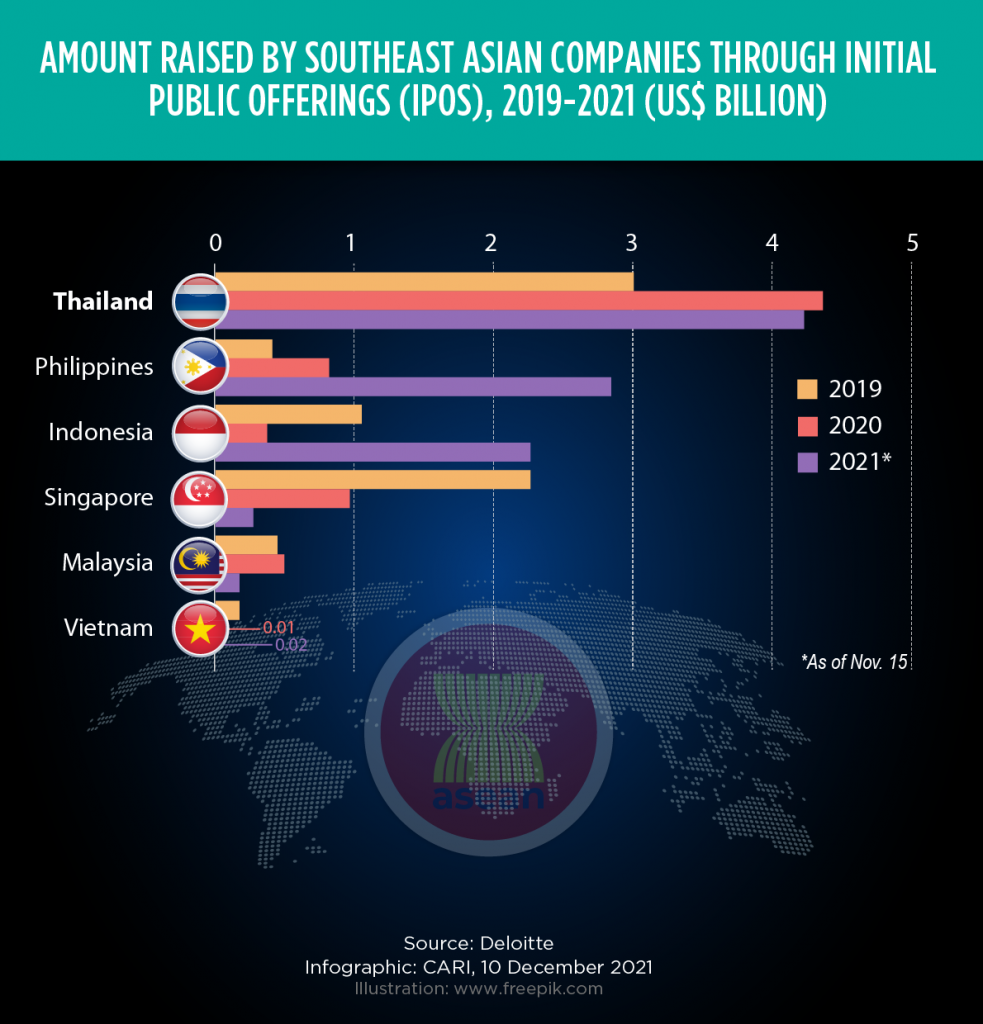 ASEAN
Southeast Asian companies collectively raise more than US$10 billion through IPOs in 2021
(06 December 2021) Southeast Asian companies have collectively raised more than US$10 billion through initial public offerings (IPOs) in 2021, the first time since 2017. According to data collected by Deloitte up to 15 November 2021, 121 Southeast Asian companies raised a total of US$9.77 billion on local bourses, with more companies issuing IPOs during the remainder of the year. The COVID-19 pandemic prompted companies to raise funding to invest into diversifying revenue sources and adjusting to the digitalization of the economy. Thailand led the region in terms of total funds raised in 2021, with 35 companies and real estate investment trusts raising $4.2 billion as of 15 November 2021. Thailand represented 43% of total funds raised in the region as of mid-November. Southeast Asian companies have found receptive investors, in part due to low interest rates ensuring low returns for alternative investment options such as bonds and deposits.

THE PHILIPPINES
The Philippines government seeks nearly US$6 billion loan from central bank in 2022
(08 December 2021) The Philippines bank is seeking a nearly US$6 billion loan from its central bank in 2022. This will be lower than the government’s borrowing in 2021, as officials anticipate the economy to recover next year. The government has informed the Bangko Sentral ng Pilipinas that it will fully repay its outstanding US$10.7 billion provisional advances on 10 December 2021, ahead of the 12 January 2022 maturity. The new loan will carry no interest, and will be due in three months, and can be extended by another three months. The Philippines’ finance chief had stated during a forum on 08 December that government borrowings will start to decline in 2022 as revenue is expected to return to 2019 levels.

THAILAND, MALAYSIA
Thailand to consider reopening borders with Malaysia to revive local tourism and boost economic growth
(06 December 2021) Thai authorities are considering reopening the border with Malaysia in order to revive local tourism and boost economic growth in Thailand’s southern provinces. Thailand’s Centre for Covid-19 Situation Administration (CCSA)’s forward command dealing with COVID-19 in the southern region is expected to make a decision this week, after which they will present the matter to the CCSA for consideration on 13 December. The CCSA had reportedly initially planned to reopen the Thai-Malaysia border on 16 December, but the recent emergence of the Omicron COVID-19 variant in Malaysia has forced Thai authorities to reassess the situation. Border checkpoints that were initially planned for reopening include Sa Dao border checkpoint in Songkhla province, Sungai Kolok checkpoint in Narathiwat province, Betong checkpoint in Yala province, and Wang Prachan checkpoint in Satun province.

SINGAPORE, UNITED KINGDOM
Singapore and UK agree to Digital Economy Agreement, to allow UK businesses to target Singapore market
(09 December 2021) The UK and Singapore agreed in principle to a Digital Economy Agreement (DEA) that will cut costs, slash red tape and pave the way for a new era of trade. An agreement was reached between the UK’s International Trade Secretary Anne-Marie Trevelyan and Singapore Minister-in-charge of Trade Relations S. Iswaran after just six months of negotiations. Referred to as the ‘first digitally-focused trade agreement ever signed by a European nation’, it is expected to further facilitate the UK-Singapore trading relationship – worth £16 billion in 2020 – by overhauling outdated trade rules that affect both goods and services exporters, making it easier for UK business to target new opportunities in both the Singapore and wider Asian markets. The UK government also announced that the DEA will help support the UK’s bid to join the Comprehensive Progressive Trans-Pacific Partnership (CPTPP) free trade agreement, of which Singapore is a signatory.

VIET NAM
Ministry of Transport submits proposal for resumption of international flights to Asia and the US
(08 December 2021) Viet Nam’s Ministry of Transport has submitted a proposal for a two-phased resumption of international flights across Asia and the United States from 15 December onwards. It is proposed that the first phase would include four flights weekly to and from either Los Angeles or San Francisco in the US, plus Singapore, Bangkok, Phnom Penh, Laos, Beijing, Tokyo, Seoul and Taipei. Under phase two, from 1 January 2022 onwards additional routes to Kuala Lumpur, Hong Kong, Paris, Frankfurt, Moscow and Sydney would be added. The first phase would see flights running to and from just two of Viet Nam’s airports in Ho Chi Minh City and Hanoi, to be expanded to include Da Nang City, Cam Ranh, Phu Quoc and Van Don under phase two.

JAPAN
Wholesale inflation in Japan hits record 9.0% in November 2021, pushing gains for ninth straight month
(10 December 2021) Japan’s wholesale inflation hit a record 9.0% in November 2021, pushing gains for a ninth straight month, suggesting upward pressure on prices from supply chain bottlenecks and rising raw material costs were broadening. Rising cost pressures coupled with a weak yen that inflates the price of imported goods is currently complicating Japan’s recovery from the COVID-19 pandemic. An index measuring yen-based import prices rose a record 44.3% year-on-year in November, in a sign a weak yen was inflating input costs for Japan. Oil and coal prices spiked 49.3% year-on-year in November, accelerating from a 44.4% gain in October. Other key drivers were steel goods, which rose 23.9%, and chemical goods, which rose by 14.1%. However, final goods prices rose by only 4.6%, with many companies cautious about passing on their rising input costs to consumers.

AUSTRALIA
Australia risks facing much steeper borrowing costs in future if country too slow to cut carbon emissions
(10 December 2021) Australia runs the risk of much steeper borrowing costs in the future should financial markets view the country as too slow in cutting carbon emissions. It is believed that large funds could disinvest from Australia in order to satisfy their stakeholders, a risk for a traditionally capital-importing nation like Australia. The Swedish central bank recently dumped the bonds of two Australian states, as global investors begin to pressure coal-reliant nations to take action. Government planners have forecasted that the country’s cost of raising capital will increase by 100 basis points in an adverse climate-change scenario without a strategy to reach a net-zero emissions target. Australia’s three largest exports include iron ore, liquefied petroleum gas and coal.