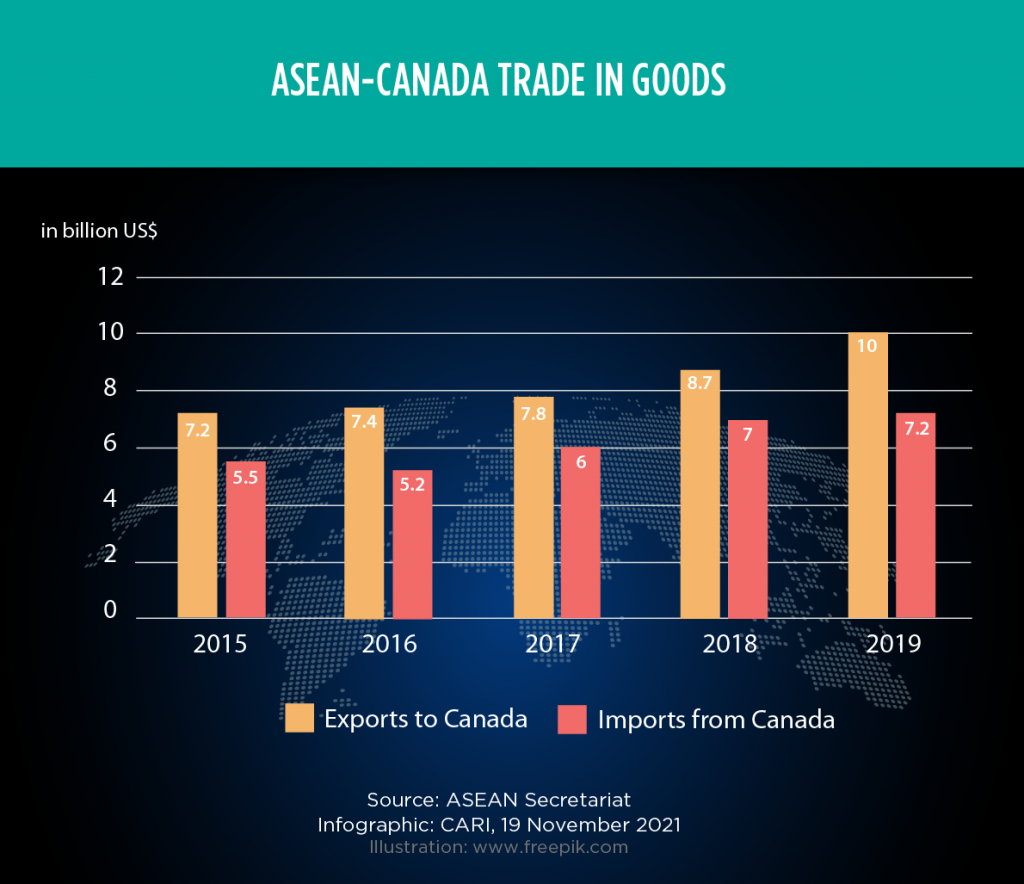 ASEAN launches free trade negotiations with Canada
(16 November 2021) ASEAN and Canada issued a joint statement at the conclusion of the 10th ASEAN Economic Ministers (AEM) – Canada Consultations announcing the commencement of talks for a free trade agreement (FTA), a deal that could result in a US$7.8 billion increase in bilateral trade according to the FTA’s joint feasibility study. ASEAN is currently Canada’s sixth-largest trading partner, and public consultations held in 2018 found Canadians to be highly favourable to an FTA. Trade in goods between Canada and ASEAN reached US$21.2 billion (CA$26.7 billion) in 2020, while trade in services reached US$4.6 billion (CA$5.8 billion) during the same.

ASEAN, EU
ASEAN and the EU launch sustainable development initiative
(18 November 2021) The 3rd ASEAN-EU Dialogue on Sustainable Development concluded with the announcement of a “Green Team Europe” initiative to seek synergies between the European Green Deal and the ASEAN Community Vision 2025. The European Union (EU) — represented by Austria, Denmark, France, Germany, Romania, and the European Investment Bank — will allocate an initial US$34 million grant for the initiative which will be implemented both at national and regional levels in ASEAN. Focus areas include climate action, environmental and biodiversity protection, clean energy transition, disaster resilience, prevention of illegal logging, wildlife trafficking, and air pollution.

ASEAN
FinTech funding in ASEAN tripled between 2020 and 2021
(17 November 2021) A report by UOB, PwC Singapore and the Singapore FinTech Association found that financial technology (FinTech) companies in ASEAN received three times more funding in the first nine months of 2021 alone compared to all of 2020. FinTech firms in the region inked 167 deals worth US$3.5 billion in the first three quarters of the year, primarily driven by 13 mega-rounds which accounted for US$2 billion of the sum. 49% of the 167 deals or US$1.6 billion in funding went to Singapore-based FinTech firms, while Indonesia came in second with US$904 million, followed by Vietnam’s US$375 million.

ASEAN
Southeast Asia begins reopening phase after months of lockdowns
(17 November 2021) More ASEAN countries have announced plans to reopen their borders and roll back pandemic restrictions. Malaysia plans to fully reopen its borders to visitors at the start of 2022, while fully vaccinated travellers can now visit Langkawi island without undergoing quarantine. Indonesia’s Bali and Riau islands opened their doors to visitors from 19 countries in mid-October, while travellers from Indonesia can travel to and from India, Qatar, Saudi Arabia and the UAE without quarantine. Vietnam’s Phu Quoc island will resume flights in January 2022 to fully vaccinated international visitors with no quarantine required.

SINGAPORE, MALAYSIA
Six airlines to provide VTL flights between Singapore and Malaysia
(18 November 2021) The Civil Aviation Authority of Singapore has designated six airlines to operate flights between the two countries under Singapore’s Vaccinated Travel Lane (VTL) scheme starting 29 November 2021. They are AirAsia, Jetstar Asia, Malaysia Airlines, Malindo Air, Scoot, and Singapore Airlines. Travellers from Malaysia can apply for the Vaccinated Travel Pass beginning 22 November 2021. Singapore says that “good progress” has been made on the reopening of the land link between the countries, while Malaysia’s Johor state government told local media that the land and air VTLs will open on the same day.

VIETNAM, US
Vietnam cuts tariffs on US corn, wheat, and pork
(16 November 2021) Vietnam announced that it will lower tariffs on corn, wheat and pork exports from the United States following discussions held during Vice President Kamala Harris’ visit to Hanoi in August. Tariffs on all classes of wheat exports have been removed, tariffs on corn reduced from 5% to 2%, and tariffs on frozen pork reduced from 15% to 10%. The changes to wheat and corn tariffs will go into effect on 30 December 2021, while changes to pork tariffs will go into effect on 1 July 2022. US exports of corn, wheat, and pork to Vietnam were valued at US$228 million in 2020 according to the US Department of Agriculture.

ASEAN, CHINA
ASEAN states object as China lobbies for Myanmar junta to join summit
(18 November 2021) Reuters sources say that four ASEAN countries — Malaysia, Indonesia, Singapore and Brunei — have reiterated their position on the barring of Myanmar’s military leader from the upcoming China-ASEAN Summit on 22 November 2021 hosted by the Chinese premier. Indonesia’s foreign ministry confirmed the country’s stance. China’s special envoy is said to have informed Myanmar’s military leader that China will accept ASEAN’s stand on the matter. Nevertheless, the military leader could still make an appearance at the summit since Myanmar is China’s coordinating country for ASEAN this year, a role that facilitates its interactions with the bloc.

THE PHILIPPINES
Agriculture interest groups oppose ratification of RCEP
(15 November 2021) 45 farmer groups led by the Federation of Free Farmers (FFF) published a position paper calling on the Philippines’ Senate to reject the Regional Comprehensive Economic Partnership (RCEP), citing a lack of consultation with agri-fisheries stakeholders. According to them, joining the RCEP would mean the removal of 75% of the country’s 1,718 agricultural tariff lines and a reduction of 15% of these tariff lines. The group believes that the RCEP will also hamper the effectiveness of existing trade remedies which could lead to import surges and other problems engendered by a lack of safeguards.

(18 November 2021) The United States and Japan announced a new trade partnership to elevate cooperation on labour, environment, digital trade, cooperation in regional and multilateral trade forums, as well as concerns about China. Meetings for the US-Japan Partnership on Trade will commence in 2022 with periodic meetings held regularly. Both sides are expected to discuss bilateral trade issues such as the 25% steel tariff and 10% aluminium tariffs that were imposed by the previous US administration under the US’ Section 232 national security tariffs to curb global excess capacity for these metals.

SOUTH KOREA, SINGAPORE
South Korea opens its borders to vaccinated travellers from Singapore
(14 November 2021) The VTL between Singapore and South Korea came into effect this week, allowing fully vaccinated travellers to travel to and from both countries without quarantine. Under bilateral VTL procedures, travellers will undergo at least four COVID-19 polymerase chain reaction (PCR) tests before flying and upon arrival, with costs borne by the traveller. Travellers must possess a vaccination certificate issued by either Singapore or South Korea and they must prepare both electronic and printed copies of said certificate. Mask wearing is mandatory everywhere in South Korea.