CARI Captures Issue 528: Investments into Southeast Asia’s Digital Economy reaches US$11.5 billion in first half of 2021 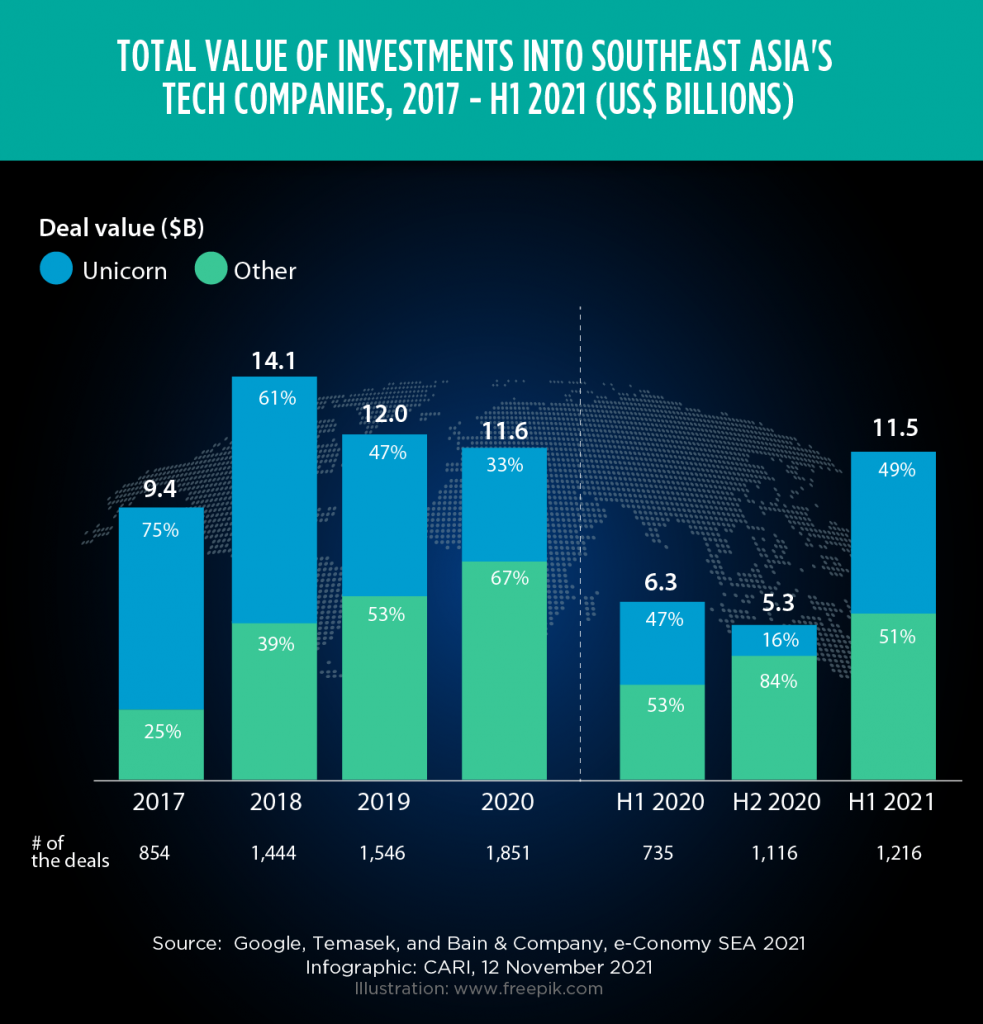 ASEAN
Investments into Southeast Asia’s Digital Economy reaches US$11.5 billion in first half of 2021
(10 November 2021) According to a recently released report by Google, Temasek and Bain & Company, total investments into Southeast Asia’s tech companies reached US$11.5 billion in the first half of 2021, in comparison to the US$11.6 billion invested for the full year of 2020. The total number of deals made in the first six months of 2021 rose by 65% compared to the same period in 2020. The report covers the six digital economies of Vietnam, Thailand, the Philippines, Malaysia, Singapore and Indonesia. The report also found that in 2021 there were 11 freshly-minted consumer tech unicorns in the region, bringing the total number to 23. Southeast Asia’s internet economy is also expected to hit US$360 billion in gross merchandise value by 2025, as well as surpass US$1 trillion in 2030. While all nations covered in the report saw double-digit growth in their digital economies year-on-year in H1 2021, the Philippines saw the largest, at 93% growth.

SINGAPORE, MALAYSIA
Malaysia and Singapore to resume quarantine-free air travel starting on 29 November 2021
(08 November 2021) Malaysia and Singapore have agreed to resume quarantine-free air travel between them starting on 29 November. The arrangement at this point only covers air travel between Singapore’s Changi Airport and Malaysia’s Kuala Lumpur International Airport. The one-hour link was one of the world’s busiest international air routes before the pandemic struck in 2020. According to Singapore’s Transport Minister, under the new scheme only six flights a day would be allowed to enter Changi Airport, and that applications for a vaccinated travel pass to enter Singapore (required only for foreign nationals) would begin on 22 November 2021. Both parties also stated that they were discussing a similar setup for travel between the southern Malaysian state of Johor and Singapore. Prior to COVID-19, around 300,000 residents of southern Malaysia commuted to work in Singapore each day.

INDONESIA, MALAYSIA
Indonesia and Malaysia agree to launch vaccinated travel lane between both countries
(10 November 2021) On 10 November 2021, it was announced that Indonesia and Malaysia had agreed to launch a vaccinated travel lane between both countries in stages. This had been announced following a meeting between Indonesian President Joko Widodo and Malaysian Prime Minister Ismail Sabri Yaakob in Indonesia. The scheme may first start with travel lanes between Jakarta and Kuala Lumpur, as well as Bali and Kuala Lumpur. Ismail Sabri stated that the relevant ministries would study the proposed travel lane in detail, and would eventually make a joint statement to announce the reopening of the borders. Both leaders also witnessed the signing of two memoranda of understanding (MOU) on education and Customs by their relevant ministers.

THAILAND
US$34 million hydro-floating solar hybrid system begins operations in Thailand
(12 November 2021) The world’s largest hydro-floating solar hybrid system began operations in Thailand on 31 October 2021. The solar farm costs US$34 million in total, and is located in Sirindhorn reservoir, about 660 kilometers east of Bangkok. The solar farm is the first of 16 projects planned in key Thai reservoirs, which will have a combined capacity of 2.7 gigawatts. The facility is part of a push by the Thai government to achieve carbon-neutral status by 2050. Currently, natural gas accounts for two thirds of Thailand’s power generation in 2020, while wind, solar and hydropower combined for less than 10%.

INDONESIA
Indonesian tech giant GoTo Group raises US$1.3 billion from investors in first close of ongoing funding round
(11 November 2021) Indonesian tech giant GoTo Group raised US$1.3 billion from investors in the first close of ongoing funding rounds, ahead of a planned initial public offering (IPO). Backers in the pre-IPO funding round included tech giants such Google and Tencent, Singapore state investor Temasek, Malaysian sovereign wealth fund Permodalan Nasional Berhad, and a subsidiary of the Abu Dhabi Investment Authority. The company was formed in May 2021 from the merger of Indonesian tech companies Gojek and Tokopedia, and its businesses span from ride-hailing, financial services and e-commerce. The final close in its ongoing funding rounds is expected in the coming weeks, and the newly injected funds will be invested into growing the customer base and extending payments and financial services. The company is expected to list in early 2022.

VIET NAM
Viet Nam considering raising debt ceiling above 60% of GDP to spur growth
(12 November 2021) The Vietnamese government is considering raising its public debt ceiling above its current level of 60% of GDP to help spur growth following the COVID-19 pandemic. Viet Nam’s GDP contracted by 6.17% year-on-year in the third quarter of 2021, the sharpest contraction on record. As the Vietnamese economy is expected to see upward pressure on inflation in 2022, the country’s central bank may not rely on further easing of monetary policy to help spur more growth. Inflation in 2021 was below the targeted 4%. The Vietnamese government has set a growth target of 6.5% for 2021.

SOUTH KOREA
South Korea’s unemployment rate climbs to 3.2% in October 2021 as job seekers resume job hunting
(10 November 2021) South Korea’s unemployment rate increased to 3.2% in October 2021 from 3% in September, as the planned easing of virus-related restrictions allowed job seekers to resume hunting for work. The South Korean economy also added 652,000 jobs in October from a year earlier, marking the eight straight month of gains. On a month-on-month basis, 18,000 jobs were added. The participation rate in October increased by 0.1% from September to 62.8%. In October, the health and social service sectors added 300,000 positions year-on-year, while 163,000 jobs were added in the transportation and warehouse industry and 108,000 were added in education services.

AUSTRALIA
Australia’s unemployment rate jumps to 5.2% from 4.6% in September 2021
(11 November 2021) Australia’s unemployment rate jumped to 5.2% in October 2021 from 4.6% in September, above economists’ forecast of 4.8%. This signalled a delay in the labor market’s bounce-back from lockdown measures implemented in major cities in 2021. The rise in the unemployment rate was attributed to workers who were initially unable to work during the lockdowns re-entering the labor force in early October to job hunt. The employment rate dropped by 46,300 roles in October, its third monthly decline, compared with economists’ estimate for a 50,000 increase. Employment in Victoria fell by 49,600 people, while New South Wales posted an increase of 21,700.

JAPAN
Corporate profits affected as wholesale inflation hits four-decades high in October 2021
(11 November 2021) Wholesale inflation in Japan hit a four-decade high in October 2021, affecting corporate profits. This comes as supply bottlenecks and rising commodity prices are affecting corporate profits across Asia. The corporate goods price index (CGPI), which measures the prices companies charge each other for their goods and services, surged 8.0% year-on-year in October, exceeding market expectations of a 7.0% gain. This is the fastest increase recorded since January 1981. It is believed that Japanese companies may eventually pass on the higher costs to consumers, which could deal a heavy blow to the latter given weak wage growth in the country. Core consumer prices rose by only 0.1% in September 2021 from a year earlier.