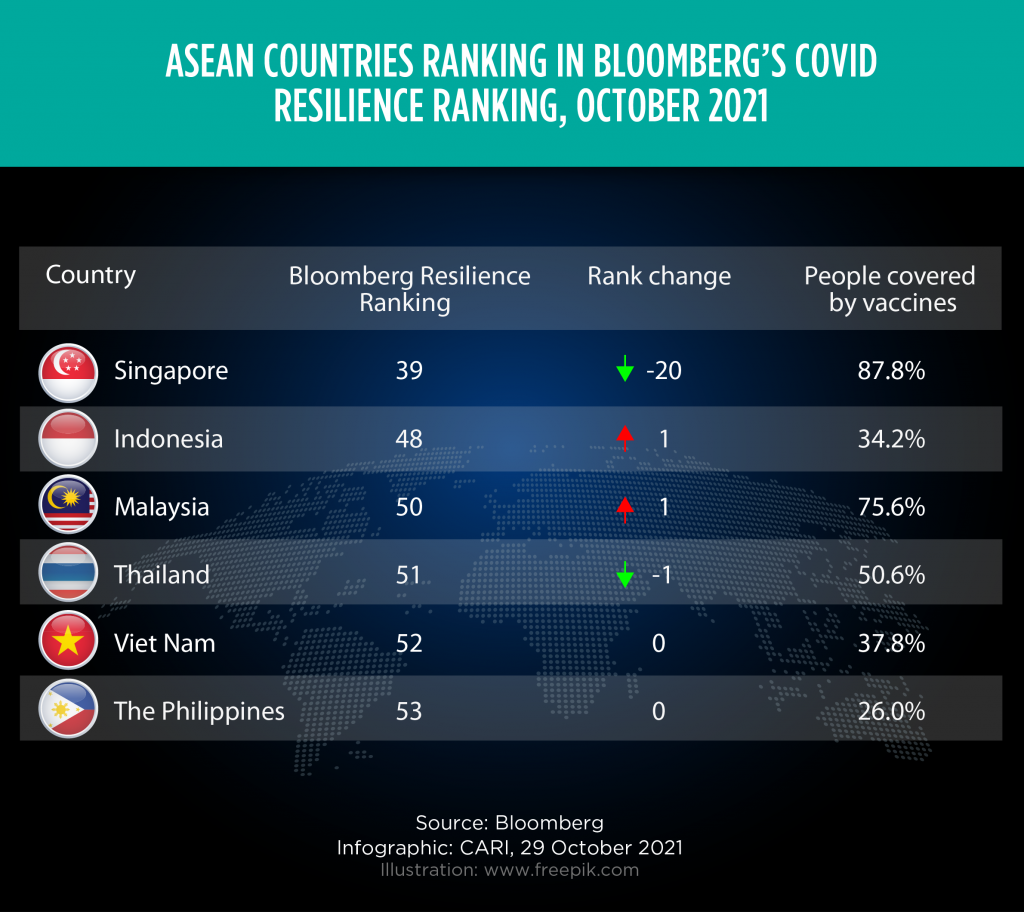 SINGAPORE
Singapore currently occupies lowest spot ever in Bloomberg Covid Resilience Ranking for a former No. 1 occupant
(27 October 2021) Singapore now occupies the lowest spot ever in Bloomberg’s Covid Resilience Ranking for a former No.1 occupant. The city-state had occupied the number one spot in April 2021, and had never dropped below the 19th spot since then, but in the latest iteration of the index released on 27 October, Singapore had dropped 20 spots to the 39th position. Despite 87.8% of its population being vaccinated (one of the highest rates in the world), the city-state still maintains strict COVID-19-related restrictions that have curbed mobility, and has been slow in reopening its borders (scoring low in terms of travel routes and flight capacity recovery). Singapore’s status as an international travel and business hub has made its government committed to reopening its borders soon, having recently announced vaccinated travel lanes to parts of Europe, Australia and the U.S., as well as allowing international conferences to take place with social distancing rules in place.

ASEAN-UNITED STATES
President Biden becomes first US President to attend ASEAN Summit in four years
(26 October 2021) President Biden became the first US President to attend the ASEAN Summit in four years. Biden informed the other ASEAN leaders that they should expect the United States to be more present in Southeast Asia going forward, and that the United States would provide US$100 million to strengthen ties with ASEAN and bolster the United States’ Strategic Partnership with ASEAN. Among the areas where the United States have committed to helping ASEAN include in handling the ongoing COVID-19 pandemic, and at least US$40 million of the new spending is reportedly to help address the pandemic. Biden also emphasized that the United States would focus on climate change in the region, with Southeast Asia being one of the regions most affected by global warming. The junta leaders of Myanmar were excluded from the summit due to the ongoing crisis in the country.

THAILAND
Finance Ministry lowers growth forecast for 2021 to 1% from 1.3% predicted in July 2021
(28 October 2021) Thailand’s Finance Ministry lowered its growth projection for 2021 to 1%, from 1.3% in July 2021. This is the Finance Ministry’s fourth revision this year after its deadliest COVID-19 wave which started in April and which caused restrictions on businesses and travel. It expects the economy to grow 4% in 2022, supported by exports and tourism. The ministry earlier had forecast growth as fast as 5% for 2022. Growth is seen rebounding to 3% in the final quarter of 2021, from a 3.5% contraction in the previous quarter. In September the Bank of Thailand cut its GDP forecast to 0.7%, while the National Economic & Social Development Council followed with a downward revision to 0.7% – 1.2%. The Finance Ministry forecast that the average baht will weaken to 31.93 to the US Dollar in 2021, compared to 31.30 in 2020.

CAMBODIA
Cambodia to partially reopen to international tourists starting on 30 November
(27 October 2021) Cambodia will partially reopen to international tourists starting on 30 November. The Cambodian Tourism Ministry on Tuesday announced a reopening for popular beach spots Sihanoukville and the island of Koh Rong, as well as the Dara Sakor resort zone. The northern city of Siem Reap will be added to the quarantine free list starting in January 2022. Revenue from Cambodia’s tourism industry plummeted from US$5 billion in 2019 to US$1 billion in 2020, due to the travel restrictions put in place due to the COVID-19 pandemic. Under Cambodia’s planned reopening, tourists must remain for a minimum of five days at the pilot locations and undergo a further swab test before being allowed to explore other parts of Cambodia.

CHINA
China doubling down on Zero COVID strategy with less than 100 days until Beijing Winter Olympics
(28 October 2021) China intends to eliminate its COVID-19 outbreak through a ‘zero-COVID’ strategy, with less than 100 days until the Beijing Winter Olympics. This is in contrast to other countries which have pivoted away from a zero-COVID strategy to learning to live with COVID-19 and focusing on vaccine rollouts. China currently requires international arrivals to completely isolate themselves for two to four weeks. Though travellers can spend this time in hotels, there are plans by authorities to monitor them closely in dedicated quarantine facilities such as the Guangzhou International Health Station, located on the outskirts of Guangzhou. Similar facilities are planned for Dongguan and Shenzhen. New locally transmitted cases have increased to between 10 and 60 a day since 19 October, up from the single digits through mid-October. In response, authorities have continued with their strategy of locking down entire cities and launching large-scale PCR testing drives.

AUSTRALIA
Australian government plans to reach net zero greenhouse gas emissions by 2050
(26 October 2021) The Australian federal government has launched a plan to reach net zero greenhouse gas emissions by 2050. The plan includes US$19 billion to be invested in low emissions technologies including solar and clean hydrogen by 2030. The plan will also include carbon offsetting and reducing the costs of low emissions technologies. Prime Minister Scott Morrison, in launching the plan, stated that the target of net zero carbon emissions by 2050 would not see the end of coal or gas production or exports, and would not increase energy bills. He also stated that it would also not be a “set and forget” program, with five-yearly reviews from the Productivity Commission. The first review is set for 2023 and will look at the socio-economic impact of the plan.

NEW ZEALAND
New Zealand unveils plans to reopen borders to foreign travellers
(28 October 2021) The New Zealand government plans to partially reopen its borders to foreign travellers amid growing pressure from New Zealanders stranded overseas by strict travel restrictions. Starting on 8 November 2021, arrivals from the Pacific island nations of Samoa, Tonga, Vanuatu and Tokelau will be granted quarantine-free travel, while other low-risk countries would be considered in early 2022. It was also announced that the 14-day hotel quarantine period currently imposed on all overseas arrivals would be slashed to seven days in November and eventually replaced with home isolation. The goal was to move towards home isolation in the first three months of 2022, once 90% of New Zealand’s population is fully vaccinated.