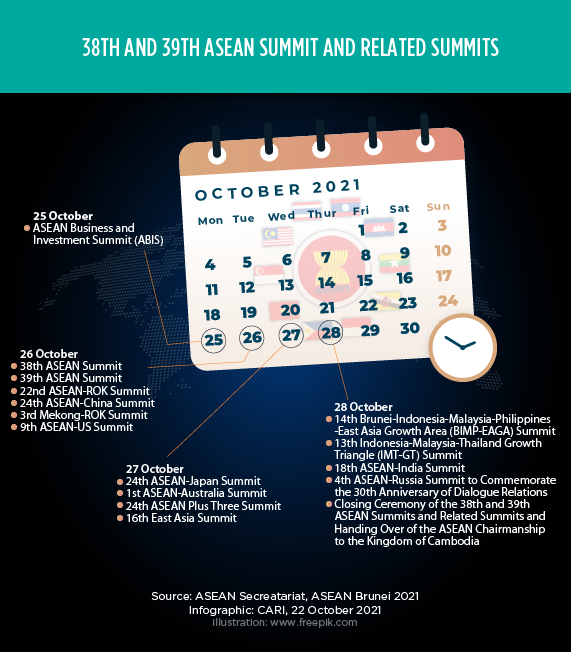 ASEAN
ASEAN excludes Myanmar junta leader from summit in rare move
(17 October 2021) The Association of Southeast Asian Nations (ASEAN) announced this week that it will exclude Myanmar’s military leader Min Aung Hlaing from its upcoming regional summit, citing the lack of progress made by the military to restore peace in the country following its February coup. The announcement was made following an Emergency Foreign Ministers’ Meeting on 16 October 2021. Brunei, the bloc’s current chair, says that a non-political figure from Myanmar will be invited instead. The 38th and 39th ASEAN Summits and Related Summits will be held from 26 to 28 October 2021.

ASEAN
ASEAN ministers endorse regional Fourth Industrial Revolution strategy
(19 October 2021) The ASEAN Economic Community (AEC) Council Ministers have endorsed the Consolidated Strategy on the Fourth Industrial Revolution (4IR) for ASEAN at the 20th AEC Council Meeting held on 18 October 2021. The strategy provides the bloc with a “whole-of-ASEAN” approach in taking advantage of the 4IR through three areas: technological governance and cybersecurity, digital economy, and digital transformation for society. The initiative also aligns with the region’s COVID-19 recovery strategy, the ASEAN Comprehensive Recovery Framework (ACRF), which was adopted in 2020. The strategy is expected to be adopted at the upcoming ASEAN Summit.

VIETNAM
Vietnam ratifies the ASEAN Trade in Services Agreement (ATISA)
(18 October 2021) Vietnam ratified the ASEAN Trade in Services Agreement (ATISA) on 18 October 2021, making it the second ASEAN Member State to do so following Singapore’s ratification of the same on 5 April 2021. The agreement, which was first signed by ASEAN Economic Ministers on 7 October 2020, will replace the existing ASEAN Framework Agreement on Services (AFAS) when it comes into force. ATISA is expected to provide a more stable and predictable environment for service suppliers in the region as it uses a negative listing approach which would, by default, apply the same set of rules to all service suppliers unless otherwise specified.

CAMBODIA
Cambodia reopens e-visa applications for international visitors
(20 October 2021) Cambodia’s e-Visa scheme “Visa T” reopened applications on 19 October 2021. Once approved, these single-entry visas will be valid for a period of three months, during which visitors can stay for up to 30 days upon arrival. Visitors will need to make a US$1,000 deposit to cover their stay in one of four designated quarantine hotels before arrival. Fully vaccinated visitors will be quarantined for seven days, while those not fully vaccinated or unvaccinated will be quarantined for 14 days. Visitors will also need to produce a negative PCR test result and vaccination certificate upon arrival.

SINGAPORE
Singapore’s Vaccinated Travel Lane scheme takes flight this week
(18 October 2021) The first flights under Singapore’s Vaccinated Travel Lane (VTL) scheme arrived from Amsterdam and New York on Wednesday and Thursday respectively following the VTL’s coming into force on Tuesday, 19 October 2021. Visitors under the VTL will only need two COVID-19 swab tests to enter Singapore, down from the current four, and they need not be quarantined upon entering. The first swab test will be done 48 hours pre-departure and the second on arrival. Eight countries have been authorized under the VTL: Canada, Denmark, France, Italy, the Netherlands, Spain, Britain and the United States.

ASEAN
Three ASEAN markets rise in EY’s global renewable energy index
(19 October 2021) The Philippines, Vietnam, and Indonesia have moved up EY’s latest bi-annual index which ranks the top 40 most attractive markets for renewable energy investment and deployment opportunities. The Philippines came in 27th place thanks to the government’s target to reach 35% in renewable energy by 2040 and its National Renewable Energy Board’s new offshore wind plan. Vietnam rose to 29th place backed by its rising use of hydro, wind, and solar power. While Indonesia rose to 39th place due to its “more ambitious renewables targets and positive policy developments to retire diesel and coal power plants”.

SOUTH KOREA
South Korea and Cambodia to sign bilateral free trade agreement
(20 October 2021) The Cambodia-South Korea Free Trade Agreement (CKFTA) will be signed and virtually endorsed by the countries’ respective trade ministers on 26 October 2021. Both countries are also members of the Regional Comprehensive Economic Partnership (RCEP). Cambodia will lift tariffs on 93.8% of its goods traded while South Korea will lift tariffs on 95.6% of the same once both the CKFTA and RCEP come into effect. Over 10,000 Cambodian goods enjoy tariff-free access when exporting to South Korea, while Cambodia will also increase its imports of electronics, pharmaceuticals, and automotive parts from South Korea.

NEW ZEALAND
New Zealand and the United Kingdom reach agreement on trade deal
(21 October 2021) The United Kingdom (UK) and New Zealand have agreed in principle to terms for a bilateral free trade agreement following 16 months of negotiations. The UK believes that the bilateral deal would “pave the way” for them to join the Comprehensive and Progressive Agreement for Trans-Pacific Partnership (CPTPP), of which New Zealand is a member and of which the UK hopes to join by the end of 2022. The deal is expected to expand New Zealand’s access to the UK’s agriculture sector, and lower or remove taxes on cars, buses, textiles, and metals.

AUSTRALIA
Australia-UK free trade agreement could see more British labour imports
(18 October 2021) Australian trade minister Dan Tehan, who is in London finalizing the details of the Australia-UK free trade agreement, has indicated that the country could see an influx of British workers to fill labour shortages caused by Australia’s closed borders during the pandemic. The deal, which is expected to come into force on 1 July 2022, will also make it easier for people to live and work in both countries. According to Australian labour statistics, private sector vacancies were 49% higher than at the start of the pandemic, while public sector vacancies were 27% higher.