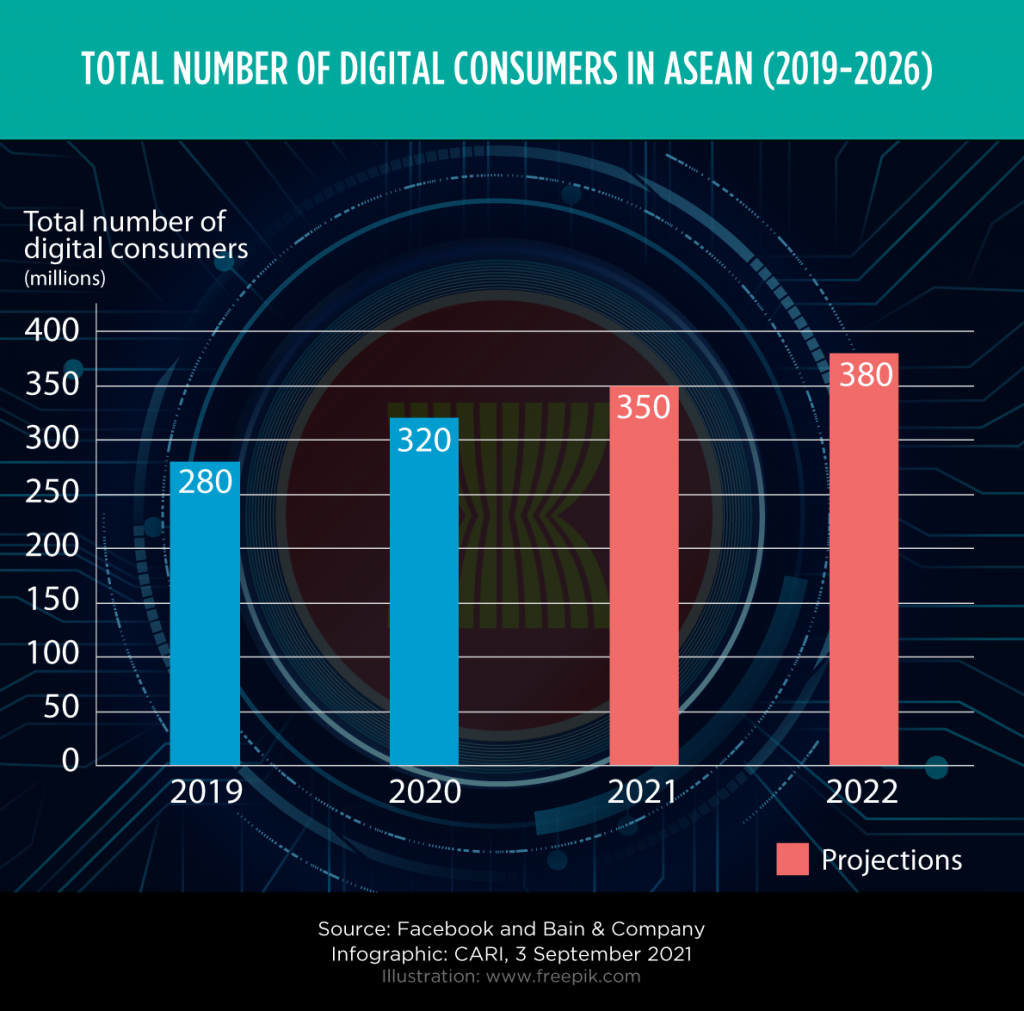 ASEAN
Southeast Asia region added 70 million new online consumers since start of COVID-19 pandemic
(31 August 2021) According to a recently published report by Facebook and Bain & Co, the Southeast Asia region added a total of 70 million new online consumers since the start of the COVID-19 pandemic. Surveying some 16,000 people across Singapore, Malaysia, the Philippines, Indonesia, Thailand and Vietnam, they projected that by the end of 2021 each of these countries will have 70% or more of its adult population as digital consumers. Online spending per person in 2020 was US$238, and is expected to reach US$381 by the end of 2021. 22% of respondents cited social video as their top channel for discovery. Internet and tech startups grew to dominate venture capital and private equity funding in ASEAN, commanding 88% of deals by value in the first quarter of 2021, up from 75% a year earlier. Financial technology, or fintech, was the dominant sub-category, composing 56% of tech funding and spanning such services as buy-now-pay-later, peer-to-peer lending, digital wallets and cryptocurrency.

MALAYSIA
Malaysia plans to reopen resort island of Langkawi to locals under travel bubble plan
(02 September 2021) The Malaysian government plans to reopen the resort island of Langkawi to locals under a travel bubble plan from 16 September 2021 onwards. Other destinations in Malaysia will be allowed to reopen once their local vaccination rate reaches 80%. Despite being Southeast Asia’s COVID-19 hotspot, the virus’ effective reproduction rate, or R-naught, has fallen below 1 nationwide for the first time in a few months due to high vaccination rates. 64% of Malaysia’s population have been fully vaccinated, and the average vaccination rate among adults in each state in Malaysia is expected to reach 80% by the end of September 2021. Melaka state will move into the second phase, and Negeri Sembilan into the third stage of the national recovery plan starting on 04 September 2021.

INDONESIA
Indonesia’s central bank to require lenders to disburse at least 30% of their loans to small companies by 2024
(02 September 2021) Indonesia’s central bank will require Indonesian lenders to disburse 30% of their loans to small companies by 2024, as part of a broader effort to revive slow credit growth within the country. Banks will be required to allocate 20% of their total loans to micro, small and medium enterprises next year, with the proportion gradually increasing to 25% in 2023 and to 30% in 2024. The central bank also intends to broaden the types of loans that banks can disburse to small companies, including direct lending, supply-chain financing or securities purchases. Banks will be able to meet their threshold by lending money to non-MSME and non-financial institutions that will subsequently channel the funds to their MSME partners. The new rules are effective 31 August. Loan-growth in Indonesia in July 2021 was only 0.5% year-on-year, despite record-low interest rates.

THE PHILIPPINES
Grab Holdings to set up online supermarket in the Philippines to boost user growth
(03 September 2021) Grab Holdings Inc is set to launch an online supermarket in the Philippines to boost user growth, as the company seeks to capture broader opportunities in the food services market. Grab plans to allow consumers in the Metro Manila region to be able to order vegetables, meat, seafood and other groceries via the Grab app for next day delivery. The company already provides online grocery services in Malaysia and Singapore, and plans to enter Thailand in 2021. The online grocery market in Southeast Asia is expected to almost triple to US$11.9 billion in 2025 from US$4.1 billion in 2020. Southeast Asia’s online meal delivery services are also expected to triple, reaching US$28 billion by 2025.

BRUNEI DARUSSALAM
Brunei Darussalam to remain in semi-lockdown until 03 October 2021 due to ongoing COVID-19 situation
(02 September 2021) Brunei Darussalam is to remain in semi-lockdown until 03 October 2021 due to the ongoing COVID-19 situation, which has not yet been brought under control. This is the second time that the semi-lockdown has been extended, more than three weeks after reporting its first locally transmitted cases in 15 months. Brunei has tallied a total of 2,621 coronavirus cases in its ongoing second wave, making up 88.5% of Brunei’s overall COVID-19 tally. As well, the Bruneian government also stated that from 06 September 2021 onwards, COVID-19 patients who have recovered 14 days after their diagnosis will no longer be required to undergo home isolation for 21 extra days. However, COVID-19 patients who were discharged before the end of their 14-day isolation must complete their quarantine period at home.

AUSTRALIA, INDONESIA
Australia to deliver 500,000 COVID-19 vaccine doses to Indonesia as part of strategic partnership
(03 September 2021) Australia will be delivering 500,000 COVID-19 vaccine doses to Indonesia as part of Canberra’s strategic partnership with the latter. These vaccine doses are the first installment of Australia’s commitment to share 2.5 million AstraZeneca doses with Indonesia in 2021, and are an important component of Australia’s larger health response package for Indonesia (announced in July 2021), adding to the 1,000 ventilators, 700 oxygen concentrators and 20,000 rapid antigen tests already delivered. To date, Australia has shared over 2.5 million doses with the Indo-Pacific region, as part of a total commitment to share 20 million doses by mid-2022. In addition, Australia is also providing US$101.9 million to support Indonesia’s national vaccine rollout through the US$523 million regional Vaccine Access and Health Security Initiative.

SOUTH KOREA
South Korea to maintain aggressive fiscal spending in proposed budget for 2022
(31 August 2021) South Korea’s government has proposed a budget for 2022 that would maintain aggressive fiscal spending in order to deal with the fallout caused by the COVID-19 pandemic. The finance ministry proposed spending US$523 billion in 2022, a rise of 8.3% from 2021 that would increase government debt to 50.2% of GDP, from 36% in 2017. The proposed record spending comes as the government struggles to rein in surging household debt and rising income inequality, with South Korea recently becoming the first big Asian economy to raise interest rates since the start of the pandemic. Many self-employed people, which make up almost a third of the Korean workforce, are under mounting financial pressure after tougher coronavirus restrictions, including tighter social-distancing measures, slashed their incomes.